Chair and Professor of Sociology 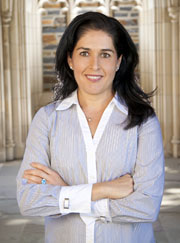 Jen’nan Ghazal Read is Professor and Chair of Sociology and a faculty affiliate of Global Health at Duke University. Dr. Read is a Carnegie Scholar whose research focuses on the assimilation of Arabs and Muslims in the U.S. and Western Europe, specifically on issues of political integration, gender relations, and health. She has published widely on these topics, including a book and numerous articles. She has appeared as an expert on numerous national and international shows, such as the Charlie Rose Show, National Public Radio, and Al-Jazeera English. She has received several prestigious awards and grants, including ones from the Carnegie Corporation of New York, Russell Sage Foundation, and U.S. Census Bureau.

Read about how Dr. Read’s first-generation background has shaped her academic journey here.