[1] Reprinted and adapted by permission of American Scientist, magazine of Sigma Xi, The Scientific Research Society

The most basic form of contrast can be derived from 129Xe gas MRI is to image regional ventilation. This is illustrated by the images below. The image on the left shows a conventional MRI scan of a patient with chronic obstructive pulmonary disease (COPD). This image detects the hydrogen in tissues (water) and therefore provides little detail in the lung. The image on the right is the same patient who has inhaled hyperpolarized 129Xe gas. This image slice reveals a large emphysematous bullae in the right upper lung as well as regions of impaired ventilation in the left lung. Hence, the gas MRI scan permits us to directly image the function of the lung to add to the anatomical picture. 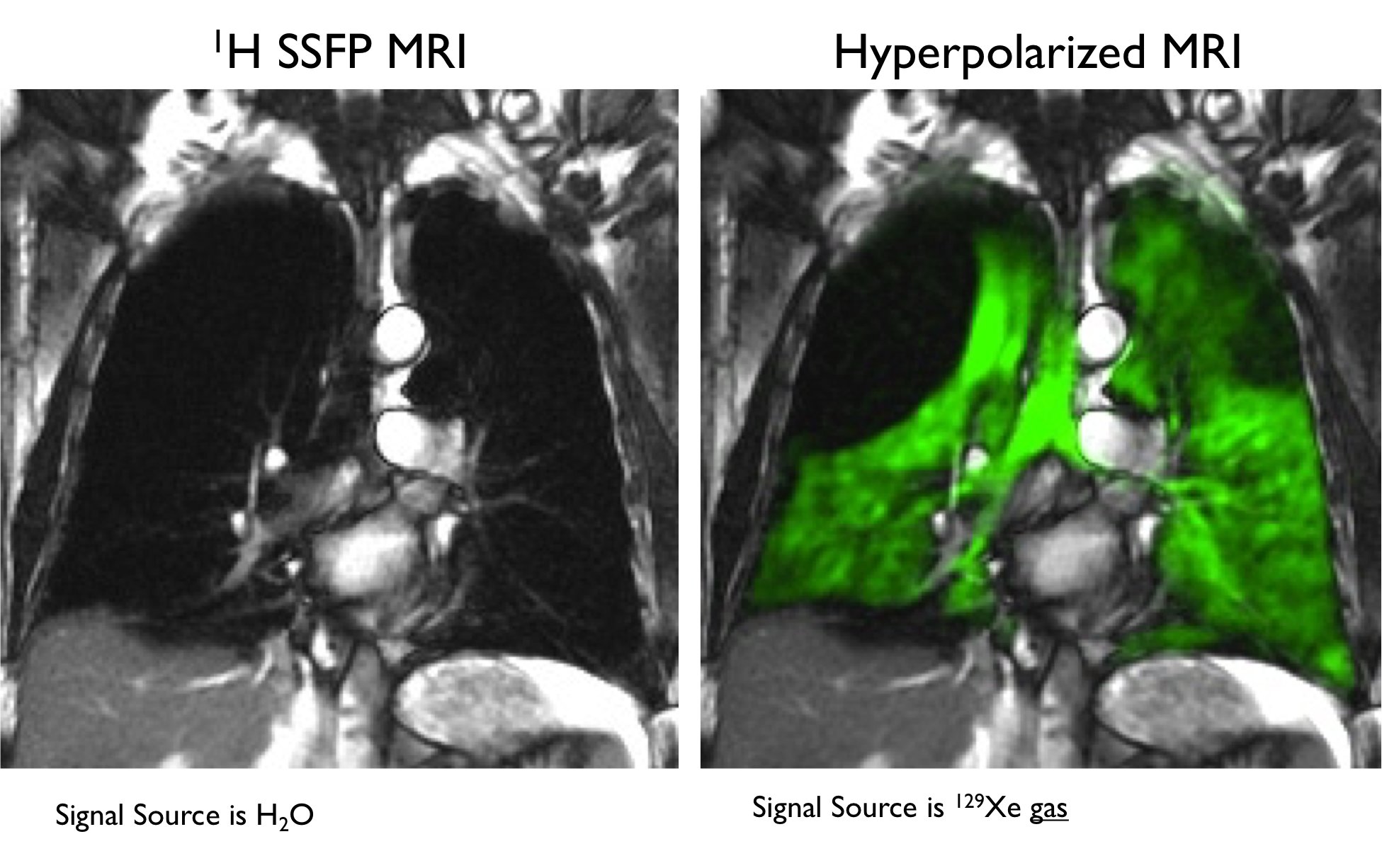 The image below illustrates a representative image seen in healthy young lungs. The image is characterized by a homogeneous distribution of signal, interrupted only by pulmonary vascular features, and the heart that exclude 129Xe signal.

By contrast, the image below illustrates the type of image seen in a patient with asthma. This image is characterized by patchy regions where signal is absent. These are known as ventilation defects and are a powerful marker of ventilation impairment.

While images are interesting and beautiful to look at, it’s important to report these results in a quantitative fashion. Below, we illustrate a quantification method that our laboratory has developed to transform the grey-scale images into quantitative maps. This method takes advantage of the conventional MRI scan that shows no signal in the lung, because it allows us to delineate the thoracic cavity. Such quantification is helpful for evaluating the level of disease burden or to track disease progression and therapeutic response. In these images, red colors represent ventilation defects, orange shows low ventilation, greens show normal ventilation and blues show high ventilation.

Two important aspects of any marker, imaging or otherwise, are its sensitivity to disease and reproducibility. We have demonstrated numerous cases in which the technology can detect substantial ventilation defects, even in patients who appear to have normal pulmonary function tests. We have also demonstrated cases of perfectly normal ventilation patterns in patients who appear to have abnormal pulmonary function tests. This is what makes the technology particularly intriguing. However, equally important is establishing that the method provides reproducible readings each time. This is illustrated in images acquired in an asthma subject at baseline, and again 10 minutes later. It shows a rather remarkable reproducibility. In a study of 28 patients, the reproducibility of 129Xe MRI ventilation defects was found to be ±1.5% compared to ±7% for pulmonary function tests. Such high reproducibility means that studies of new interventions can be conducted with smaller numbers of subjects over shorter time scales.

While ventilation is a critically important aspect of pulmonary function, it is only part of the story. The ultimate job of the lung is to transfer oxygen from airspaces to blood, and to remove CO2 from blood to airspaces. Remarkably, 129Xe has been endowed with some unique properties that enable us to image its transfer from airspaces to blood in a single breath-hold. Please check other portions of this website for details.