As part of our NSF-funded study on coevolution of mycorrhizal fungi in the genus Suillus with members of the plant family Pinaceae, we just finished setting up a spore-print bioassay pairing 30 Suillus species with 10 different host trees from the conifer family Pinaceae.    The seedlings will be harvested after 2-3 months to test for mycorrhizal specificity with different groups of confier hosts.  Molina & Trappe (1982) first demonstrated  strong patterns of mycorrhizal specificity (compatible/incompatible) for 27 species of ectomycorrizal fungi grown with 7 species of Pinaceae hosts.  In our experiments, we are investigating molecular-based interactions that result in mycorrhizal compatibility  between Suillus with different species white pines (Pinus subg. Strobus), hard pines (subg. Pinus), Douglas fir (Pseudotsuga spp.), larch (Larix sp.) and spruce (Picea sp.).  See Liao et al. (2106) for more on molecular genetics of mycorrhizal compatibility/incompatibility! 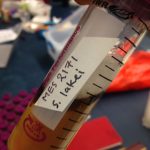 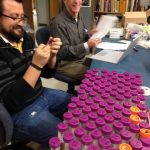 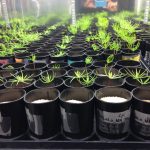 Why 98 and 10?  That’s exactly how many seedlings (980) fit inside two of our R-chambers in the Duke Phytotron (plus uninoculated control plants).    Our team has collected spore prints and cultures from over 500 collections of Suillus from pine forests around the world.  It was hard deciding which spore prints to test!