Highlights from the 13th European Conference on Fungal Genetics

April 1-6 – 13th European Conference on Fungal Genetics, Paris, France
Just returned from a very stimulating meeting with 800 European fungal biologists at ECFG13.  How can anyone refuse a chance to visit Paris and hear about the latest breaking advances in fungal genomics?  Sunny, Jessy, Greg and I all presented at the congress, and had a chance to meet up with our european colleagues including several former lab members.  And see a little of Paris! 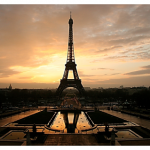 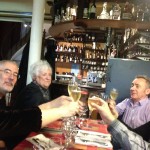 Dinner with Meredith, Joey and Bernie 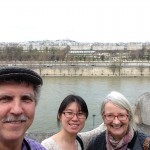 On balcony of Musee D'Orsay 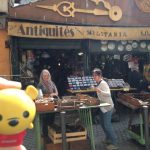 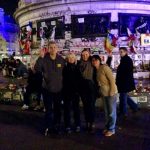 At the ECFG13, I was invited to speak at the contributed session on ecological and population genomics of fungi.  Members of our lab also organized a pre-meeting workshop on fungal bacterial interactions and presented several posters.  The abstracts are below

VILGALYS Rytas, LIAO Hui Ling, BONITO Gregory, HAMEED Khalid, GRIGORIEV Igor, SCHADT Christopher, LABBE Jessy, TUSKAN Gerald, TSCHAPLINSKI Timothy, MARTIN Francis
Metagenomic study of plant-fungal interactions between Populus trichocarpa with its rhizosphere fungi
A highly diverse community of fungi occurs within roots of forest trees that includes beneficial (mycorrhizal) mutualists, saprophytes, pathogens, and other guilds whose function is unknown. Several species of endophytic fungi have been found to have a growth-promoting effect on Populus and other plant hosts, though the molecular bases of these effects still are not fully understood. Genome sequencing and targeted metatranscriptome experiments are being undertaken for a key set of Populus root-associated fungi to aid in the understanding of mechanisms involved in plant-fungal interactions. We interrogated the ecological function of two fungal species Mortierella elongata PMI93 and Ilyonectria europeae PMI82 using metagenomic approaches including RNAseq, metabolomics, and proteomics. P. trichocarpa plants were grown from cuttings and inoculated using forest soils (soil bioassay) and also individually inoculated with either PMI93 or PMI82. After 3 months growth, comparative metatranscriptomics reveal that both PMI93 and PMI82 are both most active in the rhizosphere (rhizophytic activites) versus the root systems (endophytic activities). Gene profiles of P. trichocarpa roots showed significant changes in response to inoculation with M. elongata PMI93 but not to Ilyonectria PMI82. Inoculation with M. elongata was found to alter plant-environmental interaction and cell signaling, altering the predominant plant genes for nutrient uptake, extracellular secreted proteins and plasma membrane receptor activities, receptor/kinase transduction followed by transcriptional regulation. Up regulation of genes for specific nutrient hydrolysis/uptake and growth promotion, and down regulation of genes for LRR-receptors/kinases, strongly suggest that M. elongata manipulates plant defense to equilibrate the energy resource for plant growth. The functional activity of Mortierella and Ilyonectria in the root and soil systems will also be discussed.

POSTER SESSION ABSTRACTS
UEHLING Jessie, DIETRICH Fred, OHM Robin, GRIGORIEV Igor, NOLAN Matt, LABUTTI Kurt, LABBE Jessy, MARTIN Francis, BONITO Gregory, VILGALYS Rytas
Transcriptome sequencing sheds light on host-symbiont interactions between zygomycete Mortierella elongata and endosymbiont C. Glomeribacter sp.
Several research groups have recently investigated the ubiquity and dynamics of bacterial endosymbionts living inside of fungal cells. There are a few studies on fungal hosts belonging to Asco- and Basidiomycota, however, the best-studied examples of endosymbiosis in fungi are from plant- associated zygomycetes. Best studied in the Arbuscular Mycorrhizal (AM) fungi, these endosymbionts are thought to be obligate, long-term residents of the intracellular environment where they may contribute to both fungal and plant health, although the direct or indirect nature of these interactions remain has yet to be experimentally evaluated. We isolated a strain of Mortierella elongata AG77 (Zygomycota, Mucormycotina, Mortierellales) from the rhizopshere of Populus deltoides. We found that M. elongata AG77 harbors a strain of Candidatus Glomeribacter sp., and we have assembled and annotated genomes for both the host fungus and its resident endosymbiont. The genome of C. Glomeribacter sp. is similar to other publicly available genomes, but also has unique features potentially suggesting distinct functionality. In an attempt to understand the nature of the interaction between fungal host M. elongata and endosymbiont C. Glomeribacter sp. we used an antibiotic treatment to create a strain cleared of endosymbiont populations for comparative studies. Here we present comparative host fungal transcriptomes in the presence and absence of obligate endosymbiont C. Glomeribacter sp. The following questions were addressed through this work: Does endosymbiont presence affect fungal host functioning? Do host-endosymbiont dynamics of Mortierella-Glomeribacter differ from those of the obligate plant associated AM fungus Gigaspora- Glomeribacter?

BONITO Gregory, HAMEED Khalid, BUSBY Posy, BENUCCI Gian Nm, TUSKAN Gerald, SCHADT Christopher, VILGALYS Rytas
Using common gardens to study effects of soil origin and host genotype on the Populus and Pinus root mycobiome
Populus is a model woody plant species important ecologically as a pioneer and economically as a biofuel and fiber crop. Nutrition and aboveground biomass of Populus is largely dependent upon belowground root growth and interactions with ectomycorrhizal, arbuscular mycorrhizal and endorrhizal fungi, as well as prokaryotic organisms and other soil fauna. Our research utilizes trap- plant experiments and characterizes fungal communities through next generation amplicon sequencing. In this experiment we chose a panel of Populus trichocarpa DOE-BESC reference genotypes, selected on account of their productivity, lignin type, lignin content, and geographic origin. Cuttings were grown in triplicate in soils collected from four common garden sites in the Pacific Northwest, a natural Populus soil from NC and in sterile sand as control group. Plants were grown for 5 months and then roots were harvested, washed, and fungal communities were characterized by MiSeq amplicon sequencing of the ITS & LSU rDNA. Y-diversity of fungal communities on BESC reference genotypes shows strong biogeographic structuring. Uninoculated control plants were significantly shorter in height (P<0.01) and their microbiome consisted of fewer taxa. Fungal community similarity on Populus roots grown in different soils follows a decay by distance model, although some root-assocated fungal taxa are widespread geographically. Host species and genotypes may influence fungal and bacterial community structure in a context dependent manner, and although particular host-genotype x fungal species interactions were documented, these were most pronounced in soils harboring higher fungal biodiversity and were not related to any particular preselected host character.

STAJICH Jason, SPATAFORA Joseph, GRIGORIEV Igor, MARTIN Francis (4), HENRISSAT, Bernard, 1000 FUNGAL GENOMES PROJECT consortium (including V lab members)
Genome evolution in early diverging fungi from the 1000 fungal genomes perspective
Transitions in morphological complexity, trophism, and lifestyles have occurred throughout the evolution of the fungal kingdom. To examine these changes in the context of genomic changes requires a well-resolved phylogeny of the fungi and a dense sampling of reference genomes. We have made efforts to improve the available diversity of fungal genomes through the 1000 fungal genomes project (1KFG; http://1000.fungalgenomes.org) and other efforts. The first analysis of 350 of these genomes has been use to construct a resolved phylogeny of the fungi with new understanding of the early branching zoosporic (chytrid) and zygomycete fungi. We find support for multiple, early diverging lineages that include zoosporic fungi, two clades of the zygomycetes we have named Zoopagomycota and Mucoromycota which show long standing symbioses with animals and plants respectively. The arbuscular mycorrhizal fungi (Glomeromycota) group with strong support within the Mucoromycota not as separate lineage. Comparison of gene content to reconstruct changes that lead to emergence of complex multicellular forms reveal the likely complex ancestor of the Dikarya fungi. We also examined the multiple evolutionary losses of the flagella inferred from the phylogeny and how that compares to the loss or retention of genes necessary for the flagellar complex and we identify additional genes that show similar retention patterns.