For an impending research project, I scoured YouTube for content relating to the relatively new concept of land acknowledgements. Although I expected to find a video which recognized the importance of recognizing genocide and land theft, instead the most popular video was a blazing critique of land acknowledgements by a non-Native Canadian college student. Before finding this video, I didn’t believe that land acknowledgements were so controversial. But the 15 likes for each dislike proved I was incorrect. At first, I even agreed with parts of the video.

I believe that YouTube videos provide a general pulse on public perception. Thus, in this essay, I tackle this video’s main arguments. Many of my grievances stem from the creator’s inability to fully empathize with the Native people: a symptom of white privilege.

This is incorrect on many levels. There have actually been many “plans” to return land to Native people, like two sperate bills to return the Black Hills to the Lakota. Unfortunately, they both failed. Ironically, the creator’s statement emphasizes how many people are simply unaware about land return efforts, and how a land acknowledgement could raise awareness. Similarly, many people simply do not realize that land was stolen from Native people. I’m a Native person, and I didn’t realize how the government committed genocide against indigenous people in my area until I heard a land acknowledgement.

Of course, the “no existing plan” argument is also logically incoherent. It is akin to saying, “if we haven’t immediately achieved our goal of land return, then we shouldn’t bother with the first step.” The only way that Canada or the United States will begin to give land back is by publicly acknowledging that land was stolen in the first place. Neither the United States nor Canada, nor many institutions within these countries, have fully acknowledged land theft and genocide of Native people. A lack of public awareness about land theft in the United States and Canada suggests that both countries are actively trying to avoid grappling with Native realities. For example, here is a map of lands that the Indian Claims Commission categorizes as stolen: 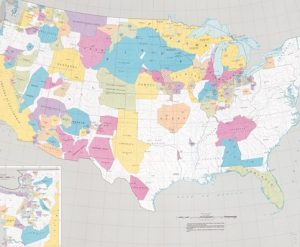 But most American citizens are unaware of this, and the vast majority government and non-government entities do not fully recognize that they exist on stolen land. Since the majority of people, our government, and other entities do not embrace this truth, returning land to Native people will be impossible. Land acknowledgements are crucial to addressing this unbelievable reality. Only then can constituents be fully informed about indigenous injustices and support policies and politicians that help Native people.

The creator of this video probably didn’t go to a school where white students made up 2% of their class, but that’s the makeup of my sophomore class. Because of this, I often feel like my Native story is being left out in favor of white stories. But when a professor gives a land acknowledgement, I sigh in relief because I know that my classmates and I are starting out in the same place. I will be thinking about violence against indigenous people whether or not there’s a land acknowledgement. However, when there’s a land acknowledgement, my classmates and I start from common ground and can engage in better dialogue.

What if white Christian Americans or Canadians were removed on the Trail of Tears, and half of them died along the way, mothers clutching their dead babies? What if governments and academia fought for centuries to cleanse these stories from historical record so that land return and reparations were impossible? Wouldn’t they be calling for land acknowledgements, too? Wouldn’t anyone? The difference would be that no one would argue that “white Christian land acknowledgements” are examples of “pointless political correctness.” It would just be the obvious and moral thing to do. But when Native people threaten the white Christian majority’s illegitimate claim to the continent, some retaliate because they do not want to grapple with the reality that they do not, in fact, deserve to be here. By no legal, moral, or logical definition do any settlers have legitimate claims to North America. “Settler-belonging” is a centuries-old fiction that the United States and Canada preach so that their legitimacy cannot be questioned.

Last, this non-Native creator voiced the grievance of, “My parents and grandparents have lived here for a long time. I love them, and I will not think of them as perpetrators of land theft and genocide.” But this does not change history. The creator’s family did participate in eradicating and displacing Native people from their lands, directly or indirectly. This is not to belittle the creator or others who may feel this way. I mean, who wants to believe the worst about their families? Hey, I’m a Native person, but many of my ancestors did the same thing. Hell, I’m related to Thomas Jefferson, the man who laid the groundwork for the Indian Removal Act.

Do I have to reconcile the two, Native and settler? Of course not, because that’s impossible. I must live with the tension that I am both indigenous and a settler. Some of my ancestors have lived in North America for tens of thousands of years, and some of them committed unfathomable atrocities against Native people. But realizing this tension is crucial in working through historical atrocities.

And yes, it is possible to love your family of settlers while still fully recognizing the things they did to further the eradication of Native people. Love and hate need not be absolutes. People are complex and recognizing one’s humanity involves acknowledging mind-boggling complexities and contradictions, even when it’s difficult.

So, after all this, you might be surprised to learn that I agreed with something about this video. While most of these arguments stem from white privilege, I believe the creator does make the useful point, “land acknowledgement could just be a way for institutions and government to symbolically act instead of taking real action.”

The creator tells a story about how they wrote a paper on this topic in college, and that it received a good grade.** Although the creator erroneously uses this as evidence to support every claim made in the video, this idea has some merit. In fact, I would go as far to say that the creator is correct, and that land acknowledgements are currently being used as symbolic excuses to avoid real efforts to support Native people.

** Unfortunately, the creator was afraid that they would receive a bad grade because their TA looked/was indigenous. I must address this because it is blatantly racist. Just because someone may look/be indigenous does not mean that they will think in a certain way.

And it mirrors other ways that the U.S. government acts symbolically. One of the most classic examples of symbolic government action is when Congress or the President decides to “create a commission” to investigate an issue. For example, if there is a public outcry for greater gun control, Congress or the President could create a commission to gather evidence and collect testimonies from people affected by gun control legislation. While the goal of these commissions is to provide research to advise legislators on the best policy, often politicians use a commission to give the impression of action while making no substantial efforts. This is what happened with the 1988 National Commission on AIDS, and countless others.

However, these symbolic commissions are also often a first step toward radical policy change. For example, successful reparations for interned Japanese Americans began with a commission. That’s why many change-makers may support commissions, even if they’re only symbolic. It will inevitably move policy forward, even if it’s only by a small amount.

To illustrate, if I am a staunch conservative, I will likely not commit to reparations for Japanese Americans, because it contradicts belief in less government spending. However, agreeing to a commission could have two powerful effects. First, I could be swayed to vote in favor of Japanese reparations after hearing the heart wrenching accounts from survivors of internment. Second, I have already taken a baby step toward reparations by agreeing to the commission. Now, I might feel personally responsible for the outcome of the commission and be more inclined to support policy.

Further, land acknowledgements help define indigenous land theft as a problem that governments and institutions can solve. In the world of policy, this idea goes by the name of “problem definition.” The U.S. has actively fought people who try to define “returning lands and to indigenous people” as a problem that the government and institutions can work to solve. Efforts made to return the Black Hills to the Lakota failed even though proposed legislation interfered with no private or public interests and even established a national park.

It’s worth noting that Canada, quite unlike the United States, has taken more radical steps to acknowledging Native people’s history and present. In fact, the 2015 Truth and Reconciliation Commission (for indigenous people) is practically what gave birth to land acknowledgements. While there hasn’t been a radical Canadian movement to give back land or award reparations, I would vehemently argue that both land acknowledgements and the commission is crucial for problem definition and incremental change.

528 years of genocide and land theft are not going to be solved immediately. That’s why there’s no massive plan for land return currently in place. I mean, look how much resistance mere land acknowledgements get. Land return would send opponents of land acknowledgement into overdrive. But it takes time, truth, and reconciliation to positively advance policy. It takes intentional education and open dialogue to fight revisionism.

I would like to leave you with this: Where’s the U.S. Commission on Truth and Reconciliation? I believe it’s because our government actively fights against indigenous issues being defined as problems. How else could 30-40% (~69,000 people) of Dine live without tap water when the global average of people without tap water is 9%? How can it be a struggle for me to learn about the Trail of Tears or Grandma Great’s assimilation experiences or that Native Nations are the same political entities as any colonial power?