An Ode to the Strange World of Corporatism and Modernity 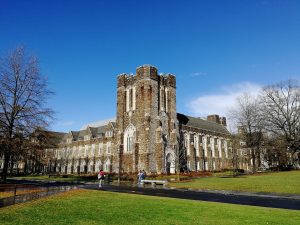 A mere five minutes away from my palace in Crowell is Few Quad, which can only be described as the Siberia to Crowell’s Moscow. Few’s desolate, labyrinthine halls are neither luxurious nor modern, and the Slytherin-esque green and black marble tiles on the walls cry for renovation every day. But their calls fall on deaf ears. All across Duke, residence halls, lecture halls, auditoriums, and common spaces exist as reminders of the grotesque design sensibilities of decades past. Carpets in dorm rooms, windowless classrooms, drab and nondescript color schemes – some corners of Duke are like a pick-em assortment of poor design choices.

As an elite private university with a nearly $10-billion endowment and a wide pool of esteemed thinkers and planners, Duke is, of course, equitable and deliberate with its architectural planning. The seemingly hodgepodge nature of renovations around campus probably has some explanation. Surely the opportunity costs of the Crowell renovation are commensurate with its importance on campus (not very important).

The $52.7-million price tag on clarknexson.com says otherwise. While residents of the lowly Edens 3B live in squalor, Duke spent tens of millions of dollars turning Crowell into Floyd Mayweather’s house. Though I’m tempted to generate some sort of analogy to American income inequality, this “inequality”, if you will, is even stranger. American income inequality makes a lot of sense when you look at America’s history and the general trend of growing inequality over the last several decades. But Duke’s inequality makes no sense. Even if different groups are in charge of maintaining and renovating different parts of campus, there are still tradeoffs to be made between development in different places. Why are some buildings so much nicer than others?

To me, the massive disparities between the buildings at Duke lay bare the nebulous, inaccessible, and most importantly random system of decision-making that produced much of the physical infrastructure around us. Expensive and hugely consequential decisions are made all the time, and when we see their frequently arbitrary, occasionally malicious impacts, we sometimes pause to think about where these decisions came from. But these decisions often happen on immense scales (e.g. tens of millions of dollars for the Crowell renovation) and behind so many closed doors that most of us have moved well past the point of investigating them. The clandestine decision-making processes and their far-reaching consequences together amount to an absurd world-building process so far outside of the layperson’s understanding that, were it to be interrogated, would surely lead to madness on the part of the interrogator. Rather than try and examine these systems, I want to write a brief ode to the absurd world of corporate construction and building that I found when I looked into the Crowell renovation.

When you Google “Crowell quad renovation Duke University”, you don’t get much in the way of official press releases, Duke advertising, or documentation of the renovation’s history. In fact, none of Google’s first three links are links to Duke websites. Though Duke spent upwards of $50 million renovating a student dorm, they’re not doing much to advertise the renovations to potential students.

The first three search results each direct you to a (seemingly) different company that presumably had some role in the Crowell renovation. First is clarknexson.com, the website of North Carolina-based architecture firm Clark Nexsen. The language on Clark Nexson’s website strikes exactly the same tone that the name “Clark Nexsen” does: generic and vaguely, implacably modern. The “about us” page on the Clark Nexsen website has many words but tells us very little: “we see design as more than steel and glass; more than concrete and brick; more than lines on paper. At every intersection of every discipline we offer, our focus is on creating spaces and experiences that profoundly impact the lives of those who interact with them”.

There’s nothing quite wrong with those statements, and yet there’s nothing quite right with them either. The website does little to explain how Clark Nexsen constructions “profoundly impact the lives of those who interact with them”, going only as far as to say Clark Nexsen “actively collaborate[s] across intersecting areas of expertise to gain new perspectives, inspire innovation, and generate groundbreaking solutions”.

Let’s unpack this award: The IIDA is a commercial interior design association with over 15,000 members worldwide. There are 35 global chapters of the IIDA; the Carolinas chapter has 6 subdivisions that serve different parts of North and South Carolina. DesignWorks is an annual awards event hosted by an IIDA Carolinas committee that awards firms for that year’s projects with project-specific awards, like “Hospitality Award Winner” or “Corporate Small Winner”. In 2019, the DesignWorks committee for the IIDA Carolinas chapter determined that ClarkNexsen had created the best multifamily housing project in that region, a stunningly specific award that demonstrates the depth, nuance, and absurdity of the construction industry. In a world dominated by corporate-speak and bureaucracy, Clark Nexsen takes the cake for the most specific, least relevant to the layperson activities that I have ever seen. The language on every website that even mentions Clark Nexsen strikes a tender balance between being completely meaningless and being intelligible only to people in the construction industry. Isolated from the rest of society and left to develop its own corporate culture, the construction industry developed its own language.

If you are on the Clark Nexsen media team, I apologize and am sure that I would have found the exact same thing had I looked into, say, the contractors that provide Duke with its security guards or really any other deeply institutionalized relationship hidden from society.

But perhaps the construction industry is uniquely prone to this particularly amusing phenomenon. The two search results after Clark Nexsen take you to lechase.com and surface678.com. LeChase (another name that’s almost too good to be true) claims that its role in the Crowell Renovations was “CM-at-risk”, and according to its homepage, LeChase “finds effective solutions for essential services.” Surface678’s rhetoric follows the same “generic verb-generic adjective-generic noun” pattern that LeChase and Clark Nexsen seem to love; the “about” section reads: “Great places are needed to nourish the human culture while allowing natural processes to flourish.” Unlike Clark Nexsen, who weren’t saying anything particularly controversial or insightful, Surface678 is saying something objectively correct and agreeable: great places are those places that aid in human existence while allowing the natural world around them to flourish. But it feels weird, because the rhetoric is what I would imagine I would get if I initially wrote the sentence in Dutch and then translated it back to English. It is, again, an example of construction-related companies writing lots of words and conveying very little meaning.

The websites of LeChase and Surface678 are also eerily similar to that of Clark Nexsen, both opting for a slightly-but-not-too-modern look that is sure to attract only the most discerning of corporate customers. If you switched the names of the firms on their homepages, I wouldn’t bat an eyelid. But they were presumably created independently by different entities, and they’re all owned by different companies or operate independently. So how did 3 different entrepreneurs end up creating the same hugely lucrative, comically generic companies?

This *quirk*, for lack of a better word, has a strangely natural quality to it: the business culture came to life and is evolving, removed from the confines of popular culture. Those of us looking in from the outside are powerless to stop it, and it quietly becomes more powerful through successive processes of evolution until it is fully incomprehensible. There’s not much for us to do about it, except marvel at the speed of its development and celebrate the unique talent required to produce phrases like “our transdisciplinary team… partners with our clients to shape ideas that transform our world”.