The World Tree as the Three Realms of the Mayan Universe 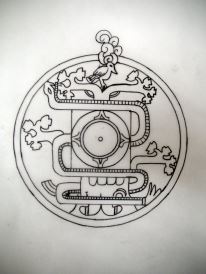 To bring together the concepts presented in our online gallery, it is important to note the sacred role of the World Tree in Mayan culture. Exploring the three different realms allows for the recognition of the coexistence and connection through this special tree as a synthesis of the beliefs of these people. Observing the representations of all of the sacred animals associated with the World Tree symbolizes the different characteristics of each respective portion of the universe.

The multi-layered symbolism of this tree connects and interweaves the three realms of the Mayan universe, reinforcing the concept of an environment where all must be in balance with one another.

In the Upperworld, birds such as the Quetzal, shown as both living within and above the Tree, represent the holiness associated with the variety of deities within this realm, all of whom possess the capability to see above the Natural World and witness the other realms as divine beings.

The Underworld contains a variety of animals that parallel the symbolic significance of this realm. Serpents and bats, among other animals, are frequently associated with this portion of the universe, being compared to the seeds of the Tree that are planted underneath the Natural World. This darkness perpetuates the fear that persists in the Underworld.

All of the animals representing the supernatural and the sacred exist in their organic forms in the Natural World. These animals are sacred to the Maya precisely because of their connections to both the Upperworld and Underworld. It is these manifestations and representations of the supernatural in this realm that demonstrate the Maya belief that nature exists as a presence more powerful than humans.

The World Tree serves as an accurate and descriptive symbol to connect the three seemingly separate but interdependent realms together in meaningful ways. This interdependency between the Upperworld, Underworld, and Natural World was respected by the Mayan people. Let us hope that our current generation will do the same.