In ancient Mesoamerica, the natural world, or the human world, was one of the three realms of the universe, existing between and controlled by the Underworld, el Inframundo or Xibalba, and the Upperworld, el cielo. An important component of the natural world is the World Tree, el árbol del mundo. It is thought to be the center of the universe and it connects the three realms and the supernatural and mortal beings that exist in them. The World Tree is often represented as a cacao tree bearing its rich fruits. Its roots extend into the underworld and its branches reach to the sky and the Upperworld. Its bounty is sacred in ancient Mayan and Mesoamerican culture.

Chocolate is a sacred food, a food for gods, warriors and elites. Its difficulty to cultivate and prepare, and its stimulating chemical properties made it seem supernatural. Humans of lower classes cultivated the cacao and prepared the chocolate for offerings for the gods and tribute for the lords and elites. The ritual offerings are to appease the gods and stay in their good graces, and give back to mother nature to keep the universe and the cosmos in balance. Rituals related to cacao are not just offerings and tributes, however. The substance itself is so sacred that every aspect of it is revered. The very act of preparing and grinding cacao beans on the metate is a ritual in its own right, requiring careful and hard labor and very specific processes. Traditionally it is the woman’s job to prepare the sacred food or drink before the men performed the offerings. The Maya Forest Garden also demonstrates the care and ritualistic cultivation of cacao. The ancient Mayans manipulated their environment and worked with Mother Nature to heighten and organize cultivation of cacao. The product was a calculated forest, often organized in careful rows and geometric patterns, to assist Mother Nature in her production of cacao.

Maize is the other most important crop to the ancient Mayans in addition to cacao. It is the staple food for humans, is plentiful and easy to cultivate. According to the Popol Vuh, the creation story of the Maya, the first men were made of maize. It is said that maize is the body of man, and cacao the blood and spirit. In the first attempt the gods used mud, in the second they used wood. It is said the surviving wooden people went on to become the monkeys and the trees. The human life cycle mirrors that of the maize crop, sprouting to life from the earth, growing and reaching towards the sky and the gods, dying and returning to the earth before sprouting once again. Although maize represents mortality, this crop is more than just alimentation when it is consumed. In ancient Mayan culture much of nature is anthromorphized and seen as being just as a live as human beings. Maize is seen to have a soul, and the act of consuming maize was sometimes referred to as “soul eating.”

Animals are essential to the connection between the three domains, as well. Certain animals such as birds, monkeys, and jaguars often represent gods and supernatural beings in Mayan belief and iconography. The animals themselves are not worshipped, rather the deities they embody and the qualities they signify are revered. For example, the Quetzal is not just a bird to the ancient Maya, but a living symbol of greatness and nobility. Monkeys were portrayed as half-brothers to the Hero Twins in the sacred Popol Vuh, and are represented as deified patrons of the music and literature. The jaguar represents a number of different gods, including the Night Sun, god of terrestrial fire and war, and the God of the Underworld God L. This is only a handful of the deified gods, as so many more represent gods and sacred beings. The animals themselves are deified; however often in Mayan iconography certain gods were portrayed with physical features of the animals that represent them, such as having a serpent face, wearing a jaguar skin, or having plumed feathers.

With the objects I have chosen for my gallery I will illustrate many of these essential aspects of the Natural World. You will see a World Tree, many animals, ritual offerings, Maya elites and deities, maize, and cacao. I will highlight the focal points of these objects to shed light upon their significance and meaning. Take a look at the objects, read and absorb the short description, and then investigate the object more deeply. Look for the meaning and explore your own ideas about these objects, too. 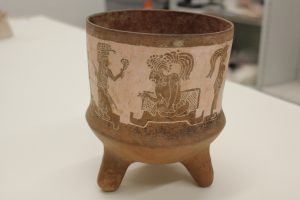 This tripod vessel is an example of a vessel used for ritual, trade, offering, or tributary acts. We know it is a bowl made for people of high status (for rituals, offerings, or even burials) and not for daily use because of its fine design with a belled bottom, tripod legs, and finely molded clay, and also the subject and detailed rendering of the scenes.

The drawings depict an offering or tribute ritual. There are two main scenes that seem similar, focusing on two figures, most likely elites or deities, sitting cross-legged on a throne, but have a key difference. Both men on the throne wear large, decorative headdresses, one with armor-like jewelry and the other with large earrings, and are offered an object by another man wearing a headdress and decorative clothing. However, one figure rejects the offering with a downturned palm, and the other accepts with an upturned palm. Another, smaller figure holds a vessel containing a skull, possibly from a human sacrificial ritual. We should also note that there are no women in this scene, as women were never present during rituals such as these.

Offerings such as the ones depicted on this vessel are one of the main ways that the natural world is connected to the underworld and upperworld. Mortals must give offerings to the gods, or pay tribute to the elites to keep the universe and the cosmos in balance. These rituals ingrained in the daily lives of the ancient Maya and were an integral component of the political and social structures of Mayan civilizations.

Gift of Allan and Rochelle Kesselman 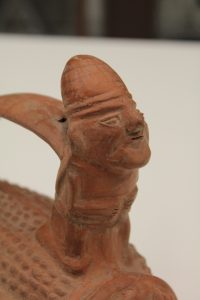 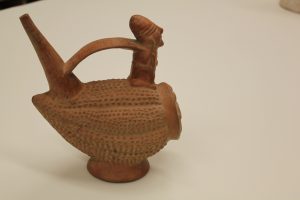 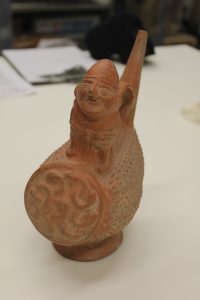 The body of this oddly shaped vessel is in the shape of a cacao pod, cut open on one end revealing the sweet pulp inside. The man perched on top has the head of an ear of corn, and could be a representation the Mayan Maize God. This vessel combines the meanings and iconography of the two most important plants and foods in Mayan culture, highlighting their importance as both separate entities and as a union. Cacao is the sacred food, and maize the staple food of the Maya. The gods created man from maize, and therefore this crop is seen as essential to life. The human life cycle mirror’s the life cycle of the maize crop as well as the death and resurrection of the Maize God, who presides over the cultivation and prosperity of crops. This god was so sacred that Maya kings portrayed themselves in drawings as maize gods, with elongated cranium in the shape of an ear of corn. Cacao is also metaphorically seen as representing the blood and soul of humans, being a sacred and supernatural substance. These two substances are often seen seen together in Popol Vuh, both playing an essential role in the universe. In fact, some Mayan ritual drinks were made of a combination of maize and cacao, and are still consumed during festivities to this day.

Gift of Mr. John B. Fulling 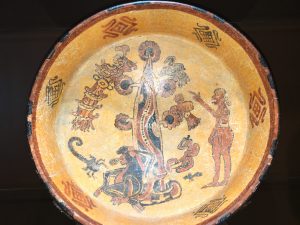 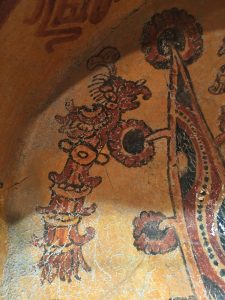 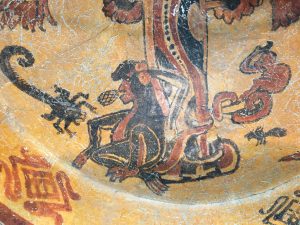 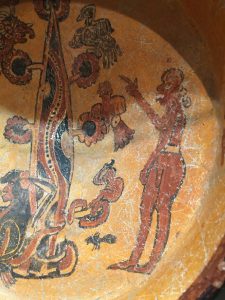 The iconography of this dish firmly represents the cacao tree as the World Tree, the center of the universe and the Mayan cosmos. The tree bears a fruit that we can infer are pods of cacao, the sacred food of the Maya. The figures depicted are a human male, a monkey, a bat, two Quetzal birds, a scorpion, and a flying deity. These are creatures in the natural world, but are anthromorphs for deities or sacred beliefs from all three of the realms. Depicting them together with a World Tree represents the connection between the realms with the Tree at the focal point. The human represents the natural world, the scorpion and bat represent the underworld, and the monkey and Quetzal birds represent the Upperworld. We also see a deity, the plumed flying serpent, which represents the supernatural and controlling powers of the gods. The supernatural qualities and deities manifested in the animals illustrate the Mayan belief that nature is all-powerful and sacred, and is something to which humans must surrender.

This dish was most likely used for ritual purposes, as it is highly decorated and not of functional food or drink consumption shape. It is possible it could have been used to serve ritual foods, or even hold cacao beans, as it depicts the World Tree as a cacao tree.

See Index for more information on the deities these animals represent

The figures representing the underworld are the scorpion and the bat. Bats often resided in and flew out of the caves in the cenotes, where many rituals and offerings took place, and were seen as creatures of the underworld. The scorpion is a symbol of the underworld, Xibalba, and is prevalent in one of the levels of the underworld according to the Popol Vuh. However, the deity this animal represents, the scorpion god or Ek Chuaj (God M) was a god of warriors and merchants and a patron of cacao. Monkeys are seen as patron deities of the arts. Depicted as scribes and half brothers to the Hero Twins in the Popol Vuh, monkeys were also sometimes thought of as contributors to the creation of mankind. They also were important in the natural world and revered for eating and spreading cacao seeds across the Maya Forest Garden. The birds are two very important figures. They are most likely quetzal birds, which often times represented the creator deity and sky deity Itzamna who lived in the sky and are a symbol of nobility and greatness. This deity frequently appears at the top of a world tree in Mayan iconography. These birds also ate and spread cacao seeds, an important player in the ecosystem. Lastly, the flying figure on the left is a feathered serpent deity, Gukumatz, who, in Popol Vuh was one of the gods who created the world. He carried the syn across the sky and down into the underworld, and was a mediator between the powers of the Maya cosmos. He is particularly associated with water, clouds, sky, and wind.