In Ancient Mayan culture, the Upperworld carried much importance as a part of the three-realm universe. It was here where the sacred deities lived and ruled over the Mayan people. Human beings residing in the Natural World desired to interact appropriately with the gods in order to ensure better conditions for themselves and their civilizations. Thus, there was a large focus on the interdependency between these two realms, one in which the gods depended on the Natural World to be able to rule over something while human beings relied upon the Upperworld figures to plead for acceptance and respect.

In many pieces of art that reflect upon Mesoamerica, gods are depicted as prominent figures who dominate a large portion of the space. Interestingly enough, these holy deities represent many different elements of the Mayan culture, indicating that this civilization firmly believed in the role of the supernatural in their natural world. All deities are represented as men, however, giving insight to the gendered role of men as the more dominant character while women took on a more domestic role in this culture.

The gods from the Upperworld were constantly rewarded with ritualistic gifts as a way for the Maya to show their appreciation. Habitual practices of bloodletting and sacrificial offerings illustrate the common behavior of this civilization to pay respects to these deities. Both of these traditions highlight the commitment of the Natural World upon which to be viewed favorably by the Upperworld.

These religious offerings would include both human and symbolic blood as a testament to their belief in these deities. Human sacrifice sent the gods honorable people who offered their lives to please the supernatural. In addition, the Maya would offer their best cacao to praise each deity. Cacao as a resource embodied qualities of all three realms and thus was considered holy. This coincides with the use of the Cacao Tree as the World Tree in many Mayan civilizations, as there exists potency in the symbolism to describe all three realms with this tangible, animate object that lives in the Natural World to connect it to the Upperworld. Seen as symbolic blood, cacao through this practice expressed the civilization’s desire to remain in good graces with the figures of the Upperworld.

These common themes have been depicted in Mayan art thousands of years ago when exploring the Upperworld. As it will be indicated from the gallery viewing today, their art pieces have helped the current generation to understand more about this culture and their belief systems.

Each stylistic choice made by the artist was intentional in its effort, working hard to depict the authentic religious and cultural lives of Mayan civilization.

Re-creations of important gods like Itzanmá, the Creator, have led historians to engage more intimately with this type of work. The scripture of glyphs and the incorporation of select colors act as purposeful details to further develop each artistic work. While the inclusion of animals in Mayan art work has the capability to represent all three realms, especially due to these creature’s abilities to live on any portion of the Cacao Tree, the Upperworld is normally represented by specific animals like the bird or monkey.

Researchers are focusing on the consistent presence of certain figures and attempting to connect this phenomenon to the sacredness of the objects for which they represent. Apparent from the interdependence relating to the three realms, it will be important to acknowledge these connections as the gallery moves on to discuss the importance of the Natural World in the Mayan culture. The Upperworld truly could not exist without a human realm, and this idea will be explored in the next section.

While the exact preservation methods to ensure that these pieces remain intact were not explicitly described in the archival files, it is very apparent that the Nasher Museum takes quality care of these objects through the required experience necessary to touch and reorient these ancient Mayan works. Now, allow the following exhibit to bring out questions of curiosity, as even today, many of the details cannot be concretely explained or interpreted. 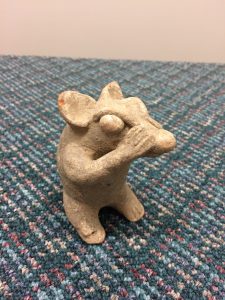 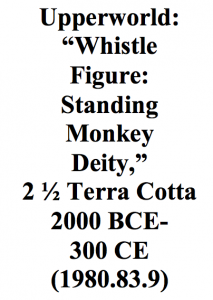 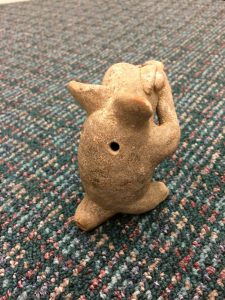 This imagery shares insight into the importance of the Upperworld in the ancient Mayan culture. Known as “monkey ocarina,” the depicted figure represents the holiness associated with the mono, or monkey, within Mesoamerica. The monkey represents a supernatural animal because of its near-human form. If the gods had used maize instead of wood to construct the Natural World, this animal would have been a human being. Thus, the monkey carries significance as a sacred being in relation to the other realms of the Mayan world.

The holes found around the monkey figurine imitate the whistle as a musical instrument. This incorporation of sound as part of the mono points to the role of music to converse with the gods of the Upperworld. In a culture dependent on the belief of deities, the Mayan people often perceived monkeys to represent the god of the arts. This intentional choice to position a monkey to act dually as a whistle encapsulates the Mayan culture and its ability to actively express its connection to the Upperworld. This could add significance to the Mayan tradition of sacrifice, using a holy symbol to make noise for the gods as an offering to be accepted by the sacred. 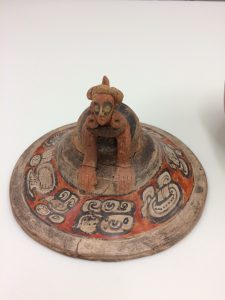 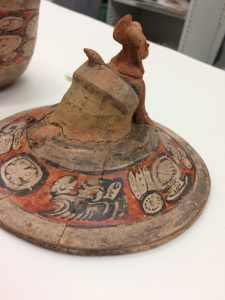 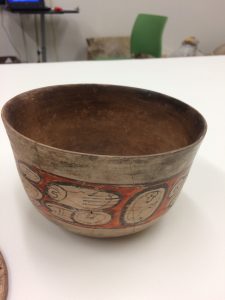 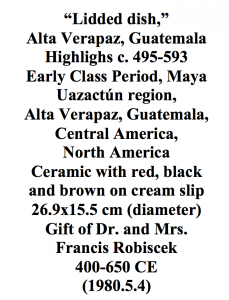 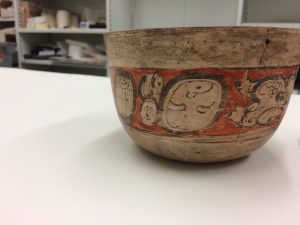 This commonly shaped vessel and its inclusion of a physical, tangible representation of a deity as the lid handle reveals the importance of each holy god as a part of the Mayan community. This careful construction of the detailed illustration depicting a god has been understood to represent God N, the cosmology god who connects the Natural World and Upperworld. This could depict the Natural World’s necessity of a higher being, like God N from the Upperworld, to support its existence.

Indicative due to its shape and size, this vessel was most likely purposed to hold cacao during an offering to the deities of the Upperworld. Because of its ornate and precise imagery, this artistry would have been worthy enough to act as an intermediate connection between the natural and supernatural. Cacao carried much significance within the Maya culture, seen as the sacred plant that uniquely existed between the three realms of the universe. The utility of this vessel reveals the deeper meaning behind sacrificial offerings and the role cacao played to honor the gods. 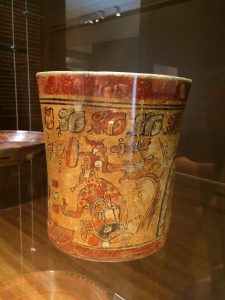 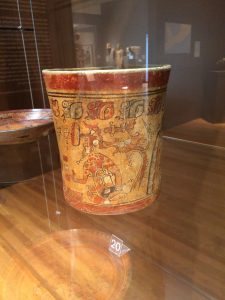 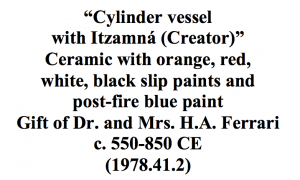 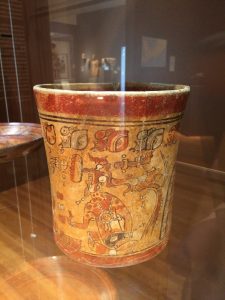 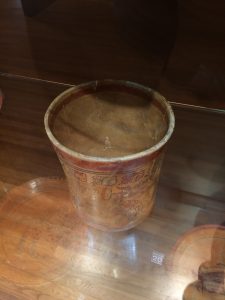 Itzamná, the Mayan God known as the Creator, takes center stage in this vessel attempting to tell a story. Immediately upon glancing at the imagery, one can see the dominant figure of the Creator. This could demonstrate the artist’s intention to publicize the role of the deities in the everyday lives of Mayans and their culture.

Investigating this piece more closely, it seems to have many different moving elements included in its production. The glyphs, signifying cauac, or heavy storms with rain, thunder, and lightning, emphasize Itazmná’s duty as the Creator. The Upperworld controls all things in the Natural World, including the weather and how it affects human beings. The symmetry of each respective glyph could indicate the balance between the connection of humans and deities. The behavior and honoring of the Mayan superpowers could impact the blessings or curses bestowed on them by the gods. Through this piece, the audience learns that these realms relate interdependently all throughout Mayan culture.