An experiment in reading together in Spring 2022: Dream of the Red Chamber 紅樓夢

Join us Saturday 5/28 11am ET for #ReadingTheStone Chat 8 for discussion of HLM’s “Grand Prospect Garden” (大觀園 daguanyuan), translating proper names, and any questions/comments through Ch18.

Here is a wonderful introduction by Anne Sytske Keijser (one of the Dutch translators of HLM), to editions of Dream of the Red Chamber in the holdings of Leiden University Library Special Collections, including this detailed map of Grand Prospect Garden (大觀園 daguanyuan), a 1908 stone lithographic print by 陸子常 Lu Zichang and published by 求不負齋 Qiubufu Zhai.

This 大觀園精細全圖 “Detailed and Full Map of the Prospect Garden” is a depiction of the garden…drawn by 陸子常 Lu Zichang, about whom not much is known. His map is not a mere schematic rendering of the garden with just the buildings, but a carefully drawn semi-realistic impression of what the garden might have looked like. The garden is presented as a microcosmos that is not connected to the Rong mansion that it was part of. The self-contained world of the garden as imagined by Lu Zichang is surrounded by nature: we can see hills and trees in the distance, there is nothing to indicate that the garden was part of a mansion in urban Beijing. The garden is empty of people so that readers are free to project any scene from the novel that is situated in the garden onto the map.

#ReadingTheStone’s 7th Saturday chat was supposed to be a continuation of our discussion of the education of Baoyu, the young scion of the Jia family – but Waiyee, Ann, and Eileen were  diverted by discussion and questions about the ‘creation’ of the extraordinary Jia daughter-in-law, Wang Xifeng. From her keen knowledge of maths and household economy, to her minimal literacy (certainly in comparison to the other high-status young women in HLM), to her casual cruelty – Xifeng properly stole the show this week.

Thank you all for thoughtful #ReadingTheStone comments, questions, bibliographic suggestions, and ofc, gifs! 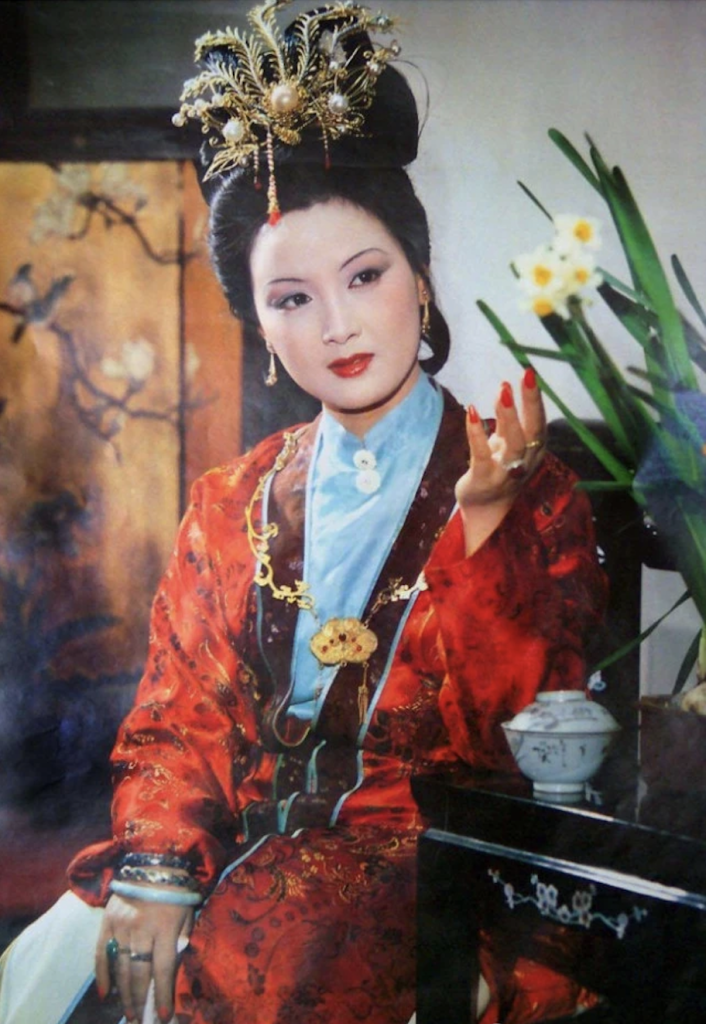 #ReadingTheStone Saturday Chat 6: On Mirrors, and The Misguided Reader

#ReadingTheStone Saturday live chats are back after a week’s hiatus, and in this episode Waiyee and Eileen discuss the history of interlinear & eyebrow commentary in Chinese fiction and possible resonances with 21st century online fanfiction community practices; crossover fic potential with Pride and Prejudice; fiction as pedagogy – what is a bad reading? who is a misguided reader?; metafictional aspects of the text; sexual transgression in the private schoolrooms and in the family mansion; and whether the hapless Jia Rui and his fatal obsession with the mirror is the ultimate stand-in for the hopelessly addicted HLM reader.

Saturday Chat 6: On Mirrors, and The Misguided Reader

And the 2010 version of Jia Rui, unable to log off social media. pic.twitter.com/gWid9bdETK

Our fifth Saturday chat (that occured live on Twitter Spaces on 4-30-22) continues the past week’s conversation on Baoyu’s sexual initiation – both in dreamland at the end of Chapter 5, and in the ‘real world’ at the beginning of the following chapter. Waiyee, Ann, and Eileen chat about one of the best known characters in HLM, that of Granny Liu – and of narrative spaces as seen by outsiders and interlopers; and reader/writerly identifications and perspectival shifts in narrations.

And after taking a week’s hiatus, we’ll be back this Saturday May 14 to talk about Wang Xifeng! 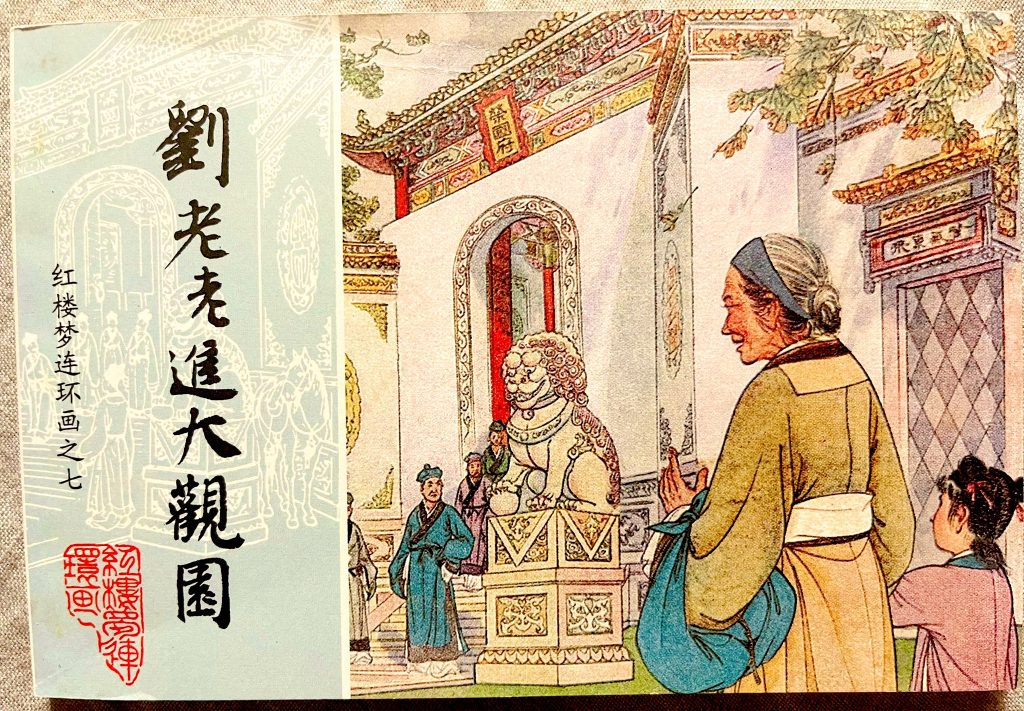 Eileen, Waiyee, and Ann dive into Chapter 5 of Hongloumeng – and respond to #ReadingTheStone questions and discussions about the role of dreams in Chinese literature, the choice of translating xian as immortal or fairy, the author’s invention of a supernatural pantheon and the character of The Fairy Disenchantment (Hawkes’ translation of 警幻仙子, the necessary blindness of knowledge (Baoyu’s chi 痴) and the novelistic form, and perhaps musical structure as a way of thinking about Chapter 5’s revelations and role in the overarching narrative structure of Hongloumeng.

#ReadingTheStone Episode 4: On Dreams and Chapter 5

Read this week’s ongoing thread #ReadingTheStone for a rich extended discussion of all the above topics!

Loving this discussion of dreams in the context of Chinese literature. Eileen's mention of Lu Xun and the "iron house" reminded me of the parable of the burning house -- where an untruth serves as a form of skillful means, just as Baoyu's dream was *supposed* to. #ReadingTheStone

#ReadingTheStone on Chapter 5 – “a doozy in any language”

As some are still catching up, and as we concur with @hushuo that “Chapter 5 is a doozy in any language” – we’ve decided to have our upcoming chat simply focus on parsing Chapter 5, and to postpone a discussion of Chapter 6 and Granny Liu in the Jia residence for the following week.

Please tweet your comments and questions at us for Saturday! #ReadingTheStone 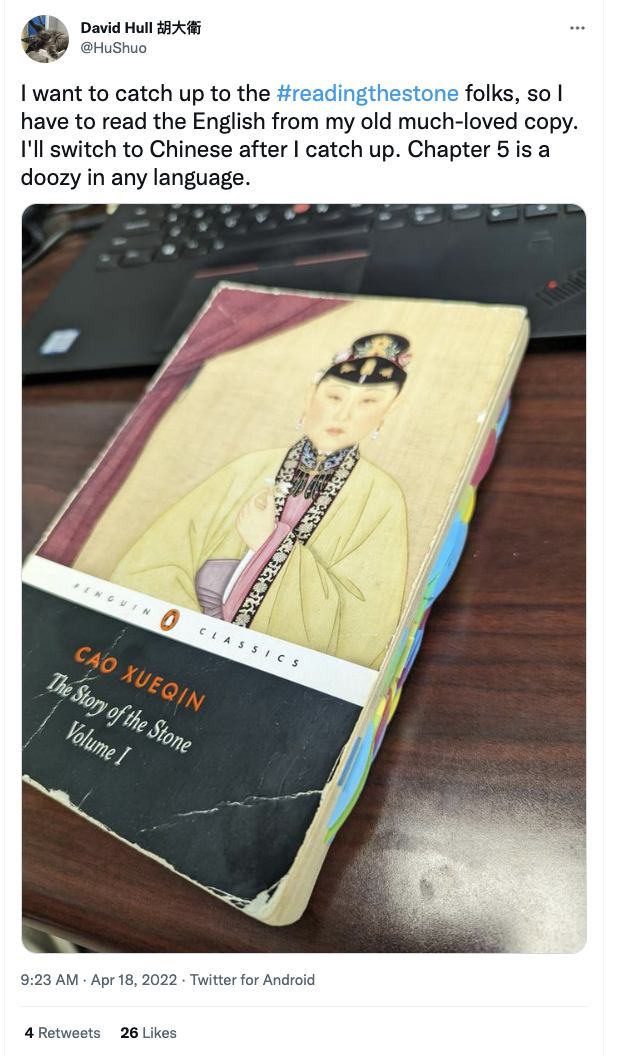 Thank you to all who listened in and participated in the lively #ReadingTheStone discussion on 4/16, now our third Saturday chat in a row!

Among other topics, we touched upon issues of narrative structure (voyages and battles, and perhaps habitation too); the complexity of HLM characters that alternate between wisdom and venality (Jia Yucun); doubles and echoes of characters throughout the fiction (doting fathers, orphaned daughters); wealthy men dabbling in Taoism as an escape from societal expectations; Daiyu as an enduringly compelling character; and the recurrent theme of trans-ness – most notably Baoyu and transgender identity, but the many instances of discordance between bodies and selves, human and non-human forms, given names and chosen names, et al in the novel, which we hope to return to at a future date.

Alas, due to my error, it was not recorded. Could I blame my currently enfeebled COVID state of brain fog? (I am on the mend, so this is just a blatant Daiyu-esque protestation of frailty) But I rallied Profs. Wai-yee Li and Ann Waltner for a follow-up discussion yesterday, so that we have something on record. Hope you enjoy.

Our second chat was less of a reprise than a continuation of discussion of Daiyu, Baoyu, and Baochai as characters, so please do add to the Twitter #ReadingTheStone thread or do comment below if you have further thoughts to share! Or if you have any questions or comments on Chapters 1-4 that have come up that you’d like to explore with the book group.

For this coming week, we’d like to delve into Chapters 5 and 6, as they are so rich (and a bit mysterious); but for the week after we will be leaping forward into Chapter 12. So if you are reading steadily please feel free to keep on going beyond Chapters 5 and 6 this week, as we’ll be picking up speed in weeks ahead.

We are inviting you to join in a public reading endeavor, in this spring of 2022.

Using the Twitter hashtag #ReadingTheStone, the account @ReadingTheStone, and a weekly (for now!) live chat with featured scholars and translators and experts in all manners of Red arcana – we hope to make the most of the public social commons as our collective reading space for reading and dreaming and discussing Dream of Red Chamber 紅樓夢, the 18th century fiction by Cao Xueqin 曹雪芹, the best known and also arguably, the best beloved work of literature in Chinese.

In my own teaching, in addition to weekly forum posts and response papers, my students often use social media as another commons for discussion – a space to be more playful, to engage with readers coming at the text from different backgrounds, languages, historical and cultural knowledge. No story is told alone – and it is always fascinating to witness the communities that coalesce around canonical texts.

#ReadingTheStone will be administratively supported by Duke’s Asian and Pacific Studies Institute (APSI) as well as Duke Story Lab. Down the road, we might wish to publish the book club proceedings in some form – though that would only be with the permissions of all of you involved.

Sharing a bit of an origin story for #ReadingTheStone; though if you are more auditorily inclined, you could also hear Wai-yee and me talk about it in our launch chat here.

Over the years, Duke Story Lab has had many experiments with public-facing humanities events. One of the Lab’s chief missions has always been to breach the artificial boundary between the reading, writing, and storytelling that happens in the classroom, and that of the world outside. In spring of 2020, just as we shut down our physical lab space and were refashioning our regular Durham and Duke community events to virtual ones, I stumbled into a virtual book club on Twitter, reading War and Peace alongside strangers around the world. To be honest, it kept me afloat those early months.

Spearheaded by the writer Professor Yiyun Li of Princeton and the literary journal and publishing house A Public Space, #TolstoyTogether was a rather spontaneous gesture in the early days of the pandemic that grew into thousands of enthusiastic readers sharing their thoughts along the way, a great moment of community that was sustained over 3 months and that was eventually collected into a book that listed many of us as contributors.

Late last fall of 2021, two dear friends in rather separate realms of my life, both expressed instant enthusiasm for participating in a project on reading Dream of The Red Chamber together when I mentioned that I had tossed out this idea to Yiyun Li as to what I would like to read collectively if I were leading a public book club. What was inspiring was that my two friends were enthusiastic for entirely different reasons: Shen Lu, a brilliant journalist (and wordsmith and Hangzhou cuisine chef, among other talents!), confessed that though Hongloumeng felt like something that she should have already read but in fact never had; and Wai-yee Li, a world-reknowned expert in Ming-Qing dynasty literature who has researched and taught and written on Hongloumeng for decades, but who wondered if the fervent love and interest that so many of us have for the book in Chinese (or as scholars of Chinese literature in the academy), could be shared with a larger literary reading public, and that Hongloumeng could in fact be embraced as a work of world literature, much like the works of Tolstoy or Mann or Flaubert, without extensive scholarly apparatuses or hand-wringing over what might be lost in translation.

I am a firm believer that we fall in love with books and characters and stories however we first come to them. Whether it be in the Red Inkstone edition with its copious and opinionated annotations, or the 1950s mini-comic books or many film, TV, and regional opera adaptations or via translations into multiple languages (abridged and unabridged) – we each have an origin story of how we fell into Dream of the Red Chamber.

Thank you for your interest and engagement with this project, especially given the fraught global historical moment and more urgent life-and-death matters all around us.  But I do share in the conviction that, as Toni Morrison once so cogently put it, “This is the precisely the time when artists go to work. There is no time for despair, no place for self-pity, no need for silence, no room for fear. We speak, we write, we do language.”

If I didn’t truly believe that, I wouldn’t do what I do.

On behalf of the #ReadingTheStone community – welcome!

April 2022: Join the conversation on TwitterSpaces

The next #TwitterSpaces chat takes place Saturday 4/9 11amET with a dive into the text Chapter One of #紅樓夢. 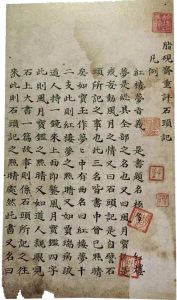 A page from the “Jiaxu manuscript”, 1754, held in the Shanghai Museum

An experiment in reading "Story of The Stone" aka "Dream Of the Red Chamber" #紅樓夢 together this spring. All languages and editions welcome. @chowleen + friends

Thanks for joining us today for our Saturday chat! We've really enjoyed seeing everyone's HLM encounters on the road: digital versions, in libraries, in museums, inside a good hammock.
Could we ask folks to share photos or descriptions of where we're all #readingthestone? https://twitter.com/chowleen/status/1555133862090403841

DALL-E 2 prompt: "The original conclusion of Cao Xueqin's novel The Story of the Stone" (apparently it was by Xu Bing) #ReadingTheStone 4

@readingthestone Ah, so it recognizes Irish names too