Facing heightened migration flows from Central America and seeking to distinguish itself from its predecessor, the López Obrador administration soon after taking office adopted a new migration policy intended to promote safe, legal, and orderly migration while prioritizing human-right protections. Even as the administration has increased enforcement operations across Mexico, partially in response to U.S. pressure, its new approach has centered on leveraging and expanding existing policy mechanisms to register unauthorized migrants.[i] Despite the initial creativity of this approach, however, as Mexico’s policy response evolves, the new administration faces significant barriers to fulfill its vision of a policy that is centered on humanitarian concerns, not enforcement ones.

Registering migrants in transit allows authorities to screen and manage flows—all aspects rightfully in Mexico’s interest. In return, migrants are given an opportunity to legally stay in the country and, in some cases, work.

By issuing over 11,000 humanitarian visas at the Mexico-Guatemala border in January, for example, Mexican authorities were able to manage large caravans of migrants, easing immediate pressure on its already struggling asylum system.[ii],[iii] The decision to register and provide basic services to migrants seeking entry into Mexico were in sharp contrast with the border controls that the prior administration had implemented just months earlier. Yet, unable to keep pace with the growing number of migrants, the López Obrador administration stopped issuing these visas at the border a few weeks thereafter, requiring migrants apply from their countries of origin.[iv] 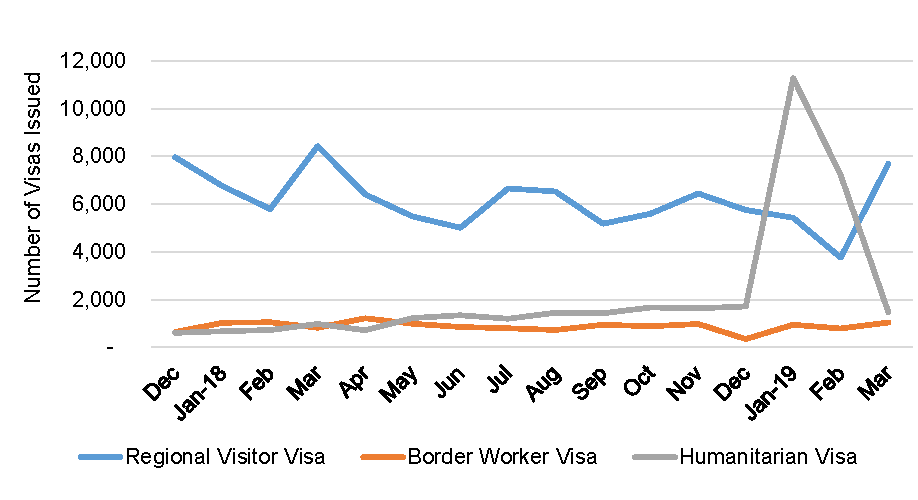 In addition to asylum and humanitarian visas, Mexico’s migration law provides migrants other mechanisms to obtain temporary legal status. Regional visitor visas allow migrants restricted travel in the southern states of Campeche, Chiapas, Quintana Roo, and Tabasco, but prohibit employment. Originally only available for Guatemalan and Belizean citizens, the Interior Ministry (SEGOB) in April expanded eligibility to Salvadorans and Hondurans. With the expansion, the mechanism is intended to document migrants deemed ineligible for humanitarian visas.[v]

Similar to the regional visitor visa, Mexico also provides border worker visas to Guatemalan and Belizean citizens who seek temporary employment in southern Mexico. Employment authorization is valid for one year, renewable, and restricted to the same states as the regional visitor visa.[vi] Between fiscal years (FY) 2016-2018, Mexican authorities issued approximately 40,000 border worker visas, with most beneficiaries coming from Guatemala and working in low-skilled agricultural employment.[vii] To reduce illegal migration flows and contribute to economic development in southern Mexico, the López Obrador administration has suggested widening eligibility for the border worker visa or establishing a new visa to include Salvadorans and Hondurans.

But unlike the early response of providing humanitarian visas, which migrants commonly used to transit to the U.S.-Mexico border, Mexico faces significant challenges implementing these policies because they are perceived to contain migrants in the country.[viii] Migrants’ prospects in the United States often outweigh any potential advantages of a legal stay in Mexico (e.g., language and cultural ties, lawful employment without the threat of deportation, and regional mobility). As a result, they may be less likely to register for legal mechanisms for long-term stay, instead opting for unauthorized transit that exposes them to dangerous conditions and abuse by human smugglers.

At the same time, these mechanisms have tested Mexico’s capability and willingness to be a country of immigration and integration, exposing the gaps inherent in transitioning from the country’s long role as one of emigration and, more recently, transit. Substantial resource and technical constraints inhibit the ability of the National Institute of Migration (INM) and the Commission for Refugee Assistance (COMAR) to process and resolve migration documents and asylum applications, leading to long delays and reduced incentives for migrants to apply. Moreover, as images of caravans and migrants queuing in border cities flash on Mexicans’ TV screens, public opinion towards migrants is becoming less favorable, with more Mexicans calling for deportation and asylum limits than in the recent past.

The administration’s policies map a way forward for Mexico, particularly as it seeks better cooperation with the United States, but require addressing existing limitations. To incentivize migrant registration, regional restrictions could be lifted and attuned to labor demands across Mexico. Broader legislative efforts to design a detailed and flexible temporary worker program could be promising over the long term. These efforts could complement the administration’s commitment to address the root cause of illegal migration by investing in southern Mexico and the Northern Triangle countries. But without additional investment to strengthen the migration institutions responsible for implementing these policies, for instance with the assistance of international organizations, the impact of this new migration policy is likely to be minimal.

The López Obrador administration has made clear that its policy is not free transit and requires migration to be orderly to safeguard migrants’ human rights. And while the conditions on the ground and migrants’ deep ties to the United States make it unrealistic for most to stay in Mexico in the short term, designing flexible policy mechanisms that transition Mexico to becoming more of an immigrant destination would be a worthwhile investment for Mexico and the region.