Foreign threats are reliable vote getters, the more exotic the better, a calculation instinctively understood by demagogues the world over. Such is the strategy of the Trump administration’s ongoing attempts to link crime to immigration,[1][2]  two issues that numerous studies have shown to have no connection at all.[3] Migration, including unauthorized migration, to the U.S. has been on a steady general decline since the Great Recession; Department of Homeland Security figures show that unauthorized border crossings are the lowest they have been in a decade. As for crime that President Trump blames on immigrants, violent crime rates have been dropping sharply since the 1990s.

A focal point of this strategy has been MS-13, a criminal gang (better described as a loose affiliation of gang franchises) born in the U.S., but which has taken on deeper roots in Central America, and presents a convenient bogeyman for the Trump administration’s efforts to paint immigrants as violent criminals.

My research on the gang has found its US presence to be greatly exaggerated by administration rhetoric. President Trump regularly invokes MS-13 in speeches, including in his State of the Union address, describing it as a “savage gang” of “monsters.” Former Attorney Jeff Sessions designated the gang one of the top five transnational criminal threats to the U.S., on par with the Sinaloa drug cartel and Hezbollah. The specter invoked by Trump of an unchecked “flow of drugs, gangs like the violent MS-13, and criminals across our border” prompted the federal government shutdown over his proposed border wall.

In reality, as I’ve written in the Guardian and Washington Post, MS-13 is a relatively small player in the world of U.S. organized crime. FBI threat assessments have estimated its U.S. membership to be steady at 10,000 – far smaller than Bloods, Crips, Latin Kings, Aryan Brotherhood, or nearly any other gang with national name recognition; the prison gang Tango Blast has nearly twice that number in the state of Texas alone. Nor is the gang “streaming across our border.” Data from Customs and Border Protection show that of the 526,000 people to have crossed the southern border without authorization in fiscal 2017, only 228, or 0.04%, were suspected of MS-13 membership.[4]

Estimating gang criminal activity is difficult, and there are many ways to exaggerate it. The anti-immigration Center for Immigration Studies issued a 2018 report declaring an MS-13 “resurgence” based on arrest reports of 506 suspected MS-13 members since 2012.[5] The perception of a crime wave was inflated by counting nonviolent crimes such as immigration violations, particularly in the “sanctuary state” of California, and by counting cases by perpetrator as opposed to by crime. Many RICO cases pursued by the Department of Justice netted ten or more suspected gang members for a single criminal conspiracy.

My research on the gang’s activities in the U.S. takes a broader historical scope, going back to 1998, and looks specifically at violent crimes. A database I’ve created with the help of VCU undergraduates finds that murders peaked in 2017 with 41 nationwide linked to suspected MS-13 members (out of a total of 17,284 homicides in the U.S. that year). Yet 2017 was an outlier; most years the number was below 20 and often below 10, including in 2018, never accounting for more than a quarter of 1% of all homicides in the U.S. And in contrast to the administration’s attempts to paint immigrant-friendly California as a state scarred by gang violence, most of the violent activity took place in non-sanctuary states such as Georgia, North Carolina, Texas, and Virginia, as well as New York. 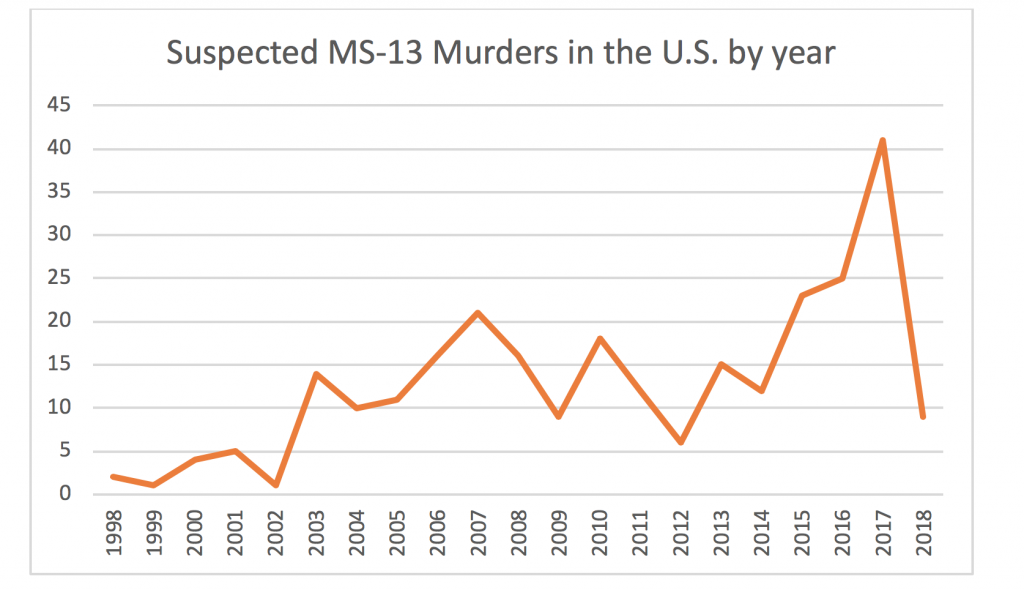 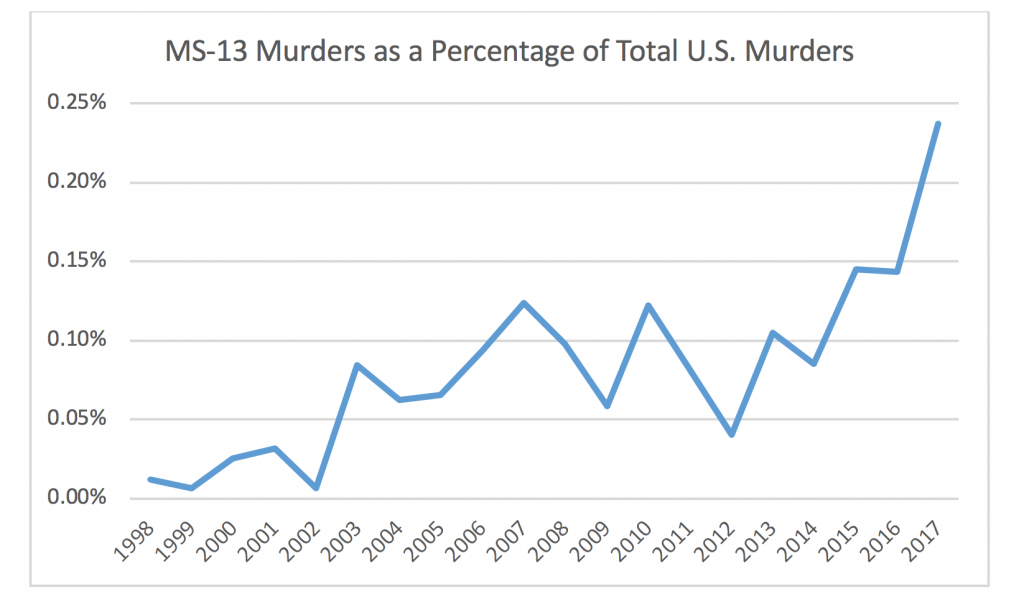 Compiled from US Department of Justice indictments and news reports

MS-13 is far from a foreign threat. Born in Los Angeles along with its longtime rival, Barrio 18, the two gangs presently behind the world’s highest homicide rates outside of war zones were brought to Central America’s Northern Triangle by U.S. deportation policy. While some gangs predated the arrival of MS-13 and Barrio 18 to El Salvador, Guatemala and Honduras, Central America did not have a gang crisis until the U.S. exported one to them.

Both MS-13 and Barrio 18, an older gang whose U.S. name – 18th Street – reflects its origins in L.A.’s Pico-Union neighborhood, came to accept migrants fleeing Central America’s civil wars beginning in the 1970s. Newer migrants settling into poorer neighborhoods were soon persecuted by established, largely Mexican-American gangs, and formed or joined gangs in self defense. They were originally far more benign entities than they became: MS was originally known as the Mara Salvatrucha Stoners, whose teenage members were then involved in petty criminal activity, being more concerned with getting high and listening to heavy metal; their devil horns hand signs to this day trace back to the band Judas Priest. Then, an anti-gang sweep by the LAPD ahead of the 1984 Summer Olympics landed many of them in jail, where they were inducted into the gang culture of California’s prison system, and became far more violent. This includes paying tribute to older, stronger gangs – the “13” was adopted as tribute to the Mexican Mafia.

Yet Barrio 18 and the newly branded MS-13 did not become a problem for Central American countries until the 1990s, when President Bill Clinton initiated the current wave of mass deportations which brought planeloads of deportees, and those L.A.-based gangs, to countries too poor to deal with the influx. Part of Clinton’s own mano dura approach to crime which included the 1994 Violent Crime Control and Law Enforcement Act, the policy of mass criminal deportations came into being with a pair of laws that facilitated the deportation of immigrants with criminal records – including legal residents – by making things such as drunk driving and petty theft deportable offenses.

The results was a fivefold increase in annual deportations to El Salvador, Honduras, and Guatemala between 1995 and 2013, from under 2,000 to over 100,000. Criminal deportations hit a high under the Obama administration, reflecting the popularity of the policy for Democrats and Republicans alike. Many of those deportees have weak ties to their “home” countries, having migrated at a young age. Some do not speak Spanish well, are poorly socialized into living in Central America, and all face the stigma of being deportees, which many in Central America assume means gang members.[6] This makes deportees largely unemployable (with some exceptions – the call center industry is one), and easy prey for gangs for forced recruitment.[7]

In response to this influx of deportees and growth of gangs, governments in Central America have responded with variations of zero tolerance policing – dubbed with increasingly hyperbolic names: “mano dura,” succeeded by “super mano dura” – which mask their ineffectualness. Gang leaders locked up now direct their gangs from overcrowded prisons which they control. Despite a brief truce between MS-13 and Barrio 18 in El Salvador brokered by the Catholic Church, the Salvadoran government has returned to a gloves-off approach which saw the creation of vigilante death squads which have killed entire families of accused gang members, with gangs targeting families of security forces in response.[8] Both gangs have fractured, and gang violence has evolved from inter-gang warfare to war between gangs and the state.

Deportees are particularly vulnerable within this climate. Under a Salvadoran law passed in 2017, Decree 717, deportees suspected of gang ties, or who simply visit or live in areas frequented by gang members, are monitored by police, often hassled and threatened. The Salvadoran government obtains criminal history and biometric information on deportees from the U.S. Department of Homeland Security’s Criminal History Information Sharing (CHIS) program which it uses to maintain their own database of suspected criminal deportees – information which, due to infiltration of police by both gangs and paramilitary forces, aids the targeting of deportees for violence by both.

The result of this cycle of violence, fueled by unceasing planeloads of deportees, has created a security crisis that hundreds of thousands of civilians are seeking to flee. As the gangs are far poorer and decentralized than the cartels with which they sometimes partner, their main sources of revenue are not large scale trafficking but extortion, and their victims are poor people in the neighborhoods in which they operate, particularly bus drivers, street vendors, and citizens with known sources of outside income including remittances from relatives in the U.S. These are the migrants who have been forming caravans and coming north, seeking asylum, victims of the gangs which the current administration has characterized as security threats and gang members themselves.

In addition to processing the asylum requests for which those migrants are entitled to apply, and which the administration has sought to block, a rational immigration policy would put an end to the mass criminal deportations which have caused such instability in those countries in the first place. But deporting away undesirables, even for wealthy countries far better resourced to deal with them than those on the receiving end, will likely remain an popular policy that will outlast the current administration.