The decision to migrate is complex and can be the result of competing and complementary individual, household, and community factors.[4–8] Given the uncertainty involved in choosing to migrate, research has connected the decision to migrate with riskier attitudes and behaviors.[9] In Latin America, studies have shown that having been the victim of a crime (or having a victim as a family member) is linked to higher desires to migrate.[10] Popular narratives posit that expansion of drug cartels have spurred this migration. In fact some research connects drug-related homicides to municipal population declines[11], but empirical studies that attempt to link crime and the expansion of drug cartels to increases in migration often fail to identify a causal link.[12] This study seeks to explain how crime and the presence of gangs in the Northern Triangle are associated with migration. Specifically, does being the victim of a crime or suffering from gang violence relate to a desire to migrate? Further, this study examines if this relationship is constant across the triangle and how it is spread across space.

Victimization, Gang Violence, and Intentions to Migrate – What the Data Tell Us

The data to answer these questions come from the Latin American Public Opinion Project, AmericasBarometer survey, which is a public opinion poll fielded throughout Latin America and the Caribbean, covering topics of security, crime, victimization, and confidence in public institutions among others.[13] This study looks at the three countries in the Northern Triangle, examining how a person’s desire to migrate is built through their lived experience and querying if they have been a victim of a crime and if they feel gangs affect their daily life.

Table 1 shows the weighted distribution of these responses by country. While responses vary by country, roughly 1 in 3 people across the Northern Triangle considered migrating in the near future. Moreover, roughly 1 in 4 people had been the personal victim of a crime and between 1 and 2 out of every 10 respondents indicated that gang presence in their neighborhood affected daily life. This study now turns to an analysis of the relationships between these measures.

Understandably, there are a number of factors that explain someone’s desire to migrate, and having been the victim of a crime is just one. To isolate the relationship between desire to migrate and our questions of interest, this investigation uses statistical techniques that account for variation explained by other measures. To that end, this study attempts to control for all the factors that are generally considered important in influencing the decision to migrate. For example, models include sociodemographic variables, such as sex, education, employment, household income, and characteristics of residence, such as urbanicity. To understand how personal connections to migrants can influence plans to migrate, models account for whether or not the person receives remittances, or money sent from relatives or friends living and working in a foreign country. Lastly, this analysis looks at dissatisfaction with one’s country, including responses from a series of economic and security questions.

When controlling for all other measures, the relationship between victimization and migration in the Northern Triangle is very much positive. That is to say, people in the sample who were the victim of a crime within the past year were nearly twice as likely to report that they intended to leave their country, compared to those who were not victims. Being the victim of a crime was one of the most impactful factors linked with intentions to migrate, but this effect was different across countries. In fact, victims in El Salvador were also nearly twice as likely to say they planned to emigrate, compared to those in the rest of the region.

Gang presence was also an important predictor of intentions to migrate, as respondents who lived in gang-affected neighborhoods were 1.4 times as likely to express a desire to leave their country compared to those in safer neighborhoods. Moreover, this “gang effect” was stronger in El Salvador and Honduras compared to Guatemala.

Do Place and Space Matter?

To better understand how where one lives influences the desire to migrate, this analysis also includes aggregate municipal measures on intentions to migrate and levels of victimization. Exploratory analyses, shown in figure 1, suggest that municipalities with high levels of violence and high desires to migrate tend to be clustered together.

Implications and Next Steps

The implications for the region are clear – as long as insecurity and gang presence affect peoples’ lives, emigration will continue to be a palatable option. RTI International is currently working in the region with Duke University to better understand the myriad of factors that push and pull people from the Northern Triangle, as well as how mass deportation can impact communities in these countries. Research and evidence-backed violence prevention programs are essential to understanding how violence and out-migration will continue to affect these countries. Future research will look at how community-level factors of violence, gang presence, and responses to these issues can influence personal migration decisions. 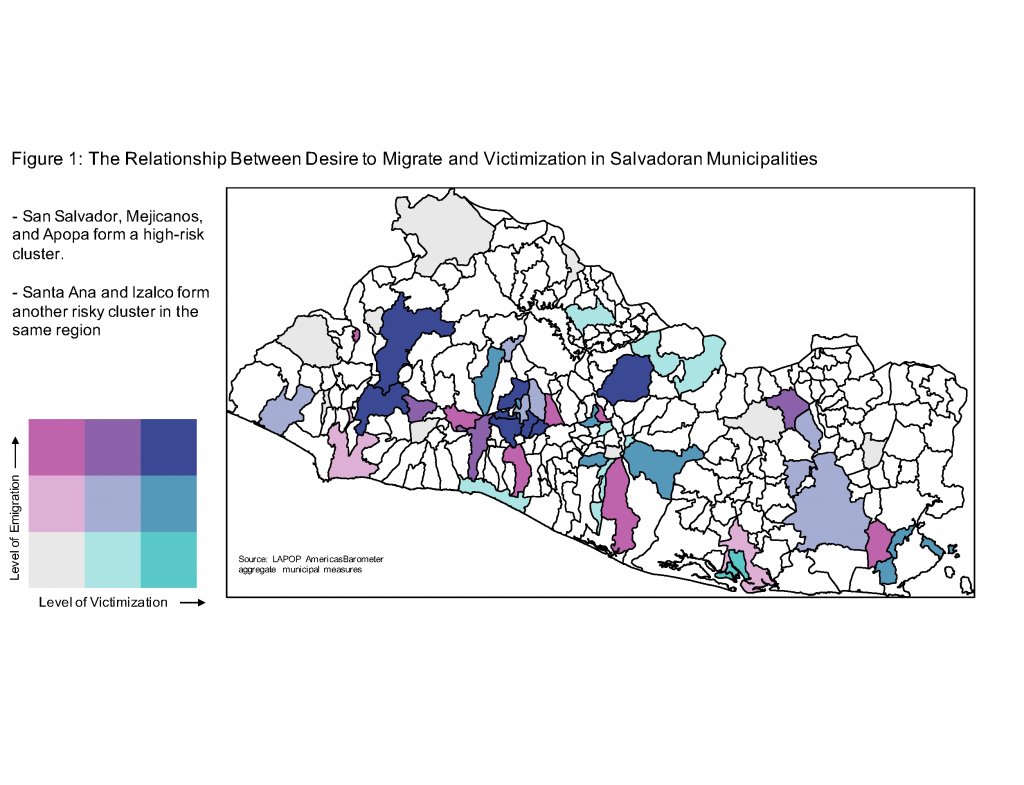 One thought on “Victimization, Gangs, and Intentions to Migrate in the Northern Triangle”