Moments from Whiplash (with a full recording!)

Thank you to all of you who joined us on Zoom on September 7th for “Whiplash: Anthropology in/of Disaster,” featuring Laurence Ralph and Yarimar Bonilla. Although the event took place on Labor Day, about sixty people joined us and stayed until the end. At the beginning, we asked our presenters to each say a few words about their work as anthropologists; they each spoke about fifteen minutes. 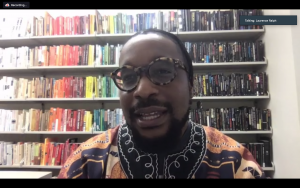 Laurence Ralph, introduced himself as doing an “anthropology of injury.” Injury connects his first book project, Renegade Dreams: Living Through Injury in Gangland Chicago, with his second project with black Chicagoans, tortured in prisons by police officers. For Ralph, injury serves as an enduring object of inquiry:

L.R. My works are complementary to my biography. I see myself as primarily doing an anthropology of injury. Not only the violent aspects of injury, but also the transformative potential and long-term effects of injury interests me. In my first project, I studied gunshot wounds. Injury is very specific, different from death or the violated self. And in injury, there is a possibility for recovery and repair. So, I am as interested in injury as in recovery and repair. 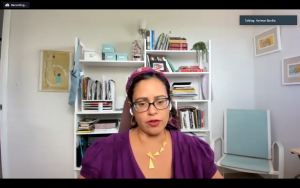 Yarimar Bonilla described herself as an anthropologist of “sovereignty otherwise.” Spanning her dissertation project on the French Caribbean to articles on #Ferguson to her most recent edited volume on Post-Maria Puerto Rico, Aftershocks of Disaster: Puerto Rico Before and After the Storm, non/sovereign places have long been at the center of her research. Across variously paced writings—from tweets to scholarly articles to books—she has engaged multiple publics through specific events and broader historical reflections. Such publics are formed across the bounds of what are conventionally distinguished as academic and non-academic publics. The introductory remarks were followed by an open dialogue with our two speakers.

Prior to this event, the six fellows from the Ethnography Workshop read, watched, and discussed Ralph’s and Bonilla’s  continuing engagement with multiple publics. The fellows focused on how this engagement had been done in the format of ethnography and other media, as well as how their distinctive perspectives shaped their intellectual and methodological questions. Their questions for our speakers initiated the Whiplash conversation. We then opened the floor for further questions, which led to many fruitful and provoking follow-up comments from both Ralph and Bonilla.

See what questions were asked from the Ethnography Workshop fellows

1) You both work on current crises (from the police torture case in Chicago to Hurricane Maria & its aftermath in Puerto Rico, to the election of Trump, corrosions of livelihood exacerbated by COVID, and the cascade of police-perpetuated killings against black women and men). You do so as public, activist anthropologists—but anthropology is also a discipline whose history you critique as complicit with some of the very structural inequities you uncover in your work. What, if anything, do you find useful in anthropology that you bring to the work that you do on the present moment as political/public intellectuals?

2) As public anthropologists, what is your positionality vis-à-vis the community? Laurence speaks of letter writing as a third way: a position that joins by “flattening” the distinction between insider and outsider. This also operates in the methodological strategies you both adopt: of fast writing and hashtag ethnography for Yarimar and of crafting letters that are both culled from and shared with focus groups of so-called ordinary Chicagoans for Laurence. But in advocating a hybrid positionality, beyond and between insider and outsider, is this at all akin to what Malinowski laid out so long ago? How does it differ and how do each of you involve the communities you are writing about in terms of the formation of research questions, information gathering, or co-ownership of data?

3) How might anthropology/ethnography be used to de-exceptionalize instances of heightened attention to ongoing histories and experiences of violence and oppression? How do we accomplish this without de-sensitizing white/privileged publics for whom the paradigm shift is most necessary?

4) What do you see, or would like to see, as anthropology’ future? There have been calls recently to “burn anthropology down” due to its overwrought racist, colonialist past, with which it has yet sufficiently extricated itself from. It would seem that, while critical of anthropology, neither of you totally adhere to burning it down. Rather, as put by Yarimar at the end of “The Coloniality of Disaster,” you say that “de- provincializing contemporary US articulations of power, decolonizing diversity, and unsettling the colonial logics of the academy might help us connect two crucial tasks: interrogating long-standing power formations and imagining new worlds.” Might you both tell us what new worlds you imagine yourselves for the future and how you see the interrogation of long-standing power formations as essential to this end.

So many good questions were asked! Although we didn’t have time to answer them all, we share the questions below. Our hope is to continue these conversations beyond the Whiplash event.

See questions from the floor:

Sarah Molinari: how has the pandemic changed how you might approach teaching a course on ethnographic methods? And also, how is it impacting your current projects?

Louise Meintjes: I’m interested in the limits of experimentalism for you as anthropologists. Could you talk about moments you’ve pulled back from risks you thought about taking in your research or modes of representation.

Joe Hiller: Thanks so much to you both! My question is about the role of anthropologists working on the aftermaths of violence, and whether you see promise/peril in justice system-type responses, whether through the International Criminal Court, or maybe a Truth Commission, or some other structure of reparations/redress? Are these useful for the “collective transformation of structures,” do you think? How does scholarship intersect with official justice/punishment systems in the US or internationally?

Diane Nelson: Thank you for all your work and for this – I am interested in the experience, Yarimar, of hiring a filmmaker and how Laurence, you made that amazing animation!

Ralph Litzinger: What about anthropology as a practice of surveillance, and the complex history of anthropology in working with counter-insurgency movements from Latin America to SE Asian to Afghanistan, and in the US as well, and elsewhere. How, with protests in the street, politic violence, from HK to Portland to Kenosha, surveillance is happening at every event. In this context, Big Tech, the architects of this new surveillance regime, have made new billions in the COVID moment, and they are donating hugely to BLM and other movements. How do you see anthropologists best intervening both in surveillance capitalism and in the corporate appropriation of BLM?

Christina Sornito-Carter: I am interested in the question of “temporality” as we talk about “disaster” and critique its invocation as singular events not continuous with structural violence and fetishizing “resilience”, especially as it disproportionately effect formerly colonized and POC communities all over the world. This is a particular interest for me in my work in the Philippine Islands, as I work with ghost stories, everyday superstitions, and healers that reveal both colonial histories and simultaneously anxieties about the future, especially in terms of climate change in Pacific countries.

Wei Gan: Thank you for being here today! I’m wondering about instances in which ethical/moral commitments are at odds between you and the folks you work with. What are the anthropologists’ political, ethical, and critical responsibilities when it comes to communities whose principles and practices might be conventionally classified as “bad’ or “wrong”?

Mary Ebeling: Laurence: Follow up on your discussion about do we need more research and connecting it to your ideas about abolition anthropology…if we are to change the institution, how do we resist the demands of the institution to always produce, to be a “productive subject” of academic capitalism?