Today is the last day of COP24. Party delegates have been running on little to no sleep to submit the Paris rulebook that will hopefully raise ambition. A draft of the text was released after 12 am this morning and with it came much protest. Twitter has been abuzz, students staged a walkout and protested at the COP, and the world’s least developed nations sent an open letter to Patricia Espinosa, the UNFCCC Executive Secretary, and António Guterres, the UN Secretary-General, voicing their disappointed that the CMP (Parties of the Paris Agreement) did not welcome the IPCC Special Report on 1.5 C. The tone of the overall COP is one of disappointment that the objectives of COP24 will not be achieved. With one more day to come to an agreement, everyone is pushing the parties to make the necessary comprises to vote on strong climate action. 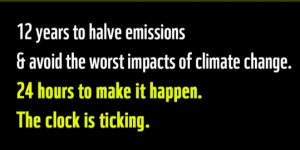 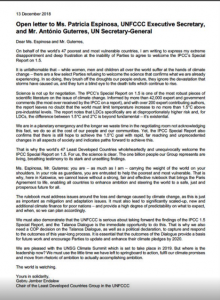 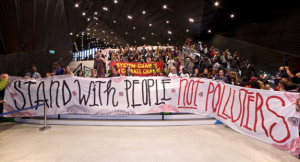 Today was a quiet day at the COP with many non-party actors fleeing town last night. The wrap up of the conference has been surprising to me—I had expected events to get more and more hyped throughout the week but attendance really seemed to dwindle. I have really enjoyed being here in Poland and getting to witness the proceedings of the COP. My favorite moments over the week were Al Gore’s lecture and the UN Secretary General’s statements to observers. Finally, I would like to thank Galen Hiltbrand and Tasfia Nayem for sharing their insights, organizing our lodgings, and a wonderful semester. 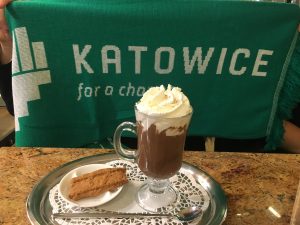 This past week, and presumably the preceding week, was a giant game of Mario Cart.  People rushed through the halls of the conference facilities, working to dodge the many thousands of people and find the fastest path from one place to another.

However, as Wednesday melted into Thursday, and Thursday faded into Friday, there were notably fewer people littering the conference facilities.  The likely culprit: fatigue.  By the end of Week 2, members of the delegations and civil society representatives alike were visibly exhausted.  Folks were fueling late nights with liters of caffeine.  Negotiators were locked in rooms until 2 a.m., 3 a.m., even 5 a.m., only to return early the next day and continue working to build consensus.  Here in Dąbrowa Górnicza, the Duke team is staying in the same place as the Angolan delegation.  Our Angolan bunkmate, António Armando, confirmed that he is quite ready for a much-deserved good night’s sleep.

However, exhaustion is also a negotiating tactic.  Many of the most crucial pieces of the larger climate negotiations puzzle are delayed until the final days and hours of the COP in the hopes that the sheer lack of time will ensure less opposition.  Likewise, negotiators continue to obstinately stand being their initiatives in a game of sleep-deprived chicken, each party waiting for the other negotiators to subordinate their stance to their desire for sleep.

As the COP approaches it’s close, I am feeling a whirlwind of emotions. Some hard goodbyes and some unmet expectations from the political body, but most importantly the intent to make most of this wonderful opportunity of being able to be physically present at the 24th Conference of the Parties. My favorite part about the whole week was to be able to hear honorable Secretary General of the United Nations address the observer parties and engage in dialogue. With prolonged negotiations and concern about the level of ambition coming out of the conference, the political will seems to be dying down after the Paris agreement. However, it is refreshing to see the Secretary General pushing for concrete actions, higher ambition and urgency. Along with him I too am optimistic given the rise in civic engagement, particularly by the private sector and the youth. 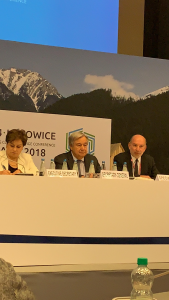 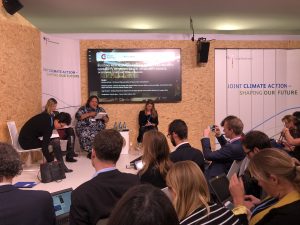 Today I attended one of my favorite events. It was about the intersection of climate and national security at the German Pavilion. I learned about how the United Nations Security Council (UNSC) needs better in-house experts on the issue, and how climate change should better be built into peacebuilding operations. When listening to the passionate Permanent UN Representative from Nauru—a small island country of 11,000 people in the Pacific Ocean—it was made very real how detrimental to global security climate change can be. Their entire sovereign nation may need to move to another sovereign nation. She said, “We won’t have a country to go to. This isn’t a sad story, it’s a reality.”

Today wrapped up my experience and I couldn’t possibly be more grateful for this opportunity.  Thank you, Duke for providing me with this fantastic week, and I hope to be at COPs in the future.

Today, December 14, is the last day of the COP24. Most of events and sessions were wrapped up today, but negotiations of parties are still going on. I have been waiting for the 8th plenary meeting of the COP, which is the last event at 7pm, but the time was changed to 10pm and again to 4am on December 15. As we know, it has been a long journey not only for 2 weeks in Katowice, but also for the last 26 years since 1992 or shortly since Paris Agreement in 2015. The issues, usually discussed in the UN, are complicated due to mixed interests and tangled relationship between stakeholders. I think climate change is the most intricate issue because of the broad scope of problems and different priorities from each country. Today, we have expected to hear some progressive results, but it did not happen yet. 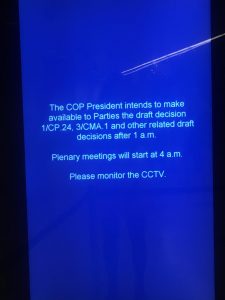 The fifth day of COP, aka. the “last” day of week 2, was greeted with both excitement and sadness. Excitement because, much like the rest of the world keeping up with COP24, Friday of Week 2 means the Paris Rulebook must be finalized soon. I put quotation marks around last because I’ve learned over the short few days I’ve been in attendance at the COP that the negotiations almost always go over the officially scheduled days. This year in Katowice, the pressure is even greater on the delegates and lawyers as the Paris Rulebook, the tangible rulebook of how to implement the Paris Agreement is the deliverable item of the conference. While the Paris Agreement was a momentous item since the Kyoto Protocol, the Paris Rulebook is arguably even more important. While the parties who have signed on to the Paris Agreement have all agreed upon the articles of the Paris Agreement, this year’s negotiations work on the logistical definitions and detailed workings of how this would work for different countries. As I, and everyone in the Spodek arena where the Cop is hosted, continue to watch the monitor for updates on the COP and CMP closing plenaries, we continued to watch the starting time pushed further and further back. Last night, the COP was scheduled to begin at 3pm, earlier this afternoon it was set at 7pm, and most recently I heard it would begin at 4am…