Rose Schrott, a PhD student in Dr. Susan Murphy's lab, was lead author on a recently published study that found that a gene linked to autism (DLGAP2) undergoes changes in the sperm of men who use marijuana. We spoke with her to better understand the study's implications, the need to not overstate any associations between marijuana use and autism, and future avenues of research.

Thanks for discussing your research. The CIPHERS pilot study found several epigenetic alterations in sperm of men who use cannabis and male rats exposed to THC. How/why did you decide to focus on DLGAP2 specifically?

We decided to focus on DLGAP2 for this study because the initial DNA methylation data showed that a specific region of this gene seemed to be significantly affected in the sperm of men who were using cannabis and because of its known role in disorders such as autism. In our initial study, within DLGAP2 there were 17 CpG sites – the position within DNA where DNA methylation can be added or removed – that were altered in the sperm of cannabis users compared to the controls. Interestingly, 9 of the 17 were all clustered together within one region of this gene. To me, that was an intriguing finding and made me wonder if there was some reason that this particular region of this gene was potentially more sensitive to the exposure.

What questions did you set out trying to answer in this new study? And what did you find?

The first question that we wanted to answer was whether there was a significant loss of methylation in sperm at the DLGAP2 gene with our human cohort of cannabis users. We focused on the region that had 9 CpG sites all clustered together and we were able to confirm the initial finding.

The next question we were interested in was whether changes in methylation at this region of the gene corresponded to changes in the way the gene was expressed. We used brain tissue to help answer this question because the brain is the part of the body where DLGAP2 expression is most consequential. We found that there was a significant relationship between methylation and expression, where more methylation was associated with less expression. We saw a slight sex difference here—for females, the results were significant (less methylation was associated with greater expression), but the results were not significant for males. This is interesting, but we can’t yet explain what it means, or why it happens this way.

Lastly, we also wanted to see whether the changes in sperm were able to be passed on to offspring. We used a rat model to test this and found that there were changes at Dlgap2 in the sperm of rats exposed to THC (the main psychoactive component of cannabis). We also found changes present in the brains of rats born to fathers exposed to THC (who were not themselves exposed). This begins to suggest that there is a possibility for changes in sperm to be passed on to offspring, but we need to perform larger studies to confirm this. I also plan to evaluate whether the male offspring of the exposed fathers show the same changes in their sperm.

What is the significance of the epigenetic changes found in the brains of rat offspring?

All of the findings from this study are preliminary given the small sample size of our study. That said, it is interesting and compelling that we were able to detect changes in methylation in the brains of offspring born to THC-exposed dads. Again, we need to perform larger studies to follow this up, but it is significant and meaningful that we were able to detect the same changes in sperm and the brains of offspring. We also need to determine whether or not these methylation changes are associated with changes in behavior of offspring. This can help us determine what the functional behavioral consequences of these exposures might be. 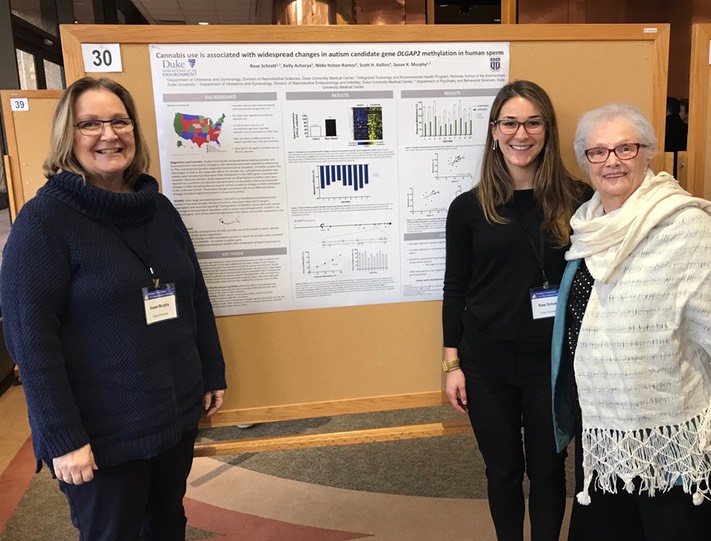 Rose (center) presenting her DLGAP2 research with Dr. Susan Murphy (left) and Dr. Phyllis Leppert (right, President of the Campion Fund and Professor Emerita at Duke) at the Triangle Consortium for Reproductive Biology in March 2019, where she won an award for best poster.

Can you talk a bit more about what you found with gene expression in human brain tissue and what it can tell us even though you couldn’t compare user and non-user groups?

With the human brain tissues, we found that there was a significant inverse relationship between DNA methylation and gene expression (which influences the way a gene functions in the body). The region of DLGAP2 that we looked at in brain tissue was the same region that we identified as being altered in sperm. While we cannot know about the exposure history of the tissues we analyzed, or about their autism status, the experiment demonstrates that methylation was involved in regulating (or influencing) DLGAP2 expression.

This has potential consequences given that the literature has demonstrated that small changes in the expression of this gene (and other related genes) can have larger consequences. So, if methylation changes in this region of sperm are passed on to children, and if that altered methylation state is also present in their brains, these changes may affect the way DLGAP2 is expressed in the brain – but more study is needed to confirm if this is what’s happening.

What about the sex differences shown with DNA methylation and gene expression from the brain tissue? Why might this be meaningful?

Our rationale for looking at the methylation-expression relationship by sex was because there is a known sex difference in autism incidence. Boys are four times as likely to receive a diagnosis as girls. Again, we don’t have any information about the autism-status of the brains we were working on, but it was interesting to us to see that there was a statistically meaningful sex difference. Importantly, we did see the same trend in the males and females where more methylation was associated with less expression, but this was only statistically significant in females.

We don’t yet know why this is or what it means, but we have some potential theories. First, there are certain genes that are more strongly associated with autism in girls compared to boys. So, while the relationship was the same in both males and females, the dysregulation of the gene may present more visibly in females. Another possible explanation is that the relationship between methylation and expression may be more strongly upheld in girls while it is lost in males. These are both just hypotheses that we have discussed given the findings, and it will take further experiments to support or negate.

You found that methylation decreased by less than one percent in the nucleus accumbens portion of the brain when comparing rat offspring of exposed and unexposed fathers. Can you say a bit more about the implications of these seemingly modest changes?

The nucleus accumbens is a region of the brain where Dlgap2 function is important. While the changes in methylation in the sperm were significant statistically, they were quite small.

The study has gained some attention from the public. For those of us who aren’t experts in epigenetics, what advice can you give about interpreting these findings in proper context, and not getting ahead of ourselves by linking something like marijuana use to autism?

Right now, we are only able to report that this association is present in the sperm of men who use marijuana. We don't know what, if anything, this means for children. We are not in a place to draw any conclusions about the specific cause of the observed epigenetic changes and want to caution people about interpreting our results in a manner that draws direct links to autism - that is not something we can say at this point.

We did see in our initial paper from last year that higher levels of THC in urine was associated with greater changes to DNA methylation at a subset of genes in sperm. In general, that suggests that using more may elicit more changes. Without a larger, more conclusive study, it may be best to reduce your risk by following the precautionary principle and stop using marijuana for as long as possible before trying to conceive.

Do you have plans to follow up on this study? If so, what questions are you hoping to answer?

Yes, we are currently working on following up on this study from a few different angles.

With the rats, we are using more animals and using a cannabis smoke extract that will more accurately resemble the different components of cannabis products that are used recreationally (containing both THC and other cannabinoids including cannabidiol, or CBD). For this study, as well as our current human study, we are analyzing whether abstinence from use for the duration of a sperm cycle will allow the methylation changes linked to the exposure to reverse and be “washed out”.

For DLGAP2 in particular, I am also really interested in seeing what other related genes may be similarly affected by cannabis exposure in the sperm, and plan to look into whether there is anything that may make these autism-related genes particularly vulnerable to exposures. I also want to perform more studies to determine if these methylation changes can be reliably passed on to offspring, and I want to ask more functional questions about what the methylation changes mean for gene expression in offspring. This I plan to do with our rat model. 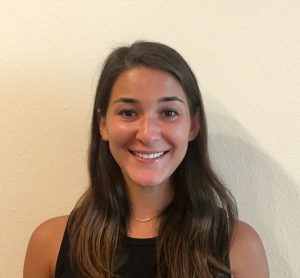