Our knowledge of the proton-wave function is gained mainly from scattering point like probes off the proton at energies high enough that individual quarks and gluons are resolved. In these high energy scattering events we access the proton wave-function in a frame where the proton moves at the speed of light. All components which are not ‘light like’ are suppressed. If one disregards transverse momentum of quarks and gluons, the remaining leading components of the wave-function can be described by three coefficients which correspond to different polarization projections of the wave function and can be accessed by experiments where the polarization of quarks and protons is varied. The least well known coefficient, the so-called transversity, can be identified with the distribution of the transverse polarization of quarks in a transversely polarized proton. Our group has been leading an experimental program in e+e- and pp collisions to extract transversity from di-hadron correlations. This data has now been used for a first extraction of transversity from di-hadron correlations:

Here is a picture of the detector from last year with open endcap doors: 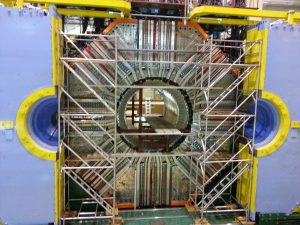