New Fintech and Insurtech services are popular with consumers as they offer convenience, new capabilities and in some cases lower prices. Consumers like these technologies but do they trust them? The role of consumer trust in the adoption of these new technologies is not entirely understood. From the consumer’s perspective, there are some concerns due to the lack of transparency these technologies can have. It is unclear if these systems powered by artificial intelligence (AI) are trusted, and how many interactions with consumers they can replace. There have been several adverts recently that emphasize that their company will not force you to communicate with AI and will provide a real person to communicate with are evidence of some pushback by consumers. Even pioneers of AI like Google are offering more opportunities to talk to a real person an indirect acknowledgement that some people do not trust the technology (Google Live, 2022). Therefore, this research attempts to shed light on the role of trust in Fintech and Insurtech, especially if trust in AI in general and trust in the specific institution play a role (Zarifis & Cheng, 2022).

The terms Fintech and Insurtech are gaining popularity because technology is enabling more customized solutions and it has a more decisive role for finance and insurance. At its core, what is happening is that AI is replacing the highly specialized, and highly skilled, human expert (Hornung & Smolnik, 2021). This transformation may be as fundamental to the nature of finance and insurance as the Internet was. The capabilities of AI and automation enable processes to be more scalable and effective. In finance, a loan can be approved in seconds based on behavioural data, to someone that was otherwise not creditworthy such as a student, e.g., Klarna, while in insurance a consumer can be compensated for a loss they incurred only moments ago without them even having to make the claim, through the use of sensors and Internet of Things (IoT) devices. While these changes are across the whole supply chain, possibly the greatest transformation is in the interaction and relationship between financial organizations or insurers and their consumers. While the time of the travelling insurer going from door to door, often referred to colloquially in England as “the man from the ‘Pru’” (Prudential insurance) has long gone, we are now moving towards no human interaction at all, at least in the relationship of the business with their consumer (B2C). As around 75% of Fintech and Insurtech are focused on retail, the consumer’s perspective is important (Catlin et al., 2017). While finance and insurance have some differences in their relationship with their consumer, there are also similarities, including the pivotal role of trust. 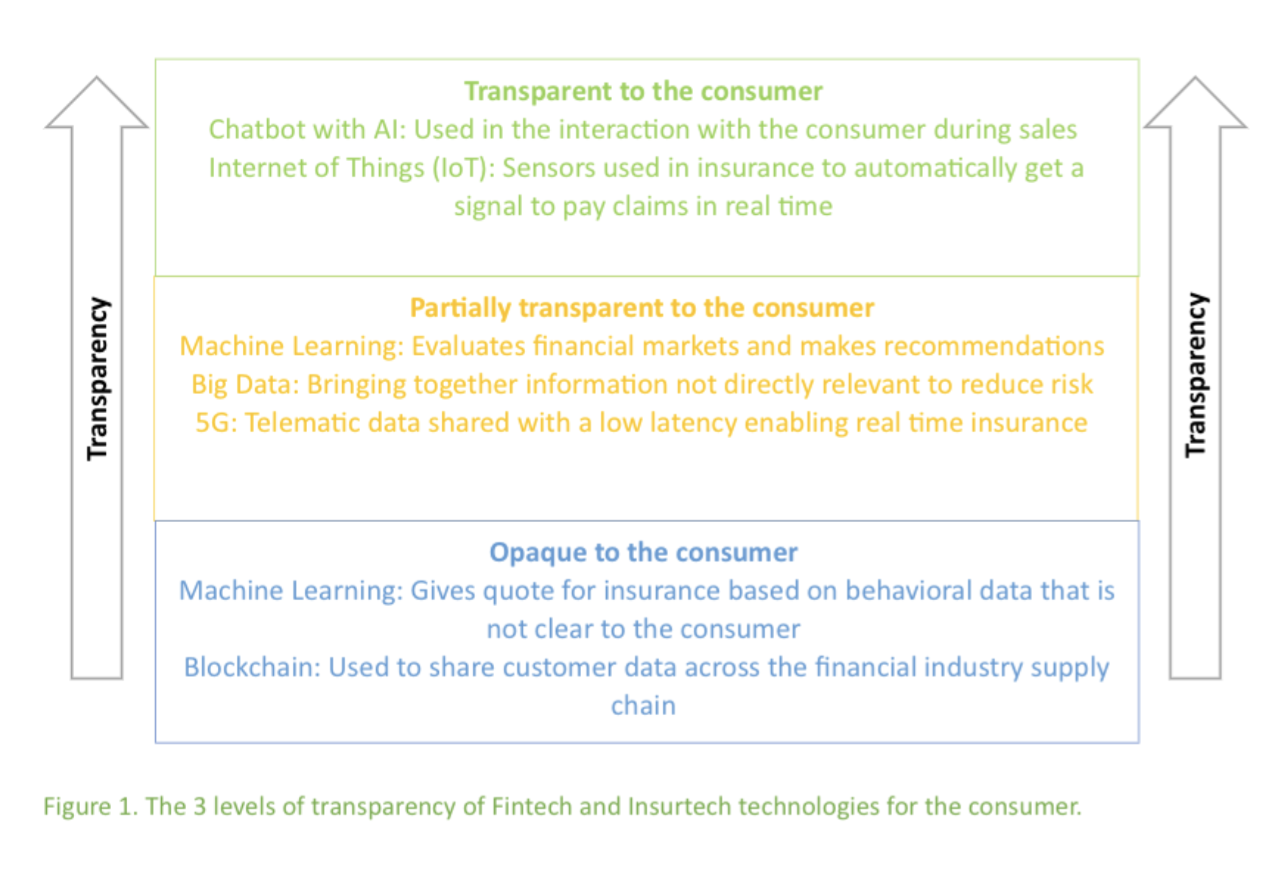 Trust is necessary whenever there are interactions between two sides, such as a seller and a buyer, and at least one faces some kind of risk. This means that trust is more important in some contexts than others. While trust has been researched for many decades, it became a more prominent concern with the introduction and expansion of the Internet. The loss of face-to-face interaction raised the perceived risk and the importance of trust (Pavlou, 2003). Once solutions were found to reduce the risk and build trust, trust became a smaller challenge. Consumer trust has emerged as a challenge for new transformative technologies like blockchain, virtual worlds and AI. These technologies have different levels of transparency to the consumer, as illustrated in figure 1. The lower the level of transparency the harder it is for the consumer to understand what the technology is doing and therefore the harder to trust it. Organizations want to utilize these technologies in a way that does not reduce consumer trust. The importance of trustworthy AI is so significant that international legal frameworks have been created to give some broad guidance on what is, and is not, acceptable (European Commission, 2021).

Fintech and Insurtech, powered by AI, are another transformative phenomenon where concern about trust is important and is influencing adoption. Many Fintech and Insurtech companies are startups, while incumbents in finance and insurance may change beyond recognition. For example, chatbots or virtual assistants that utilize AI are widely used to interact with the person purchasing insurance or making an insurance claim (Zarifis et al., 2021).

This research validates a model, illustrated in figure 2, that identifies the four factors that influence trust in Fintech and Insurtech. As with many other models of human behavior, the starting point is the individual’s psychology and the sociology of their environment. Then, the model separates trust in a specific organization and trust in a specific technology like AI. This is an important distinction: Consumers have beliefs about the organization they bring with them and other pre-existing beliefs on AI. Their beliefs on AI might have been shaped by experiences with other organizations.

Therefore, the validated model shows that trust in Fintech or Insurtech is formed by the (1) individual’s psychological disposition to trust, (2) sociological factors influencing trust, (3) trust in either the financial organization or the insurer and (4) trust in AI and related technologies.

Xusen Cheng is a Professor at Renmin University of China.

This post is adapted from the paper, ‘‘A model of trust in Fintech and trust in Insurtech: How Artificial Intelligence and the context influence it’’ published by the Journal of Behavioral and Experimental Finance and available here.