The global spread of COVID-19 has triggered large disruptions in financial markets. In response, central banks, such as the Federal Reserve, have created and continue to run a range of facilities to improve liquidity in financial markets, with the goal of promoting economic recovery. How effective are these facilities during a pandemic? In this blog post we highlight results from a recent working paper which provides some answers to this question by studying a past global pandemic: the 1918 Influenza epidemic. In particular, we show that banks with access to central bank liquidity were able to maintain their lending unlike banks without access. This result is important today because it illustrates the value to having a central bank provide liquidity to a wide range of financial institutions during a pandemic.

Why is Financial Stability Especially Important During Pandemics?

The economy’s ability to recover from a pandemic depends in part on the availability of credit. But a bank’s willingness to extend credit in such a situation depends in large part on the bank’s ability to handle the economic fallout from the pandemic. Indeed, to help banks weather the economic fallout from the current COVID-19 outbreak, central banks around the globe are using a full range of tools. Both the degree and the scope of the central bank liquidity support are unprecedented. In the United States, the Federal Reserve is implementing a variety of funding, credit, liquidity, and loan facilities, many of which provide liquidity to markets and entities considered outside the scope of central banks before the current pandemic and the 2007-09 financial crisis.

Even though many central banks agree on the necessity of an aggressive response to the current pandemic, there is disagreement on how exactly to respond, with many arguments both for and against the effectiveness of a wide range of policies. To help answer these questions, we investigate the effects of the 1918 influenza pandemic on banking lending and the role of the Federal Reserve.

A Short Description of the Data

For this study, we focus on New York State for two main reasons. First, New York was an important and large part of the U.S financial system back then, as it is now. As a result, studying New York provides us with a representative view of the financial system in 1918. Second, we were able to collect and combine detailed county-level data on both banks and influenza mortality statistics, enabling us to perform the necessary analysis.

Our constructed dataset is quarterly and contains balance-sheet and geographic information on all state-charted commercial banks and trust companies in New York from 1914 to 1919. Further, we have data on the rate of mortality due to influenza by county. Combining these data allows us to determine how the increases in mortality at the county level due to the 1918 pandemic affected local banks (we exclude banks located in major financial centers such as New York City, so as to compare relatively homogenous banks with simple locally-oriented business models.) Finally, we also identify which banks are members of the Federal Reserve System and therefore eligible to borrow from the Federal Reserve’s discount window. 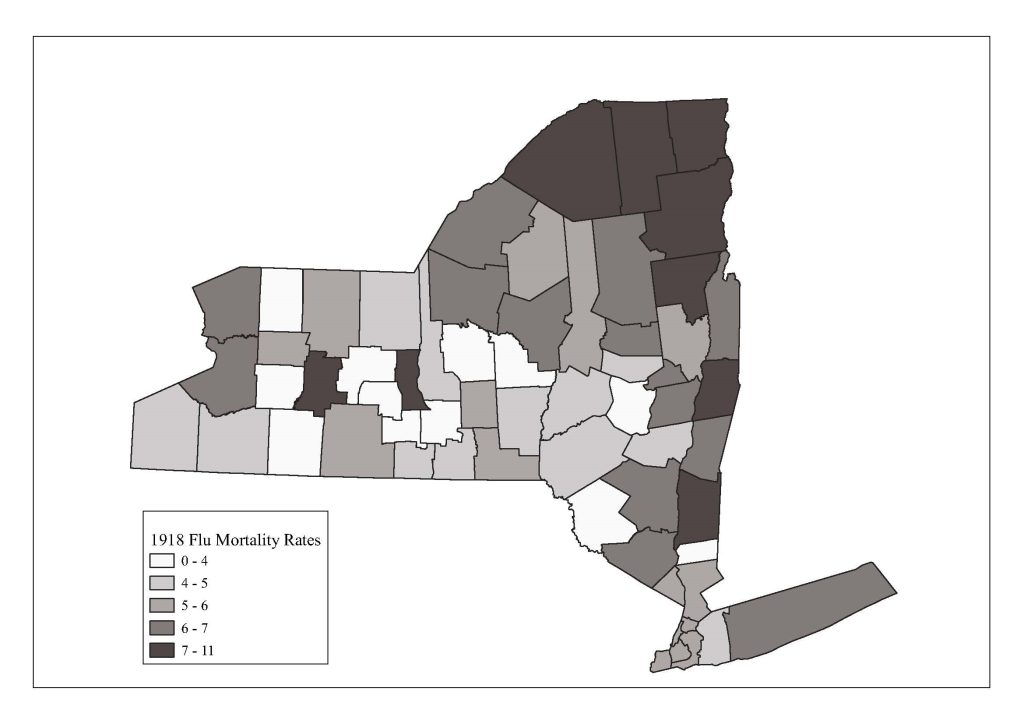 Using this cross-county variation in the data, we are able to estimate how the degree of the pandemic’s severity impacted banks. Further, using the information on Federal Reserve membership, we can measure whether access to the discount window was important to banks during the pandemic.

Although we examine a number of bank-related statistics in our study, here we highlight the results on bank lending. The main result on bank-lending can be seen in the aggregate data illustrated in the figure below. In this chart, the average loan growth rate for banks in counties that were the most and least affected by the pandemic, in terms of mortality rates, is plotted over time. Banks in these two sets of counties had similar growth rates in lending up until the pandemic, which struck New York state the hardest in the last quarter of 1918 and the first quarter of 1919. Bank lending was quite sensitive to the pandemic; banks in the most affected counties experienced negative loan growth rate whereas those in the least affected counties were able to maintain a positive rate. 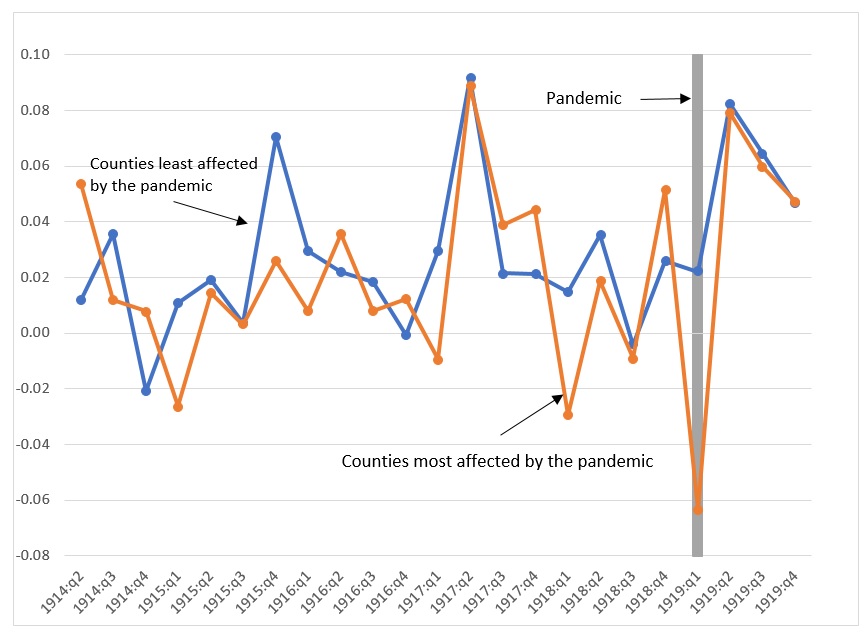 Source: Annual Report of the Superintendent of Banks and Authors’ calculations.

We formalize the intuition above using formal econometric analysis. We measure the impact of the pandemic on bank lending using a difference-in-differences analysis where the pandemic-related mortality rates are considered the treatment, while controlling for a host of differences across banks. The result from this analysis confirms the result mentioned above. It also finds a differential effect on banks depending on their membership status to the Federal Reserve System. The estimated coefficients imply that, on average, banks which were not members reduced lending by 7 percent in the pandemic period, whereas those banks which were members increased lending by over 50 percent. We argue that the mechanism behind this result is access to the discount window, as we observe that member banks increased their short-term borrowing from the Federal Reserve System in the pandemic period.

What are the Implications for Today?

Our study has implications for policy today because it affirms that the central bank liquidity support plays an important role in stabilizing the banking sector during a pandemic. Indeed, our study provides evidence that banks with direct access to central bank liquidity were able to continue to provide credit to the economy, whereas those banks without direct access were forced to curtail lending. Therefore, the results of our model suggest that it is important for the Federal Reserve to provide liquidity to a wide range of financial intermediaries in times of distress, much as the Federal Reserve has been doing through various lending facility programs during the current COVID-19 pandemic.

Haelim Anderson is a Senior Financial Economist at the Federal Deposit Insurance Corporation.

Jin-Wook Chang is an Economist at the Federal Reserve Board.

Adam Copeland is an Assistant Vice-President at the Federal Reserve Bank of New York.

This post is adapted from their paper, “The Effect of the Central Bank Liquidity Support during Pandemics: Evidence from the 1918 Influenza Pandemic,” available on the Federal Reserve Bank of New York’s website.