In September 2013, the Federal Reserve (Fed) introduced the Overnight Reverse Repurchase (ONRRP) facility to improve its control over short-term interest rates (Frost et al. 2015). To achieve this goal, the Fed offers safe assets in the form of overnight reverse repos to a broad range of market participants, including money market funds (MMFs). Since these funds provide vital short-term funding to both financial and non-financial corporations, concerns were raised that in times of financial stress, MMFs would rebalance their portfolios to the ONRRP, disrupting the supply of funding to corporations. In other words, a possibility was raised that interest rate control could come at the expense of a flight to safety in bad times. On the other hand, it is also possible that providing a safe asset to MMFs would reduce the risk of outflows, in turn allowing them to continue lending to riskier counterparties in times of stress. Thus, how MMFs’ access to safe assets affects flows and lending during stress events remains an empirical question.

Our paper investigates how access to the ONRRP facility interacted with money market stress during the October 2013 debt limit impasse. On October 1, 2013, a week after the ONRRP facility started its daily operations, the government shutdown began. Yields on Treasury securities with payments scheduled shortly after mid-October increased markedly because of the possibility that Congress would not pass legislation to raise the debt limit in a timely fashion. The market did not expect an outright default by the U.S. government; instead, investors priced the possibility of a delay in principal and interest payments scheduled between mid-October and mid-November. We call these Treasuries at risk of delayed payments “at-risk securities” or “at-risk exposures” (more details about the 2013 debt limit are presented below). Usually, Treasuries are considered the safest available assets (Gorton 2017; Krishnamurthy and Vissing-Jorgensen 2012); however, around several debt limit episodes, they experience a sharp drop in price. Around the October 2013 episode in particular, the safest assets available to some MMFs were the overnight reverse repos offered by the Fed (ONRRPs).

The question of interest is: does access to safe assets reduce MMFs sensitivity of flows to at-risk exposures, and if so, does it comes at the expense of a flight to safety. In order to assess the impact of the provision of safe assets on MMFs’ behavior, we exploit the fact that some MMFs perfectly meet eligibility criteria to become Fed counterparties, but were unable to apply in mid-2013 due to their failure to meet the last application deadline of mid-2012. Therefore, for identification purpose, we compare MMFs that have access to the ONRRP facility with similar sized MMFs size that currently meet the eligibility criteria but do not have access to the Fed since they were not yet eligible around the 2012 application deadline.

In the paper, we provide two main results. First, being an ONRRP counterparty has a stabilizing effect: it reduces the sensitivity of outflows to at-risk exposures. Second, we do not find any evidence of a flight to safety prompted by the ONRRP facility. On the contrary, during periods of stress, ONRRP counterparties with exposures to at-risk securities continue to intermediate funding to riskier borrowers relatively more than comparable funds with similar at-risk exposures, but without access to the ONRRP facility.

Overall, the results suggest that the availability of safe assets has a stabilizing effect without triggering a flight to safety. The perceived extra-safety of MMFs with ONRRP access may be due to their ability to invest in a default-free asset while allowing them to accommodate redemptions—by not rolling over ONRRP investments—without incurring any “fire-sale” losses. This ability to build a safety buffer free of any counterparty risk may affect investors’ expectations and reduce outflows during a crisis, in turn allowing the MMF to keep larger exposures to risky borrowers.

Identification rests on the exogeneity of at-risk exposures and on the lack of any systematically relevant difference between funds in the treatment and control groups. We address both concerns by conducting several checks. Regarding the exogeneity of at-risk exposures, we show that neither being an ONRRP counterparty, nor the general risk profile of the fund, is correlated with at-risk exposures ex-ante, namely prior to the unfolding of the crisis. However, it could still be the case that funds with no exposure to risky Treasuries possess better managerial skills, and thus stay away from those securities. If so, we would observe a positive and significant correlation between at-risk exposures during the 2011 debt limit episode and at-risk exposures for the 2013 episode. However, the two are uncorrelated.
Finally, our results could be driven by MMFs that are ONRRP counterparties in 2013 being systematically less sensitive to runs than other funds for reasons unrelated to the access to safe assets. To test this, we exploit the fact that during the 2011 debt limit episode, there was no ONRRP facility, and find that funds that are ONRRP counterparties in 2013, are more sensitive to the 2011 crisis than other funds. If anything, this finding strengthens our main result that access to safe assets has a stabilizing effect for MMFs.

Overview of the 2013 Debt Limit Episode

The debt limit refers to a limit on the amount of money that the U.S. government can borrow from the public. Once reached, Congress has the option to suspend the debt limit until a later date; however, if Congress does not act in time, the Treasury can invoke a debt issuance suspension period (DISP) which makes certain extraordinary measures to borrow additional funds available (typically withholding transfers to certain government trust funds). These extraordinary measures, together with current cash balances, are used to meet current payments. Usually, the Treasury Secretary informs Congress about the date at which the extraordinary measures are expected to run out (the “breach date”). 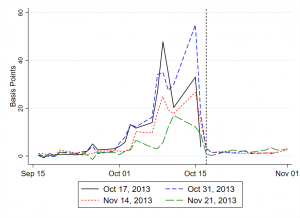 This figure shows the yield (in basis points) of some of the Treasury bills maturing around the 2013 debt limit episode; each date in the legend represents a security maturing on the specified date. The vertical dashed black line represents October 17, 2013, the “breach date”. As the maturity date of the bills moves further past the breach date, the spike in yields is reduced, indicating that markets priced the possibility of a delay in payments on Treasury securities.

In May 2013, after the previous debt limit suspension expired, Treasury Secretary Lew declared a DISP and started using extraordinary measures to meet federal obligations (Austin 2019; Cashin et al. 2017). On August 2, Secretary Lew indicated that the extraordinary measures could be extended to last until October 11, in light of stronger fiscal revenues. On August 26, he updated Congress that the extraordinary measures would be exhausted in mid-October. Then, in a September 25 communication, Treasury indicated that it expects to exhaust its borrowing capacity on October 17, at which point it would have only $30 billion in cash to meet current obligations. To make things worse, the Congress could not pass a budget deal and on September 30, the government shut down. This acted as a wake-up call to markets that the standoff in Congress may delay a timely resolution of the debt limit; as a result, yields on Treasury securities with payments shortly after October 17 increased (Figure 1). On October 16, in the third week of the shutdown, and with only one day to the October 17 breach date, Congress passed a budget deal that included the suspension of the debt limit, thereby putting an end to the crisis.