The Global Financial Crisis exposed taxpayers to potential losses from bank failures and significantly disrupted financial intermediation. A natural question arises from these experiences: Should regulators require banks to hold more capital and, if so, in what form? Higher minimum requirements reduce losses to stakeholders in case of bank failures but may constrain intermediation when it is most scarce—during financial crises. On the other hand, regulatory capital buffers do not constrain intermediation (provided that the bank is willing to constrain payouts instead).

This blog post describes a model of optimal bank capital and discusses implications for bank capital regulation.[1] In the model, banks use equity and uninsured debt to fund loans to firms. Uninsured debt is a significant funding source for banks (Figure 1) and, importantly, affects bank actions during financial crises through funding market pressure (Gorton and Metrick, 2012). There are two key frictions in the model that determine how banks use equity and debt. First, bank equity is costly in the sense that bank shareholders demand a higher return than holders of bank debt. Second, holders of bank debt are wary of potential bank moral hazard, in the sense that they require that bank shareholder value is not too low relative to the size of the bank balance sheet. 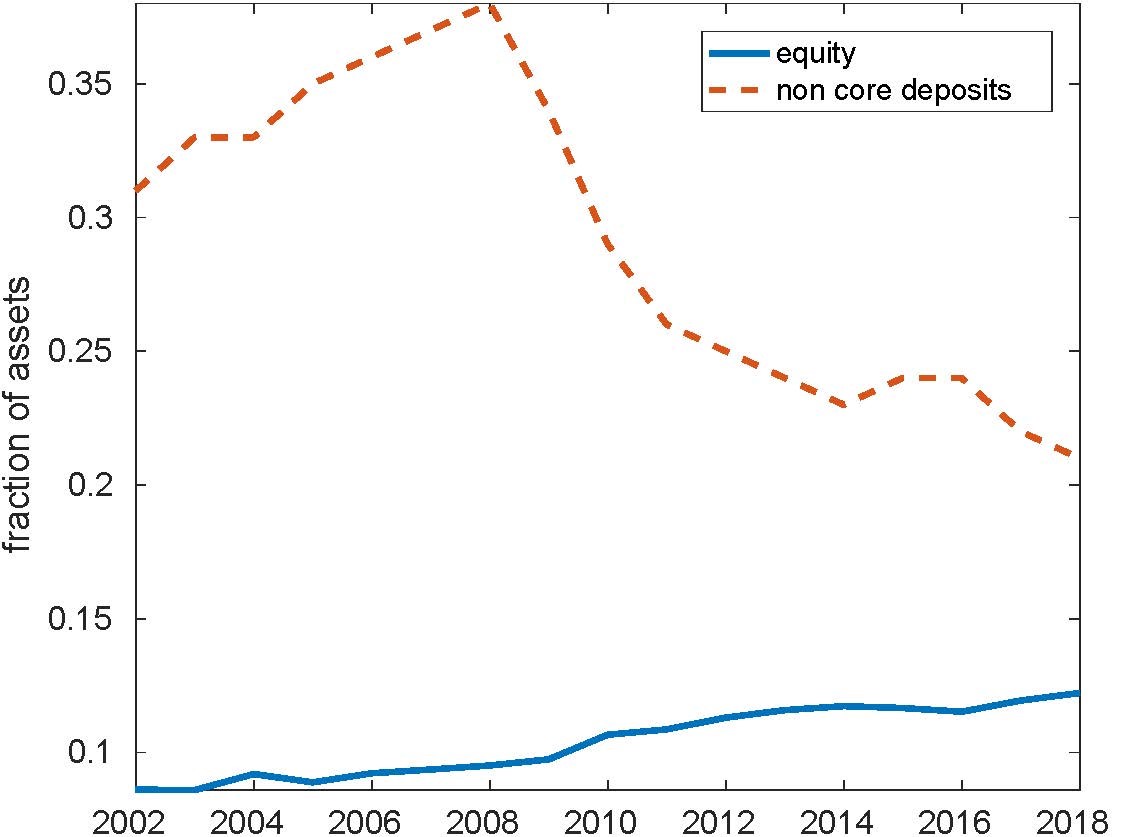 Figure 1: Equity and noncore deposits as a fraction of assets for the largest US bank holding companies (https://www.ffiec.gov/npw/FinancialReport/BHCPRReports).

Together, these frictions create a challenging risk-management problem for the bank. On the one hand, when bank equity is too low, bank moral hazard concerns imply that banks become funding constrained. On the other hand, banks hold costly equity—as a provision in case of low loan repayments—only if there is a strictly positive probability that they actually become funding-constrained. The two frictions therefore imply that banks lose access to the market for debt financing occasionally, at which point there is a credit crunch in the economy.

Implications for bank capital regulation are obtained from the model by comparing the allocation in competitive equilibrium with the constrained-efficient allocation. Specifically, the difference between these two allocations can be interpreted as due to optimal capital regulation.  There are two general-equilibrium channels that can be exploited in a constrained-efficient allocation.  First, it is feasible, in the sense of satisfying bank participation constraints, to require banks to hold more costly equity during times of high loan repayments so long as overall bank profitability is somewhat raised. Second, it is possible to allow low bank equity, and high bank leverage, during times of low loan repayments so long as bank profitability is raised significantly and in a way that satisfies the bank debt funding constraint.

The main result is that optimal regulation requires banks to hold more equity when loan supply is high, but it also allows banks to hold very little equity when loan supply is low. It is crucial that banks are also allowed to rebuild equity slowly after loan supply has been low—otherwise, loan supply would become very low when banks have very little equity. The reason for this is that if banks were to anticipate that they would have to rebuild costly equity quickly, then they would have lower shareholder value and, because of increased moral hazard concerns, reduced access to debt funding when equity is low. In other words, regulation must take into account the fact that it cannot stimulate loan supply when bank equity is low by setting an equity requirement that is lower than the one implicitly imposed by the market for debt funding.

Therefore, optimal regulation not only reduces the regulatory burden during a recovery, but also requires banks to increase loan supply somewhat more slowly than they otherwise would. The resulting temporarily higher lending margins further raise bank dividend payout ratios during the time loan supply recovers, and further improves banks’ access to debt funding during the time when loan supply is low. In that sense, when banks are offered a stake in the recovery from a credit crunch—through temporarily less onerous regulation and higher profit margins—then the credit crunch is less severe.

Three main policy implications can be derived from the analysis. First, minimum capital requirements should be as low as possible while still discouraging moral hazard. Second, any additional capital that a regulator wants banks to hold should take the form of “capital buffers.” The difference between a minimum requirement and a capital buffer is that banks are not forced to reduce the size of their balance sheet when they breach the latter. Specifically, banks may reduce equity payouts instead of deleveraging. Third, capital buffers that banks build up during good times are most effective in stabilizing lending during a financial crisis when banks are allowed to rebuild them slowly—while maintaining a high equity payout ratio—during the recovery from a financial crisis.

These policy implications can be compared with recent recommendations for bank regulation under the Basel Accord (Basel Committee on Banking Supervision, 2010), denoted “Basel III.” First, the analysis suggests that market-imposed capital requirements are lower during financial crises for given bank borrower default rates. Adherence to rigid microprudential capital requirements at all times may therefore not be optimal. In practice, giving banks some discretion in calculating risk-weighted assets during times of crisis can be justified for this reason—since bank margins are high when aggregate bank equity is low.[2] Second, there should be a buffer on top of market-imposed capital requirements—augmenting voluntary bank loan loss provisioning—that can be used to stabilize lending when bank equity is low. However, no equity payouts are allowed when this buffer is being used. This buffer resembles the capital conservation buffer under Basel III. Third, there should be an additional buffer that can be used when the first one is depleted. The buffer can be used for lending. It can also be used for dividend payouts—or, equivalently, “released”—but only once the first buffer has been rebuilt. This additional buffer resembles the countercyclical capital buffer (CCyB) under Basel III. In my model, it is crucial that the regulator raises bank future profitability temporarily during the time when banks use the additional buffer to pay out dividends. Otherwise, dividend payouts in the face of low bank equity would threaten bank solvency. In practice, bank profitability could be supported by recapitalizations financed by taxes on bank lending or by regulatory capital restoration plans that emphasize restrictions on asset growth over restrictions on payouts.[3]

In practice, there is a broad consensus among regulators that banks should hold more capital on average (e.g., Fender and Lewrick, 2016). Regulators have also identified a number of “externalities” that determine what they consider the desired level of capital over time. Examples of such externalities are temporarily high levels of debt that might expose borrowers to sudden changes in asset prices, or exchange rates, together with associated feedback effects (e.g., Lorenzoni, 2008; Bianchi and Mendoza, 2011). Another externality might be low bank provisioning stemming from a temporary scope to use accounting discretion that might expose the economy to sudden bank deleveraging (Beattyand Liao, 2011).  Determining the desired level of bank capital likely requires regulator judgment since not all of these externalities might be equally important at a given time. Indeed, while the Savings and Loan crisis was clearly related to insufficient recognition of risk by banks, the recent financial crisis was related to excessive borrowing as well as banks’ hidden exposures.

This post focuses on a different externality that is related to the price of bank equity. This externality is always important because it arises ex post, or conditional on a financial crisis occurring. Specifically, promising banks future profits during a financial crisis lowers concerns about bank moral hazard and thereby reduces pressure on banks to deleverage. The analysis suggests that regulation should take seriously its ability to affect bank profitability ex post in a way that complements the existing regulatory focus on addressing risk buildup ex ante.

Banks may lose access to external funding on occasion. This can create a socially costly credit crunch in the economy during which banks are forced to reduce their lending activity. This paper studies constrained-efficient capital regulation that aims to prevent and mitigate such credit crunches and derives two implications for macroprudential policy. First, additional capital buffers should be imposed ex ante. Because of strong non-linearities present in the model, such buffers should be always activated during good economic times. Second, capital buffers should be reduced ex post during severe credit crunches and temporarily thereafter. Bank default at increased levels of leverage is avoided by granting higher future profits to banks. A macroprudential regulator would affect bank profitability dynamically to smooth out the scarcity of bank lending over financial cycles.

The main policy implication is that capital buffers should be large eventually—however, banks should be given sufficient time to rebuild them during recoveries from financial crises. The idea is to prevent harsh treatment of banks in the immediate aftermath of a crisis to avoid adding to concerns about bank moral hazard during crises. The pressure on banks to return external funding during a crisis is then lessened such that they can use buffers to maintain lending as much as possible. The countercyclical capital buffer  under Basel III is time-varying and therefore can potentially be designed to take into account these implications.

Fender, I. and U. Lewrick (2016). Adding it all up: The macroeconomic impact of Basel II and outstanding reform issues. BIS Working Paper (No 591).

[2] For evidence and theory on “regulatory forbearance” see Huizinga and Laeven (2012), Repullo (2013) and Repullo and Suarez (2013). However, my model justifies forbearance only to the extent compatible with the prescription in Bagehot (1873)—to provide funding only to solvent institutions—because the market funding constraint, which rules out default and moral hazard, is imposed at all times.