Small, young private firms in China have long been struggling to obtain formal bank loans. To bypass financial constraints, these firms have resorted to alternative, less formal financing sources. In this context, Chinese authorities are aiming to develop a more formal, market-based, and better regulated credit sector. In a Staff Working Paper, I argue that carefully designed credit sector reforms are crucial to avoid throwing out the baby with the bath water. Despite the interest rate liberalisation progressively implemented by Chinese authorities, a general crackdown on alternative finance would remain detrimental to the dynamism of small enterprises. Selectively tightening the limits around informal financing could better balance financial stability on the one hand, and welfare and efficiency on the other.

Since the start of the 20th century, business lending in China has been controlled by four state-owned banks and mostly directed to large, state-owned enterprises. While credit has been readily available for state-owned enterprises, private, small and medium enterprises (SMEs) have been struggling to obtain formal bank loans, thereby hindering these firms’ abilities to invest, grow and spur economic growth. Access to informal, alternative funding – mainly social networks and personal connections –  is key for SMEs’ development. A well-known example is Wenzhou, a prosperous Chinese city where a clan-like social organization and strong mercantile traditions facilitated the flow of credit to SMEs

Survey data from the World Bank show that in 2003, before the start of banking sector liberalisation, large, private enterprises were financing the majority of their investments through formal bank loans. Enterprises with more than 1,000 employees, for instance, financed 58% of their total investment through bank loans (See Chart 1). This reflects the incentives given to banks by Chinese authorities in favour of loans to larger enterprises. Conversely, smaller enterprises faced strict collateral requirements and were often unable to secure bank loans – problems that persist to this day. In addition, SMEs could not access capital by raising equity (listing shares) because Chinese capital markets were not well developed. To bypass these financial constraints, SMEs could turn to self-financing (reinvesting their profits). However, this is only possible for enterprises that are active long enough to  accumulate sufficient profits. Instead, small, young firms rely on informal financing sources through social connections; obtaining funding through family, friends, non-listed equity or moneylenders (referred to as “alternative” in Chart 1 and for the remainder of this post) 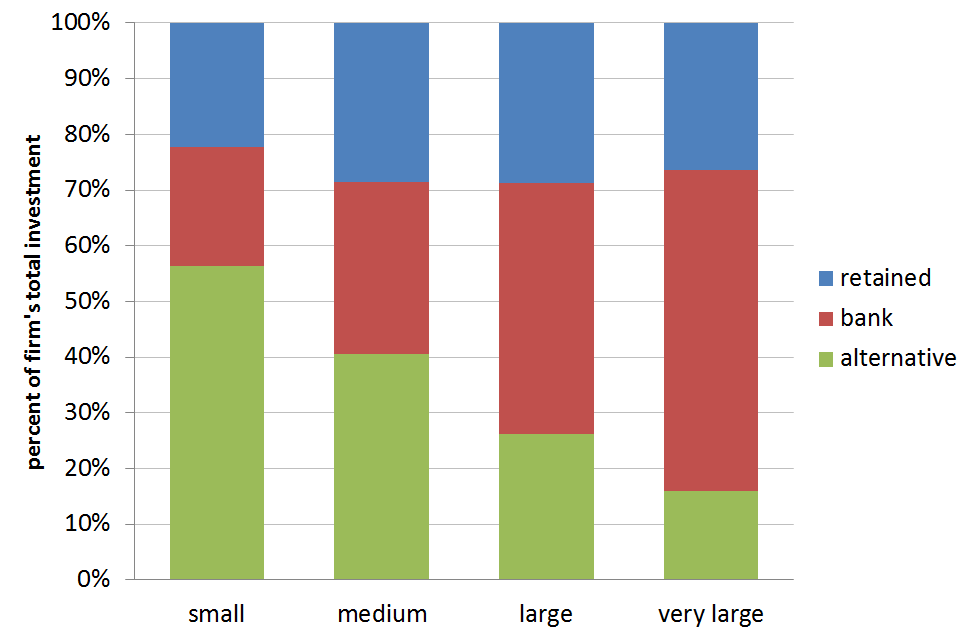 To better understand the importance and implications of alternative finance and credit sector reforms, I built a theoretical model where heterogeneous enterprises choose how much to invest and how to finance it between bank loans, retained earnings and alternative finance. This model is able to reproduce enterprise decisions observed in the data in a general equilibrium framework, and allows me to simulate the Chinese aggregate economy and individual firms’ behaviour under various scenarios.

First, without introducing any credit sector reforms, and assuming alternative finance did not exist, I find that aggregate output would be 6% lower and aggregate capital 7% lower. The presence of alternative sources of funding has a strong positive impact on the main economic aggregates –  increasing aggregate consumption by 6% and aggregate welfare by 4% – and decreasing resource misallocations by 13%. Indeed, alternative finance provides enterprises facing credit constraints with additional resources to finance investment and produce more efficiently.

Keeping in mind the impact of alternative finance in a pre-reform scenario, let us now evaluate the impact of credit sector reforms in China on national aggregates.

What are these reforms?  They concern three main areas:

The impact of the reforms: banking sector liberalisation…

Chart 2: Impact of liberalisation reforms (1. and 2.), including or not alternative finance in the model 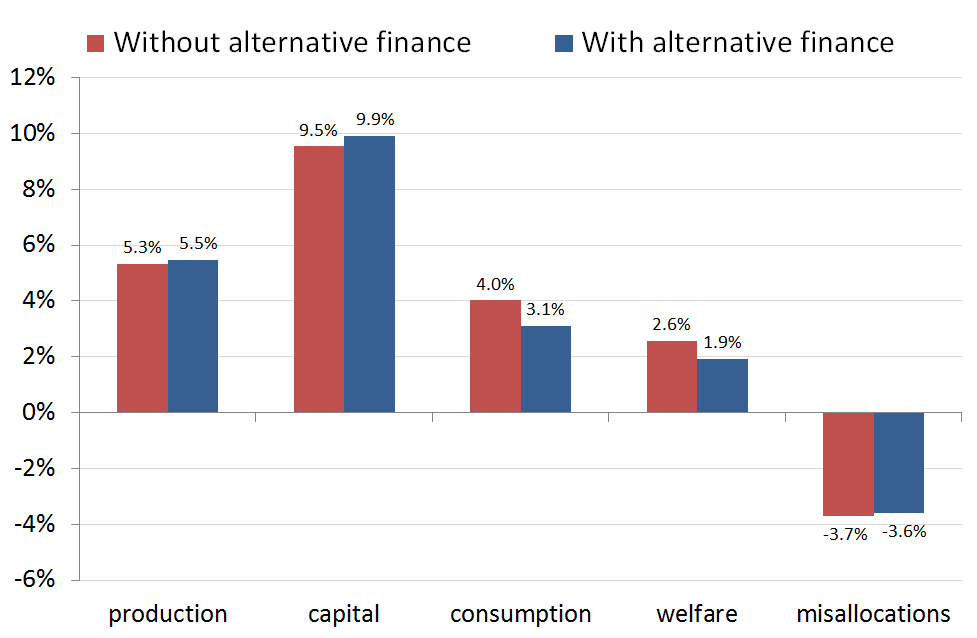 … with a tighter regulation

Despite its overall positive impact, liberalisation reforms increase the borrowing capacity of all firms, which pushes up the share of non-performing loans by 11%. A reasonable policy reaction to this change may be to tighten financial regulation.

The last, and most realistic, reform scenario I examine is to combine the liberalisation (points 1 and 2 above) with a tighter regulation (point 3). Since alternative finance is a broad term, my model separates it into two types: (i) “cheap” alternative finance, corresponding to funds obtained from close social circles, requiring very low interest rates, and generally easier to obtain than bank loans; (ii) “expensive” alternative finance, for which cash-starved enterprises have to search beyond their close social circle, and which requires much higher interest rates – an extreme example being moneylenders, charging very high interest rates to enterprises that have no access to cheaper financing sources.

In the simulations, tightening financial regulation means either shutting down all alternative finance, both cheap and expensive, or shutting down only the expensive kind. Despite being combined with the liberalisation of the banking sector, shutting down all alternative finance (Chart 3) has a strong detrimental impact on the economy. This reform scenario lowers both production and consumption, despite an aggregate capital increase. Producing less with more capital means that resources are used in a less efficient way, which is corroborated by the 10% increase in resource misallocation. Logically, aggregate welfare decreases by 0.7%. The easier access to formal credit and the interest rate liberalisation cannot compensate for the disappearance of all alternative funding sources.

Chart 3: Impact of liberalisation and regulation reforms, when alternative finance is successively maintained, partially shut down or fully shut down 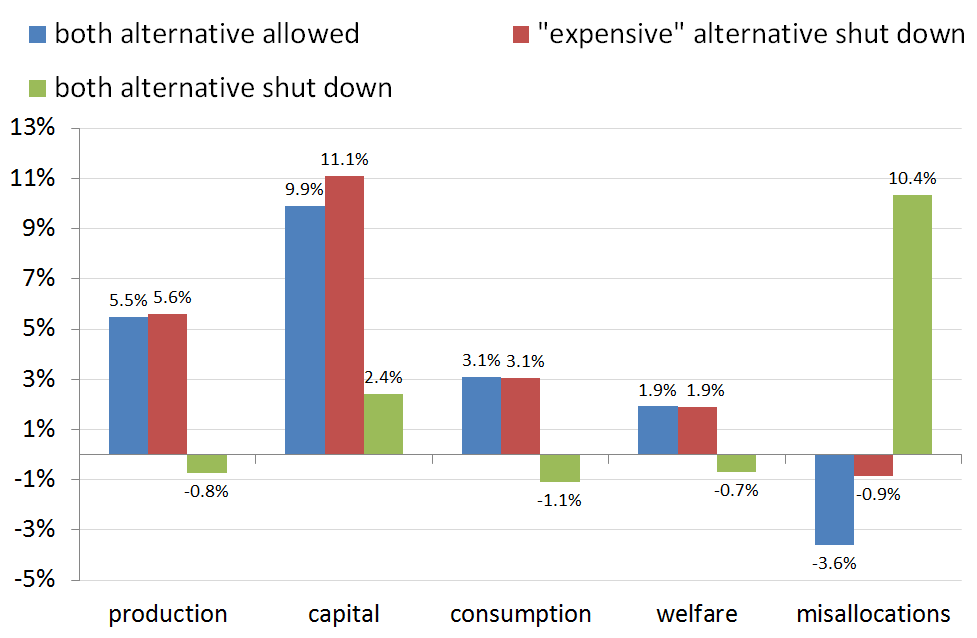 The red bars in Chart 3 show the effects if only expensive alternative finance is shut down. Although efficiency gains are not as high as without regulatory tightening, both capital and production increases are more pronounced. As a result, consumption and welfare gains from liberalisation are almost entirely preserved.  This combination of reforms – banking sector liberalisation and selective regulatory tightening – seems the most desirable answer to the trade-off between efficient resource allocation and financial stability. While limiting the power of moneylenders, it preserves the role of social networks in the provision of finance for SMEs.

Alternative finance allows Chinese firms to partially bypass credit constraints, thus facilitating a better resource allocation and a higher production level, and should be accounted for when examining ongoing liberalisation and regulatory reforms. Even if conducted in parallel to a reform of the Chinese banking system, tightening the regulation of alternative finance should be careful and selective, so as to avoid undermining the dynamism of smaller, younger enterprises unable to obtain formal loans. The PBOC has recently proposed a plan to facilitate bank loan access for micro- and small enterprises. While the crackdown on the informal financing sector has been ongoing for several years, this plan could partially compensate for the increased financing constraints faced by SMEs, and help strike a balance between liberalisation, regulation and financial stability.