This post is the fourth in a series that highlights various elements of a new online course titled “FinTech Law and Policy.” The course is available to all on the Coursera platform (it can be audited for free) and covers the key legal and regulatory issues confronting the FinTech industry today. You can view all previous posts in the series here.

Why have we yet to see some version of Uber or Airbnb disrupt the banking industry? Before you answer that question, think about how these two companies got to where they’re at today. When Uber wanted to operate in New York City, did they go to the New York City taxi and limousine commission and ask for permission?  Same for Airbnb, did they seek a hotel license to operate in each city?  Of course not! These two companies identified a market need, built a product to meet this need, and then released it to the public. Consumers flocked to these products because they were far superior to anything else out there, and government agencies around the world were left with little choice but to accommodate these new products, lest they provoke their citizenry.

So again, why hasn’t something like Uber or Airbnb happened in the banking industry? Is it because most of us are generally satisfied with our current bank and therefore there is no market need? Given the lack of consumer trust in the financial industry, especially since the financial crisis, I would say the answer is no. The real reason is that the banking industry is fundamentally different from any other industry because you’re dealing with people’s money. Along with that, comes a high degree of regulation by multiple regulatory agencies at the federal and state level.

In essence, the Uber and Airbnb mentality of “it is better to ask for forgiveness than permission,” simply does not work in finance. This does not mean that some FinTechs haven’t aspired to be the Uber or Airbnb of finance. After all, many of the technologists at the forefront of the FinTech boom are cut from the same cloth as those that ushered in the sharing economy, adhering to the Silicon Valley mantra of “move fast and break things.”  These people are risk takers, who spend little time thinking about, and have little regard for, regulations. Some of these early FinTech firms sought to deploy their products and services before regulators had a chance to understand exactly how the product worked and how it fit into the existing regulatory regime. This method does have its advantages, mainly that consumers might actually enjoy the product and benefit from its use. This puts pressure on the regulators not to intervene too aggressively. But of course, this strategy also carries significant risk – the biggest being that one or more regulatory agencies shuts the company down for good.

As time has gone on and regulatory agencies have increasingly exerted their authority, FinTech innovators have come to understand that disrupting any aspect of finance is no easy task. This reality has led to a shift in mentality within the FinTech industry, from disruption to partnership. Now, the stated goal of many new FinTech firms is to partner with, or be acquired by, a traditional financial institution.  We can see this fact reflected in figure 1.1 below, which shows how venture capital funds are cashing out of their investments in FinTech companies. We can see clearly that the most common way for venture capital funds to exit their FinTech investments is through a strategic acquisition, meaning that the FinTech company they’ve invested in was purchased by a financial institution or possibly even a larger FinTech company. The number of strategic acquisitions has been steadily increasing and reached a peak in 2017 with fifty-nine. 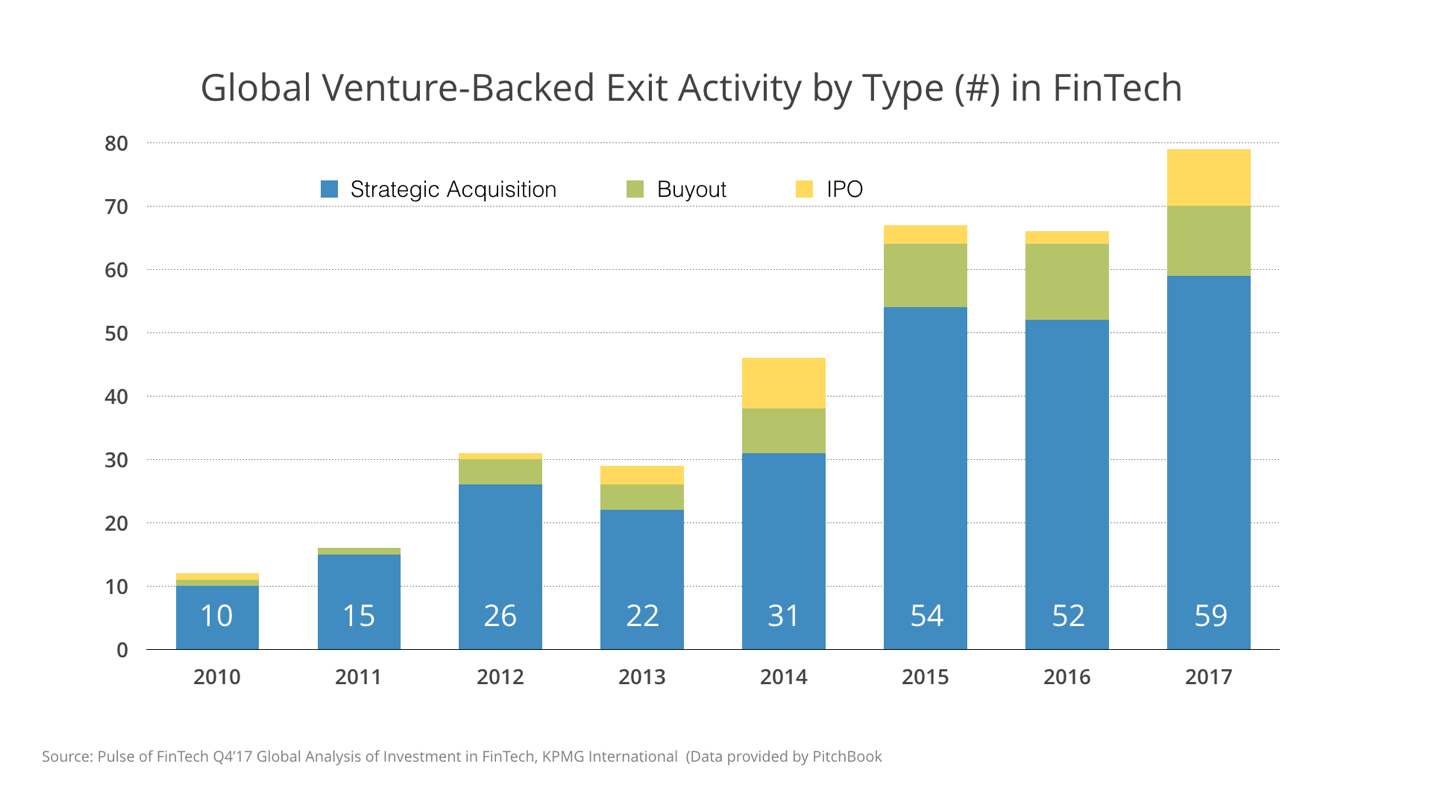 Banks are also going to be more naturally cautious when it comes to working with FinTech firms because they are liable for risks posed by third parties. This means that banks will spend significant amounts of time conducting due diligence on the practices and controls in place at FinTech firms seeking to partner with them in order to prevent unnecessary compliance or operational risks. Small banks with fewer resources to dedicate to due diligence may be unwilling to risk partnering with FinTech firms. Bank due diligence can lead to lengthy delays in establishing partnerships, which can put FinTech firms at risk of going out of business if they do not have sufficient funding on-hand and are unable to access new customers on their own.

Despite these challenges, a bank-FinTech partnership can be mutually beneficial. For banks, partnering with a FinTech can allow them to offer greater consumer choice and a better customer experience, along with potentially lowering costs through the more efficient use of new technologies. For FinTechs, partnering with a bank provides access to customers, financial resources, and regulatory expertise.

Figure 1.2 shows the growth in global investment activity in FinTech companies by quarter, dating back to 2010. This includes investment from venture capital funds, private equity funds, and investment through mergers and acquisitions. There was steady growth in the years immediately after the financial crisis and this growth peaked in the fourth quarter of 2015 with $24.8 billion dollars in new investment. FinTech investment activity has cooled off significantly since then in terms of deal value but the number of new deals closing every quarter has remained relatively stable, with over 300 new deals closing every quarter since the beginning of 2014. Figure 1.3 shows that US investment activity in FinTech companies has followed a similar trend as global activity, with the value of new deals peaking in the fourth quarter of 2015. 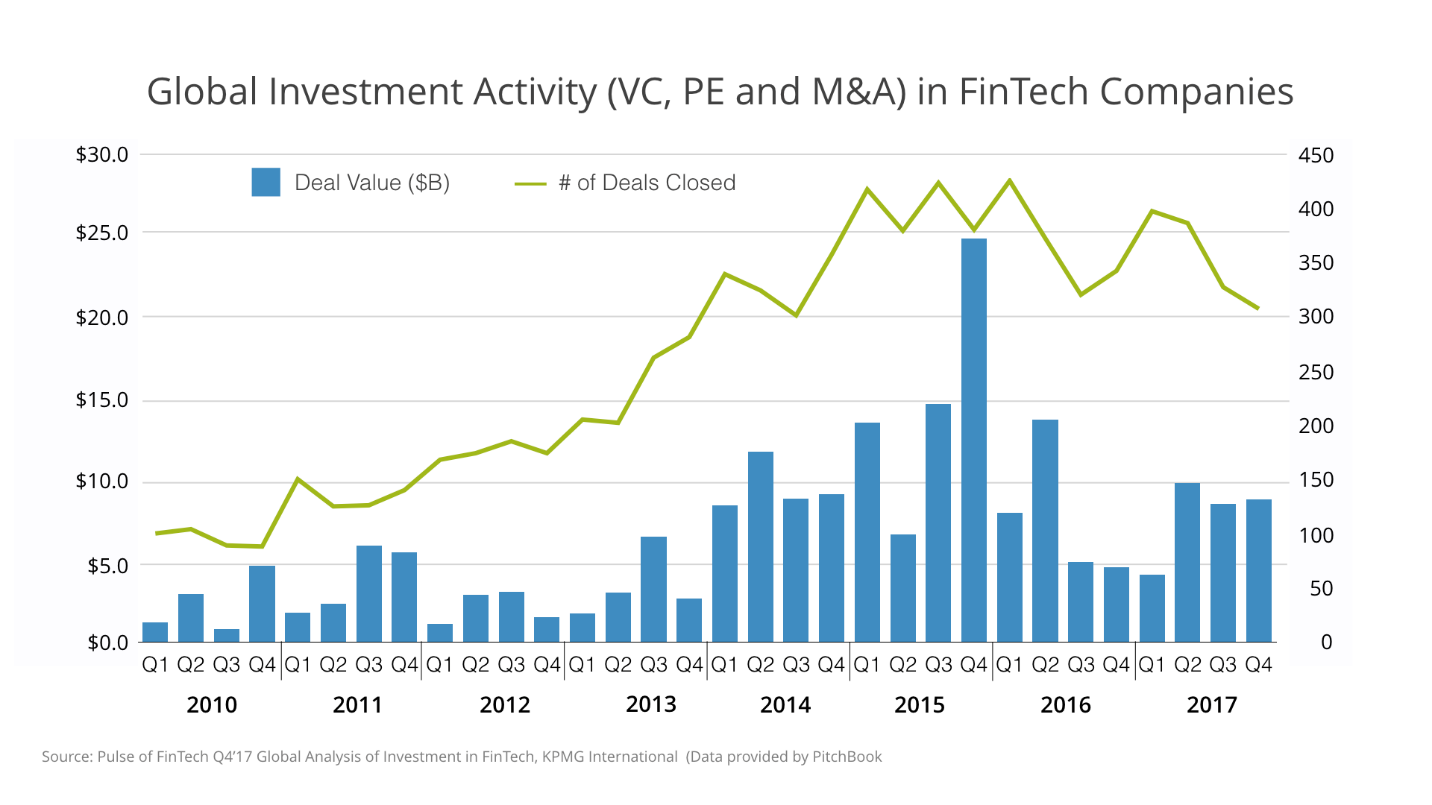 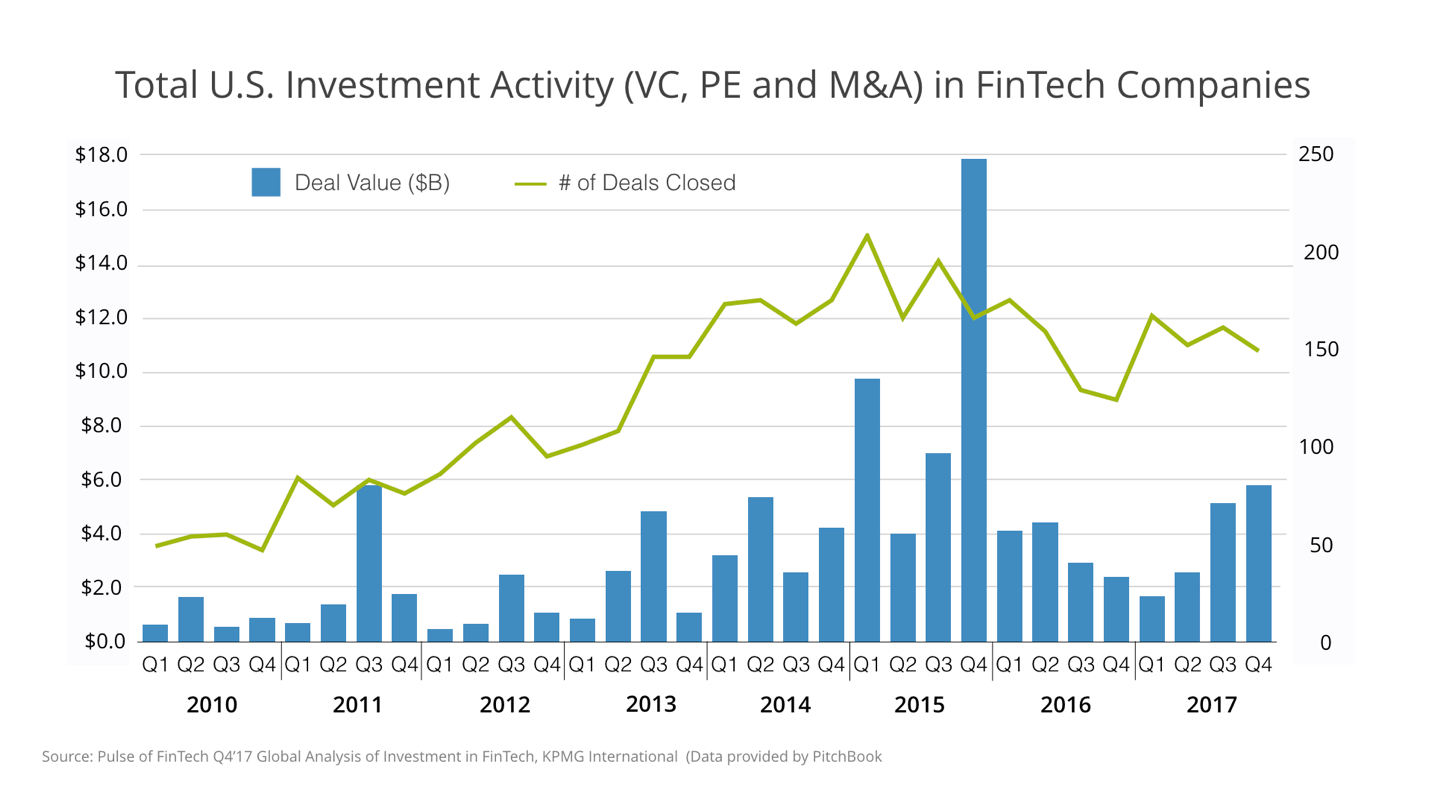 The fact that the value of new investments flowing into FinTech companies has come down considerably since 2015 while the overall number of new deals has remained stable reflects a decrease in FinTech company valuations that corresponds to the shift in industry mentality from disruption to partnership. In the FinTech industry’s early years, after the financial crisis, there was considerable optimism that FinTech would transform financial services the way Amazon transformed retail or Uber transformed transportation. This optimism was aided by buzzwords like blockchain, which was promoted as a revolutionary new technology that would fundamentally alter the finance industry and eventually the entire economy, but which few people actually understood. This hype and optimism led to a flood of new money pouring into the FinTech industry as we just saw. But when many of these freshly funded FinTech companies failed to deliver the hoped for results, investor sentiment returned to more realistic levels and new investment activity cooled off. This has led many to argue that the FinTech industry is going through the hype cycle, a term coined by the consulting firm Gartner, to reflect the maturity and adoption of new technologies. The hype cycle [see figure 1.4] is a visual representation of the fact that we tend to overestimate the effect of a new technology in the short run and underestimate the effect in the long run. Thus, according to hype cycle terminology, 2015 may have been the peak of inflated expectations for the FinTech industry. While it is hard to say with certainty where we’re currently at in the hype cycle, it is fair to assume that in the long-run, FinTech will prove to be a disruptive force in all aspects of finance. 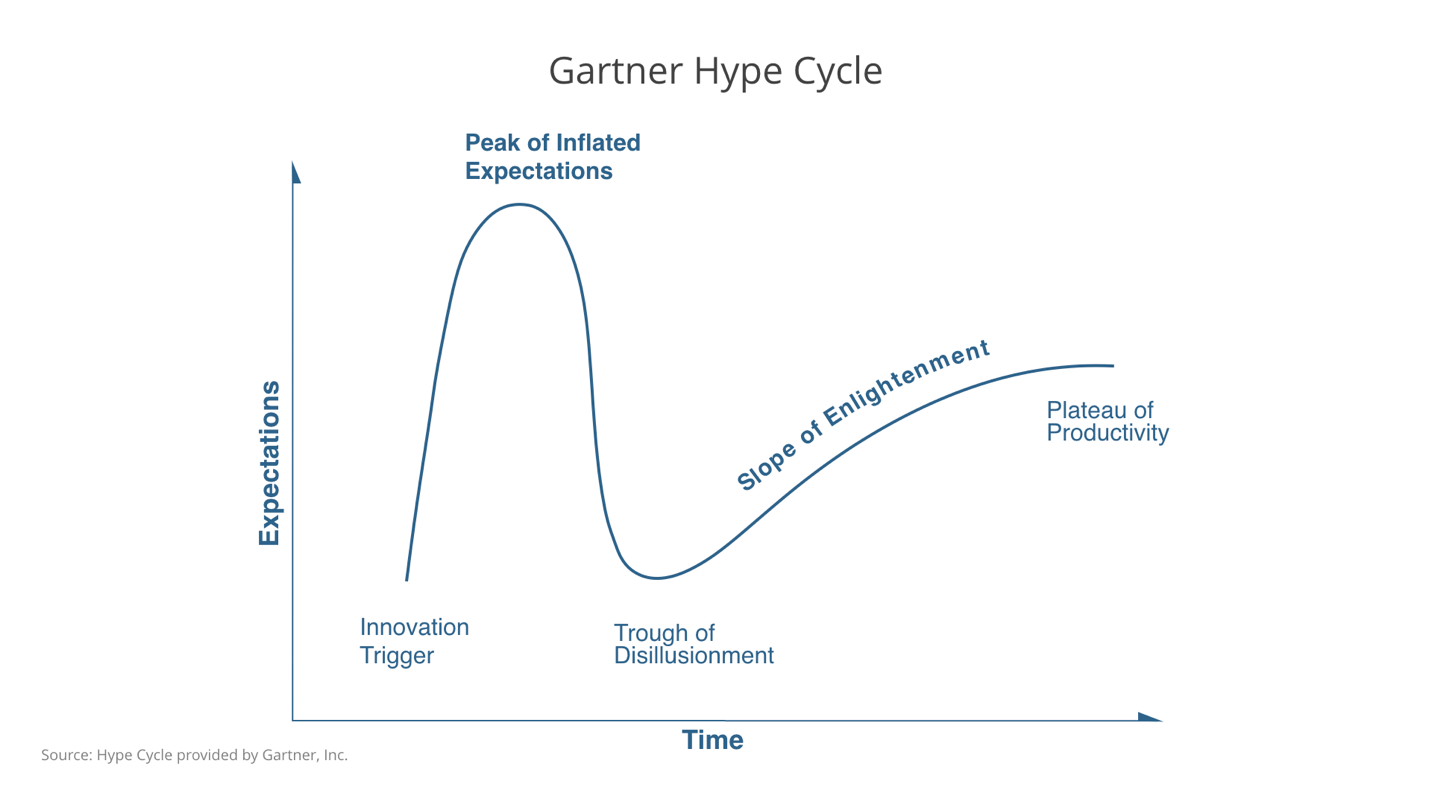 One thought on “Evolution of the FinTech Industry: From Disruption to Partnership”