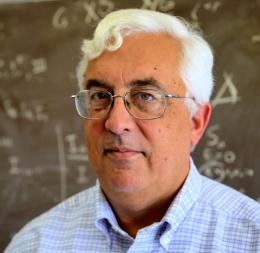 Originally trained in algebraic geometry, Morrison’s work turned towards the interaction between string theory and mathematics after the discovery by physicists of new properties of some of the mathematical objects he was most familiar with.  In recent years, he has used sophisticated mathematical tools to explore the four-dimensional physical theories which can be described using string theory and its cousins, M-theory and F-theory.  Manifolds with special holonomy have played an important role in these studies, and Morrison looks forward to learning more about the less-explored cases of holonomy

and Spin(7) and applying this knowledge to questions in physics.