How does a cell form a furrow without an actomyosin ring?

Most eukaryotic cells divide by forming a cleavage furrow.  According to the textbook model, the force for furrowing should be provided by the contractile actomyosin ring.  However, a wide range of eukaryotes don’t have this ring, suggesting that there is an evolutionarily ancient, ring-independent mechanism for furrowing.

We use the model green alga Chlamydomonas reinhardtii, which has no actomyosin ring yet divides by furrowing, as a model to understand how a cell without an actomyosin ring can form a cleavage furrow and to gain insights into the evolution of division mechanisms in a diverse range of eukaryotes from their common ancestor.

Specific questions include, but are not limited to, the following:

(1) Does F-actin have a myosin-independent role in cytokinesis?

(2) What does the microtubule-based structure “phycoplast” do to drive furrow ingression?

(3) Are the single septin protein and the ESCRT system involved in cytokinesis?

(4) Do membrane trafficking and extracellular matrix contribute to furrowing?

(5) Most importantly, we will use Chlamydomonas to identify novel and universal cytokinesis genes, whose roles may have been obscured in animals and fungi by the prominent actomyosin ring.

We use genetics (forward and reverse), genomics, cell biology, etc. to answer these questions.

Naturally, we don’t expect everything involved in cytokinesis in Chlamydomonas  to have a role in animal cell division, or vice versa.  Through our work, we anticipate to established a minimal parts list of cleavage-furrow ingression, and understand the roles of the accessory modules that have evolved in different lineages (e.g., myosin-II), which make the diverse organisms unique in their own ways.

Diverse eukaryotes, many divide by cleavage-furrow ingression without myosin II

We know very well that animal cells divide by centripetal ingression of the cleavage furrow, which is aided by the contractile actomyosin ring.  Fungi (like yeast) and amoebae (e.g., Dictyostelium) also employ this mode of division.  On the other hand, we also know very well that plants divide by centrifugal expansion of the cell plate, which is made by fusion of vesicles delivered by phragmoplast-mediated trafficking and local synthesis / deposition of cell wall materials. The two mechanisms look so different on the surface, but they have evolved from the same basal mechanism that the last eukaryotic common ancestor (LECA) had.  So, how did the LECA divide? 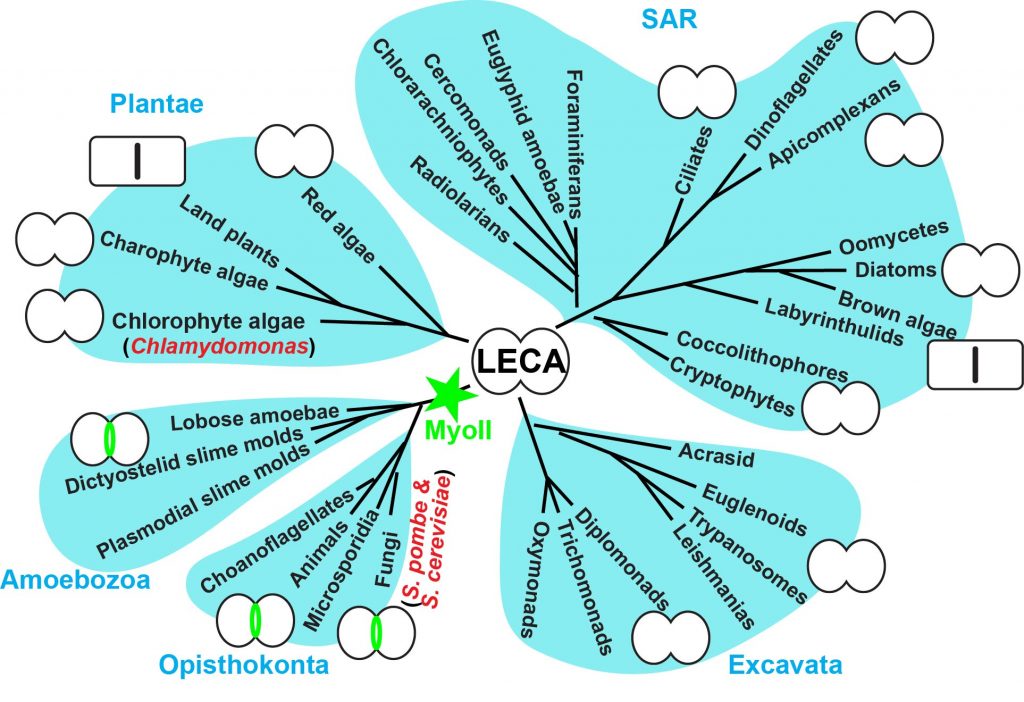 Available information in the literature clearly indicates that cleavage-furrow ingression is widespread across the tree of eukaryotes (with exceptions in plants and some brown algae), suggesting that it is the basal mechanism of cytokinesis.  Surprisingly, however, the myosin-II gene, which is essential for the contractile actomyosin ring (at least in the canonical model), is conserved only in Opisthokonta (animals, fungi, etc.) and Amoebozoa, with a curious exception in Naegleria.  Thus, the LECA must have divided by furrowing, but without a contractile ring. 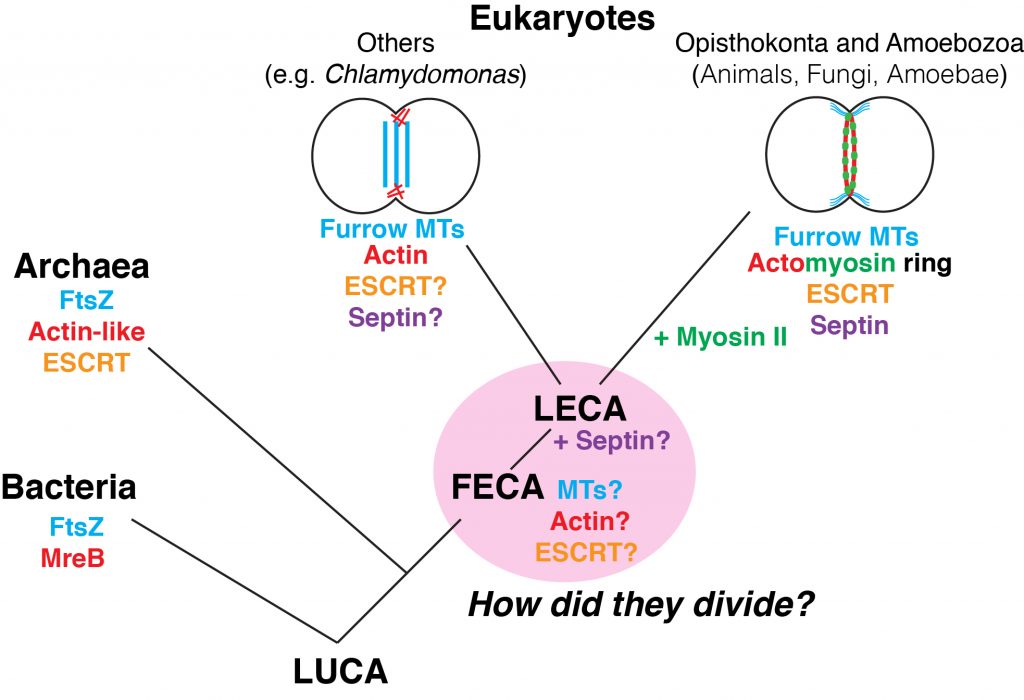 Another approach to the LECA is from the prokaryotic side of evolution. Both bacteria and archaea divide by furrowing, and actin-like proteins, tubulin-like FtsZ proteins, ESCRT proteins, and cell-wall synthesis have been implicated in the furrowing mechanism.

Is furrowing without actomyosin ring relevant to us?

It is clear that the contractile actomyosin ring was not the primary force-generating machinery for furrowing when it emerged in a cell, because the immediate progenitor of such cell could form a furrow without it.  To understand the true evolutionary advantage of the actomyosin ring, it is essential to know what a cell without it can and cannot do.

In budding yeast, it has been shown that the contractile force generated by myosin-II is not required for furrow ingression.  Instead, vesicle trafficking delivers enzymes that locally synthesize extracellular polysaccharides, which push the membrane from outside.  While the actomyosin system plays an important role in improving the efficiency and fidelity of furrowing, it is not the primary driver.  Similarly, in fission yeast, it has been shown that once furrowing has initiated, pharmacological removal of F-actin does not stop the ingression.

Even in some animals, dispensability of myosin II (or its activity) has been reported in many cell types.  Alternative models for furrow ingression have been proposed and are being tested.