Outer-membrane vesicles (OMVs) are extracellular spherical membrane buds filled with periplasmic content that are commonly produced by Gram-negative bacteria. The production of OMVs allows bacteria to interact with their environment and to mediate diverse functions, including promoting pathogenesis, enabling bacterial survival during stress conditions, and regulating microbial interactions within bacterial communities. Because of this unique functional versatility, researchers have begun exploring OMVs as a platform for bioengineering applications.

In the past 20 years, we and researchers around the world have revealed the ability of microbial and host cell communities to produce, regulate, and functionally utilize outer membrane vesicles (OMVs) as a means to survive and interact with their cellular and acellular environments. OMVs have been studied in relation to bacterial pathogenesis in environments including planktonic cultures, fresh and saltwater, within biofilms, inside eukaryotic cells, and within mammalian hosts.  Extracellular vesicle production accomplishes a variety of functions for bacteria, including cellular communication, surface modifications, and the elimination of undesired components.

Using genetic and biochemical analyses, we and others have begun to elucidate the mechanistic aspects of OMV production by non-pathogenic bacteria. We’ve found that vesicle production is an environmentally controlled and specific secretion process.  So far, it has been challenging to discover the principles that govern the fundamentals of vesicle‐mediated transport. Namely, there does not appear to be a single mechanism modulating OMV export, nor universal “markers” for OMV cargo, nor particular host cell interactions or responses common to treatment with all OMVs. This is hardly surprising, given the diversity of species studied, their differences in envelope architecture and composition, the diversity of environmentally regulated bacterial processes, and the variety of interactions between bacteria and their abiotic and biotic environments. Nevertheless, the bacteria’s ability to control exported material in the context of a packaged insoluble particle, namely a vesicle, is emerging as a significant contribution to bacterial viability, biofilm communities, and bacterial‐host interactions and can be exploited for improving our health and that of our environment. 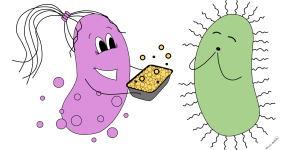 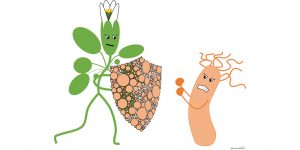 They are like little messengers that occasionally want to share good things, that can help defend their neighbors, or that can cause the destruction of other cells. 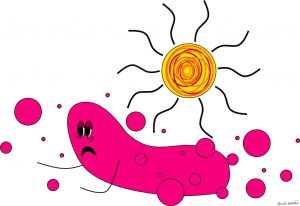 Crucial to the development of better antibiotics and antimicrobial therapies, the Kuehn Lab’s research helps us understand the bacterial secretory processes during the stressful act of infecting humans.

One of our projects focuses on the role of outer membrane vesicles (OMVs) produced by the gram-negative bacterium, enterotoxigenic E. coli (ETEC), a major cause of children’s diarrhea in underdeveloped countries. OMVs are extensions of the bacteria’s outer membrane and are known for their multiple functions such as microbial survival, nutrient acquisition, and toxin delivery to cells or neighboring microbes. The Kuehn lab wants to understand how ETEC produces and utilizes OMVs upon physiological stress.

The Kuehn Lab wants to know how OMV-carried cargo influences bacterial biofilms, and how this activity gives us insight into highly antibiotic-resistant and persistent stages of bacterial colonization that occur in chronic human infections.

P. aeruginosa is a devastating pathogen that can afflict cystic fibrosis patients and burn or deep wound victims. It’s an opportunistic pathogen that forms highly impenetrable biofilms, thus causing long-term infections in tissues, despite antibiotic treatment. OMVs are known to be a component of bacterial biofilms, but their role, and the roles of particular OMV-associated factors, in the build-up and break-down of biofilms, has not been well-characterized.