Transient receptor potential (TRP) channels play a multitude of important physiological roles in humans, including temperature sensing. Since their discovery in 1990s, much effort has been directed towards elucidating the molecular mechanisms that allow TRP channels to fulfil their physiological functions. Since 2016, when we reported the first single particle cryo-electron microscopy (cryo-EM) structure of the heat-sensitive TRPV2 channel (Nat Struc Mol Biol 2016), we have aimed to dissect the design principles of temperature-sensitive TRP channels through rigorous structural and functional studies.

TRP Channels and the Perception of Hot and Cold

Within the TRP channel superfamily, the transient receptor melastatin (TRPM) subfamily, defined by its unique N-terminal Melastatin Homology Regions (MHRs), is composed of eight members, TRPM1 to TRPM8. They are involved in diverse physiological pathways, such as temperature sensation, regulation of ion homeostasis, and redox sensation.

TRPM8: The human sensor for cold and menthol 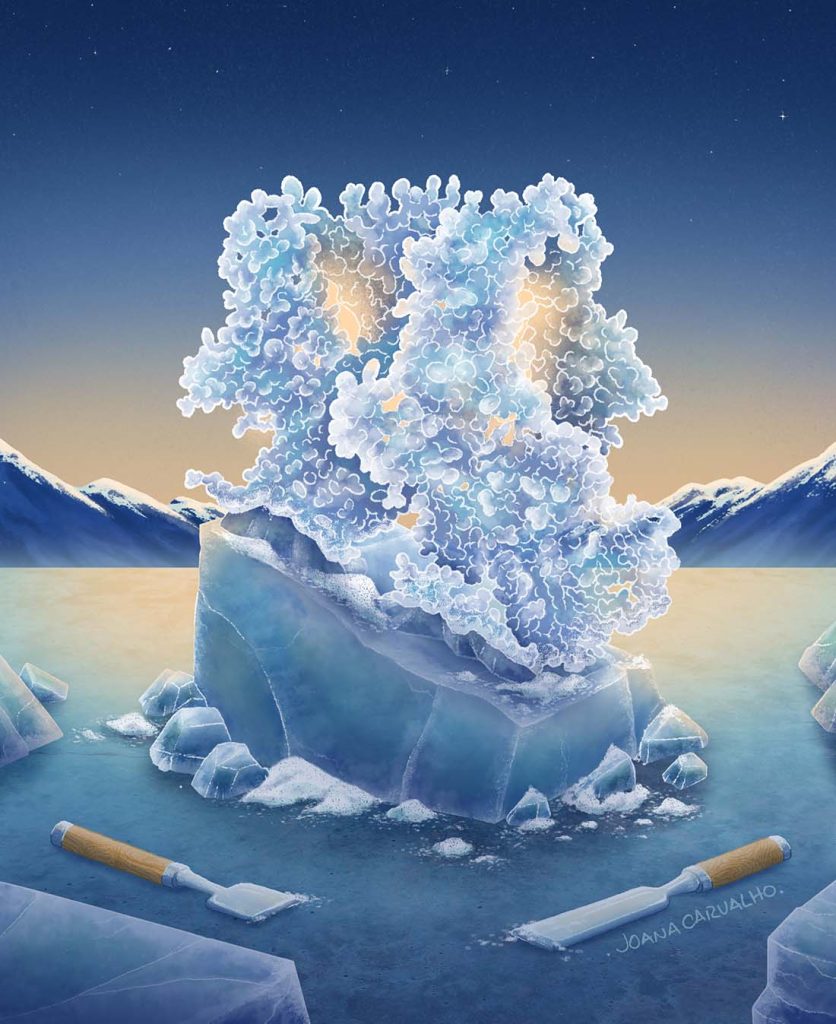 The concept of sculpting ice refers not only the cold sensation by this receptor, but also the process of discovering how this complex structure works. Illustration by Joana C. Carvalho.

In 2017, the Lee Lab reported the first cryo-EM structure of a full-length TRPM8, the long-sought-after cold and menthol sensor in humans in collaboration with the Lander lab at TSRI (Science 2017). Following the initial determination of the channel architecture, we investigated the molecular mechanisms of TRPM8 gating by which the channel is activated by various ligand modulators, including cooling agents such as menthol and icilin and membrane lipid phosphatidylinositol 4,5-bisphosphate [PI(4,5)P2]. A unique feature of TRPM8 is that the channel activation requires PI(4,5)P2, which allosterically enhances the potency of cooling agents on channel activity. Using the Titan Krios cryo-EM at Duke, we independently determined two cryo-EM structures of TRPM8 complex structures: TRPM8-icilin-Ca2+-PI(4,5)P2 and TRPM8-WS12 (menthol analog)-PI(4,5)P2 (Science 2019). Our study revealed that the binding pocket for cooling agents is located at the voltage-sensor-like domain (VSLD) cavity and that PI(4,5)P2 binds to a previously unobserved membrane interfacial cavity assembled by key subdomains at an inter-layer nexus. These results provided a structural explanation for the allosteric coupling between PI(4,5)P2 and cooling agents, as well as a framework to understand the molecular basis for TRPM8 gating.

Recently, we successfully captured the mouse TRPM8 structures in closed, intermediate, and open states using PI(4,5)P2 and type I and type II agonists, illuminating the structural basis of PI(4,5)P2– and cooling agonist-dependent channel activation (Science 2022). Combined with electrophysiology and molecular dynamics (Im group, Lehigh University), we showed how the structural rearrangements propagate from the small local changes triggered by ligand binding to opening of the channel pore domain. Notably, the pore undergoes non-canonical structural changes during gating—the pore cavity volume size is progressively reduced, the pore helices constrict, the selectivity filter gradually forms, and the electrostatic potential of the pore-lining surface becomes more electronegative. These phenomena all together facilitate ion permeation. Our study revealed a coil-to-helix C-terminal transition and helical transition and rotation in the pore-forming S6 helix, which concomitantly enable the dynamics in the S6 gate positions along the gating pathway.

The cryo-EM structure of mouse TRPM8 in complex with the cooling agent C3, AITC, and PI(4,5)P2 in the open state conformation. Our study reveals the dynamics in the S6 gate positions and provided molecular basis for PI(4,5)P2- and cooling agonist-dependent of TRPM8 activation.

TRPM2 plays a key role in redox sensation in many different cell types. In addition, it is responsible for sensing warm temperatures and regulating body temperature in humans. TRPM2 interacts with the endogenous agonist ADP-ribose (ADPR) as well as Ca2+ ions, both of which are required for channel activation.

In our recent work (Nat Comms 2019), we aimed to delineate how binding of ADPR and Ca2+ ions, respectively, contribute to channel activation. Using cryo-EM we solved structures of the apo TRPM2, TRPM2 bound to Ca2+, and TRPM2 bound to ADPR and Ca2+. Interestingly, we found that TRPM2 transitions through two-fold (C2) symmetric intermediate states to accommodate substantial conformational rearrangements during ligand-dependent channel activation. In the apo form, the channel assumes an almost completely four-fold (C4) symmetry. However, the addition of Ca2+ or ADPR/Ca2+ induces distinct C2 symmetric conformations in the homo-tetrameric channel. We propose that TRPM2 possesses intrinsic flexibility that enables it to enter two-fold symmetric intermediates which reduce the energetic barrier going from the closed to open state. We are presently conducting cryo-EM studies to map out the gating cycle of TRPM2 in more detail.

Transient receptor potential vanilloid (TRPV) channels comprise TRPV subtypes 1 to 6. However, only subtypes TRPV1 to TRPV4 can be opened by elevated temperatures. These have therefore been termed thermo-TRPV channels. Because of our interest in temperature sensing and calcium permeation, the thermo-TRPV channels have become a large part of the research focus in the Lee lab. 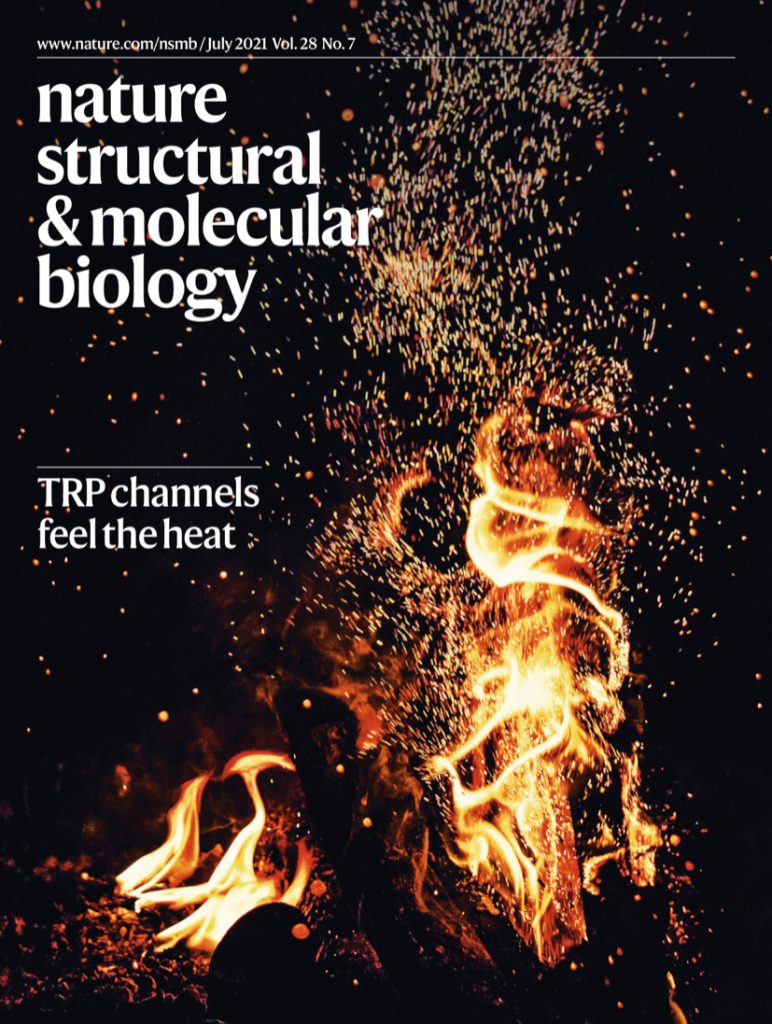 Our study of heat-induced activation of TRPV1 was featured on the cover of Nat Struc Mol Biol Volume 28 Issue 7, July 2021.

Transient receptor potential vanilloid member 1 (TRPV1) is a Ca2+-permeable cation channel that serves as the primary sensor in humans for noxious heat (> 48°C) and vanilloid compounds, such as capsaicin from chili peppers. In 2020, using cryo-EM and electrophysiology, we elucidated the molecular mechanism of heat-dependent TRPV1 gating (Nat Struc Mol Biol 2020). We captured the first heat-induced, open-state TRPV1 structure in the presence of capsaicin and revealed stepwise conformational transitions towards channel opening. The first transition induces global domain rearrangements and primes the channel for opening. In contrast, the second transition involves the coupled rearrangement of the outer pore and the interface between S6 and the S4-S5 linker leading to pore opening. Our studies showed that changes in heat capacity contribute to TRPV1 heat sensing and, for the first time, identified a network of residues that are directly involved in heat sensing. In a follow-up study, we developed a thermal titration based cryo-EM ensemble analysis method and achieved temporal resolution of the conformational trajectory of TRPV1 gating by the ultrapotent vanilloid resiniferatoxin (RTx) (Nat Comms 2021). Our study demonstrated that RTx binding to TRPV1 induces the intracellular gate opening first, followed by selectivity filter dilation, then pore loop rearrangement to reach the final open state. 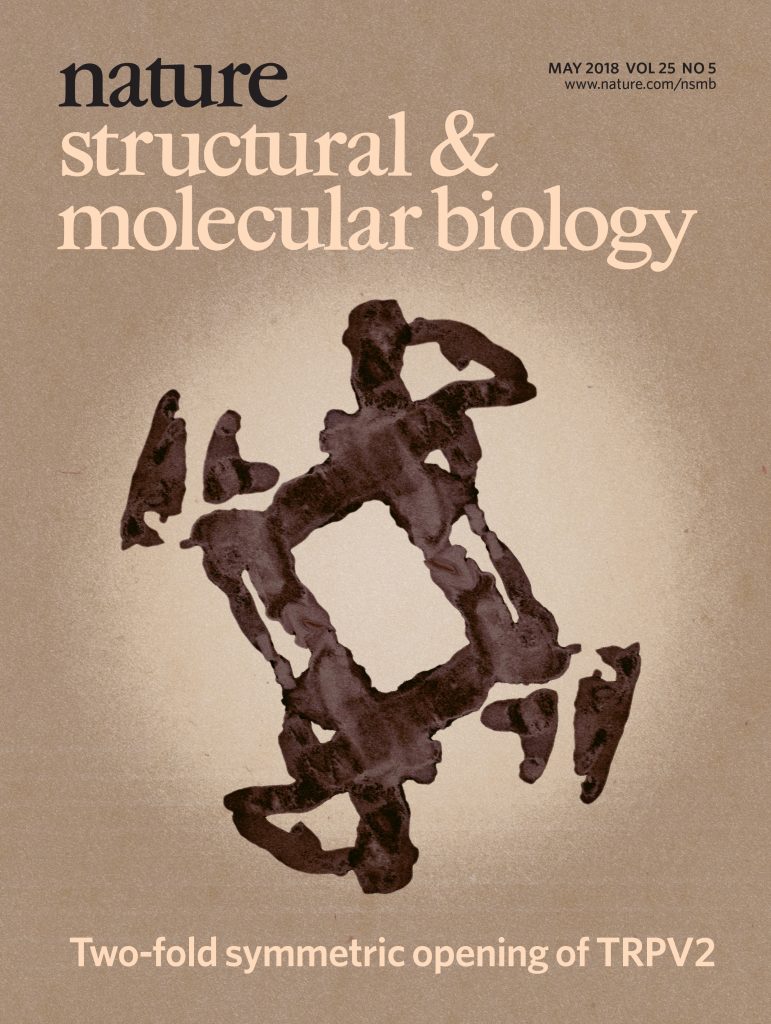 Our study of two-fold symmetric opening of TRPV2 was featured on the cover of Nat Struc Mol Biol Volume 25 Issue 5, May 2018.

TRPV2 is a Ca2+-permeable channel that is activated by temperatures ≥ 52 °C. Our first structural study of TRPV2 (Nat Struc Mol Biol 2016) predicted that the channel would undergo secondary structure transitions in the key transmembrane helices upon opening—from low-energy α-helix to high-energy π-helical motifs—and that these transient non-α-helical motifs are important for channel gating. In 2018, we published a follow-up study to visualize the opening of the channel where we crystallized TRPV2 in Ca2+ and ligand/Ca2+-bound conformations (Nat Struc Mol Biol 2018). Our results showed that the selectivity filter gate of TRPV2 assumes a highly unusual two-fold symmetric conformation upon opening. We showed that this conformation is relevant for large organic cation permeation, and that it is achieved through the rotation of subunits around π-helical hinges that appear at strategically important junctions in the transmembrane domains. This study highlights the importance of the non-α-helical elements, π- and 310 –helices, and illustrates the difference in design of static and dynamic regions between TRPV channels and their better-understood relatives, potassium selective voltage-gated ion channels (KV). In a follow-up study, we further investigated the symmetry transitions in TRPV2 during gating using the Titan Krios cryo-EM at Duke. The results of this study showed that TRPV2 preferentially enters two-fold symmetric conformations during gating in lipid membranes (eLife 2019). 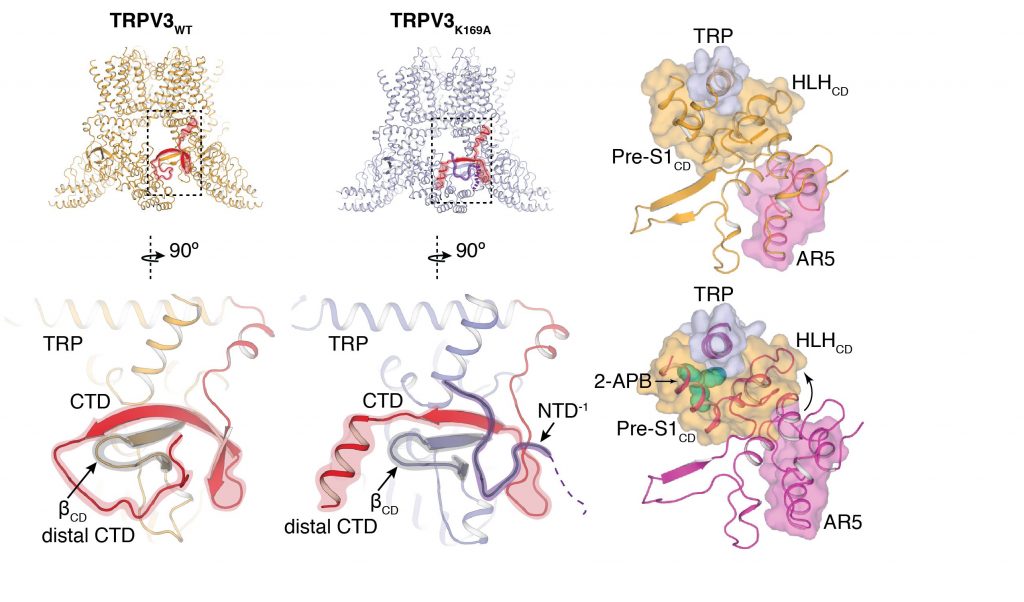 The cytoplasmic inter-protomer interface of TRPV3 plays a critical role in the channel sensitization. The distal CTD undergoes a coil-to-helix transition upon sensitization, which enhances the coupling between the cytoplasmic domain and the TRP domain.

TRPV3 is closely related to TRPV2 and other thermo-TRPV channels. It is involved in the maintenance of skin and hair homeostasis and is activated by warm temperatures (≥ 32 °C). TRPV3 undergoes sensitization upon repeated exposure to ligands or heat. This is in contrast to most other TRP channels which rapidly desensitize upon activation. To dissect the structural determinants of sensitization, we solved the structures of the apo and sensitized human TRPV3 channel (Nat Comms 2018) and found that the S6 helix undergoes a secondary structure transition from α-helix to π-helix upon sensitization. The π-helix enables the S6 helix to bend and open, and the α-to-π transition contributes to lowering of the activation energy during sensitization. Furthermore, in a follow-up study using the Titan Krios cryo-EM at Duke, we found that the C-terminal domain (CTD) of TRPV3 also plays a critical role in the sensitization of the channel (eLife 2019). In the apo conformation of TRPV3, the CTD adopts a coil conformation which undergoes a coil-to-helix transition upon sensitization that facilitates the coupling between the cytoplasmic and transmembrane domains. Indeed, mutations that stabilize the helical CTD produce a TRPV3 channel that is sensitized from the outset.

TRPA1 is the receptor of many pungent chemicals including those found in wasabi, cinnamon and garlic. The overall structure of TRPA1 (left) and a close-up view of the electrophile irritant binding site (right).

Transient Receptor Potential Ankyrin 1 (TRPA1) is a Ca2+-permeable channel acting as one of the primary sensors of environmental irritants and noxious substances, including wasabi, cinnamon, garlic, and mustard. Evidence also shows it might be sensitive to temperature in humans and mice. By utilizing cryo-electron microscopy and electrophysiology, we reported three high-resolution structures of the human TRPA1 channel, and proposed a model for the mechanism of promiscuous electrophile sensing by the highly reactive cysteine residue C621 (Neuron 2020). Our work provides a platform for future drug development of TRPA1.

The Lee Lab also researches organellar Ca2+ ion channels that regulate the flow of Ca2+ into mitochondria and lysosomes—a function critical for cell function and survival.

Transient receptor potential mucolipin (TRPML) channels are a subfamily of the TRP family cation channels. They are the major Ca2+ permeable channels localized in late endosomes and lysosomes (LEL) and regulate Ca2+ release from those organelles, which is crucial for signal transduction and organelle trafficking. It has been shown that TRPML channels can be activated by a low abundance, LEL-localized lipid, phosphatidylinositol 3,5-bisphosphate [PI(3,5)P2], whereas the plasma membrane lipid, PI(4,5)P2, inhibits channel activity.

To understand the mechanism of lipid-dependent channel gating, we reported the first single particle cryo-EM structure of a TRPML3 channel from Callithrix jaccus determined to 2.9 Å (Nature 2017). Together with electrophysiology and isothermal titration calorimetry (ITC), we showed that a cytosolic domain—which we term the mucolipin domain—is responsible for the binding of PI(3,5)P2 and the lipid-dependent channel opening.