Five Years Later, Does Ultron Hold up as a Worthy MCU Villain?

Margot Robbie is back in action as one of cinema’s most badass antiheroes. 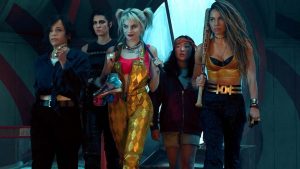 If there is one defining feature of the DC Comics character Harley Quinn, it would be that she is impossible to define. She is unhinged and violent, but also charming and powerful. It would be no surprise to see that Birds of Prey and the Fantabulous Emancipation of One Harley Quinn (2020), a movie centered around Quinn, would share the same features. In the film, Quinn (Margot Robbie) breaks up with her boyfriend, the Joker (Jared Leto), and becomes the target of Gotham crime boss Roman Sionis (Ewan McGregor). To protect herself and a mysterious girl named Cassandra Cain (Ella Jay Basco), Quinn teams up with Black Canary (Jurnee Smollett-Bell), Huntress (Mary Elizabeth Winstead) and Renee Montoya (Rosie Perez).

Make no mistake, Birds of Prey, despite naming itself after the superheroine ensemble, is a Harley Quinn movie. Robbie’s Quinn carries the narrative and emotional weight of the film, becoming its biggest, sometimes sole, highlight. Robbie continues her charismatic performance as Quinn, diving deeper into her character and offering audiences a fresh perspective on her. However, other characters, such as Black Canary and Huntress, are often overshadowed by the film’s heavy focus on Quinn, resulting in an imbalance of character development. McGregor portrays an interesting yet subversive interpretation of Sionis, also known as Black Mask, one of the most famous Batman villains. Sionis is brutal, unstable, and deeply misogynistic, becoming the epitome of toxic masculinity and the patriarchy. Known for playing hero characters such as Obi-Wan Kenobi in the Star Wars prequels, McGregor’s villainous turn in Birds of Prey proves to be convincing and successful.

Birds of Prey has an unconventional plot structure, constantly jumping forward and backward in time rather than having a linear narrative flow. The film’s messy plotlines can be distracting and frustrating, as it is sometimes tiresome to follow the film’s supposedly simple story. Similarly, the film can be tonally inconsistent, switching from violent and gritty scenes with Sionis back to delightful scenes with Quinn within a matter of seconds. Although some may hope that the film took a more straight-forward approach, the narrative and tonal inconsistencies are purposeful as they reflect who Quinn is: unpredictable and arbitrary. These elements, coupled with Birds of Prey’s eye-popping colors and visuals, fast-paced action sequences from John Wick (2014)’s Chad Stahelski, and rock ‘n roll soundtrack make the film a unique superhero adventure that is welcomingly different than most of the DC canon.

Birds of Prey — with a crew consisting of mostly women led by a Chinese-American director — challenges the patriarchy and sends a strong feminist message. While Sionis displays the danger of the patriarchy, Quinn’s newfound independence from the Joker confronts misogyny. Furthermore, after female-centered superhero movies such as Wonder Woman (2017) and Captain Marvel (2019), Birds of Prey once again puts female heroes front and center, beginning a new age of movies centered around female heroes, including this year’s Mulan, Black Widow, Wonder Woman 1984, and The Eternals.

Overall, Birds of Prey is fresh, entertaining, and powerful. Although Birds of Prey is not perfect, it offers plenty of superhero fun while delivering a strong message that makes it another win for DC, Warner Bros, and comic books fans.