Five Years Later, Does Ultron Hold up as a Worthy MCU Villain?

To celebrate James Spader’s 60th birthday, we’re taking a look at how well one of his most famous roles has aged over the years. 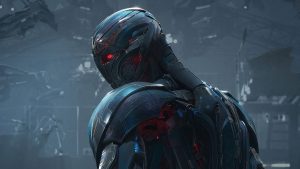 To many, Spader is best known for his portrayals of eccentric characters in movies such as Sex, Lies and Videotape (1989), Crash (2004), and The Blacklist (2013 – ). However, to more casual fans, he is best known for playing the fictional supervillain Ultron in the 2015 blockbuster Avengers: Age of Ultron. To celebrate Spader’s birthday, we look back at Ultron and see how the character has held up almost 5 years after the movie’s release.

Similar to Robert Downey Jr’s Iron Man, Ultron was written to somewhat adhere to Spader’s personality and most famous roles. In the movie, Ultron is a self-obsessed and eccentric artificial intelligence robot who seeks human extinction. Thanks to motion-capture and visual effects, Ultron captures Spader’s unique demeanor, from his facial expressions to his unmistakable body movements. Ultron’s personality, in addition to Spader’s charismatic performance, sets Ultron apart from other Marvel villains and garnered praise from both critics and audiences alike.

Although he is unique and charming, Ultron is underutilized in Age of Ultron. As a vital transition between one storyline to the next in a complex franchise, Age of Ultron is burdened with multiple tasks, including ending a storyline, setting up the next one, and introducing new characters. The movie’s 2 hour and 22 minute runtime was not enough to adequately address everything, so it sacrificed Ultron’s screen time and character development. Because the audiences were not given enough time to understand Ultron’s motivations, he seemed more like a conventional CGI supervillain with a twist than a convincing character. Ultron spent most of his screen time cracking jokes and making religious allusions rather than being a threat to our heroes, leaving audiences — especially fans of the comics — desiring more.

After Age of Ultron’s release, Ultron was constantly compared to the antagonist of the previous Avengers film — Tom Hiddleston’s Loki, with most agreeing that Ultron was the weaker villain despite Spader’s spectacular performance. Ultron’s popularity died down even more after the release of Avengers: Infinity War, where Josh Brolin portrayed a much more nuanced and threatening villain with better visual effects: Thanos. Just as Age of Ultron is not most people’s favorite Avengers film, Ultron is not often thought of as the premier antagonist in the Avengers series.

That being said, Ultron still has a loyal fan base to this day, with many expressing their appreciation for him, and even writing articles explaining why he is the best Marvel movie villain. While most of Marvel’s villains being one-dimensional with an exception of notable few, Ultron stood out from the rest of the pack. Audiences might not remember him that well in the grand scheme of the MCU, but they certainly have not forgotten him. Although the constraints of the story prevented Ultron from reaching his full potential, Spader’s performance still did him enough justice to make fans eager to see him return in future movies.