I had the pleasure of checking out a local production studio called Dynamic Video Group. For the Academic Media Production Team, this will be a great resource to point folks towards who don’t fall under our typical purview or availability.

Their “studio | space” model allows clients to book by the hour. Selecting from a variety of backgrounds (green screen, white, brick, etc), the client can show up with a script and/or slides in hand and work with a studio manager to record on one or more 4K cameras. The studio is equipped with a teleprompter, screen capture options, and soon a lightboard. They can also facilitate live-streaming for recording high quality remote interviews over Zoom etc. The studio can bring on freelance editors if needed, but most of their clients prefer to get the raw recorded files and handle on their end. Similarly, they’re in touch with graphic designers,  and make-up folks should the need arise. Overall, seemed pretty flexible and adaptable to whatever you could throw at them.

With the pandemic, they’re shifting a lot of focus to virtual events, which is reflected in their virtual event studio model. Essentially, it’s an upscale zoom room where they can bring up the grid of participants, display the chat, spotlight guests on a dedicated monitor, etc. This all runs into a control room on site where they can moderate the stream, live switch between cameras, and provide technical support. Their new HybridLink model will even allow them to bring up to 4 cameras on location and send the signal back to their studio control room, bypassing the need for a mobile control room setup.

If you have any questions or plan to work with Dynamic, please get in touch with us at oit-mt-info@duke.edu.

And as personally demoed here (cheesy bgs are built-in to FCP):

Of the various features, it’s probably about 50/50 stuff we in the Media Production team might actually use. The most valuable elements I found are the Compound Callouts which use arrows, boxes, and text to diagram information. They have a clean animation style and would work well for an instructor who didn’t have Keynote slides. It has a bunch of built-in shapes, similar to Camtasia, that can be helpful in creating quick pop-up graphics and annotations.

There’s also a couple of magnify filters which would work well with displaying a high-res photo or graphic and wanted to focus in on a small section.

One proposed use case was working with the lightboard. In one video, the instructor drew on the glass but her pen did not leave a mark. Our producer Brandon did an incredible job of making it look like she really drew what he added in post (jump to 13:40):

I didn’t even realize that clip had been animated. These callouts are better suited for something that’s not as subtle. Something similar could be achieved with a little creative editing, but there’s not much control for timing the animation or shaping the line to match something that specific. You could theoretically modify them in Motion, but that seems contradictory to using them for their convenience. Maybe they’re still worth getting as animations to build upon.

All in all, there’s a ton of options for customizing style and you can keyframe just about any attribute you can imagine. Personally, it seems a little light for $60 but I think one could make good use of them in the right contexts.

This great project will give a low tech method for people with traditional whiteboard learning modules to present them in a more camera friendly way for lecture capture or production.  The concept is simple, a large piece of glass is placed between the presenter and the camera who writes on it with a day-glow marker.  The video is mirrored so the text appears correctly to the viewer.  The result is a presentation where the lecturer can visually explain the lesson without turning their back to the learners or blocking the writing with their body. That’s the simple concept.  In actuality the engineering was more difficult and we had several project goals and improvements we wanted to make over the original Peshkin model:

We made several simple improvements to accomplish our goals.  The structure was built entirely of 80/20 extruded aluminum making it light weight and simple to build while being easily sourced through online retailers.  We opted for an electronic solution to mirroring the camera versus using physical mirrors.  The system uses high quality casters making it easy to move.  The height of the design was also a factor as it needed to fit through a standard commercial door.  We avoided the temptation to at every turn to involve more complicated components and processes for the sake of simplicity. Regarding our lighting and deploy-ability.  We are operating on the assumption that most universities have access to a 3D Printer at this point.  Components that utilized custom designs have been published in formats that are easily 3D printable.  The designs of those components are also easily fabricated with simple carpentry in any campus wood or scene shop.

The one stand out of the design is the LED mounting system.  We found that no such product existed on the market so we designed our own and consider it to be the center piece of this version.  We found that holding the LED’s directly to the glass was the key to using low cost LED strips and less power.  The further the light source is form the glass, the less illumination there is by orders of magnitude.  There is also light leakage.  The system we designed holds the LED strips precisely and directly to the glass leaving little light leakage and greatly improving the efficiency of the light transmission.  We also discovered that a key to the design was to have the space on the lecturer half of the board well lit while the camera side of the board remains as dark as possible.  Applying large studio lights to that goal makes traditional 3-point lighting difficult since the lecturer will be just two or three feet from the glass.  To overcome that problem we added additional tracks for more LED’s that can discretely but effectively and evenly illuminate the subject.  This also allows light tuning, the strips on the subject side can be tuned to 2700-3000K for skin tones while light penetrating the glass can be tuned to 6000K to better illuminate the markers.  The result of the LED Clip greatly reduces the need for additional studio fixtures. We have done diligence documenting the build process and hope this can assist other institutions in constructing their own!  https://wiki.duke.edu/display/LIG/Lightboard One of the challenges we’ve faced with the dLightboard is cleaning the neon Expo marker from the glass. Regular cleaners including Windex leave a haze as you can see above. We tried using Expo marker cleaner, but the smell was so incredibly bad, we’ve banned it from our lab and the first floor completely. Chip tried using a squeegee with water. That worked well, but created a mess and would preclude us from putting LEDs on the bottom. So we lined up a bunch of products to test looking for a de-greaser.

No, we didn’t try CoffeeMate.

The winner was… Dawn! Mixing Dawn in a spray bottle with water (about 1/3 Dawn + 2/3 Water) did really well. We’d spray it on a paper towel and then use a dry paper towel to dry it up. As you can see below, no more haze! Based on some AMAZING work being done at Northwestern University, Chip Bobbert from Duke’s ITS group partnered with the Duke Digital Initiative to build our own. We decided to first build a desktop prototype to work out construction challenges. That has proven to be a great approach as there were many.

Rather than welding parts, Chip used his experience with pre-fabricated aluminum parts from 80/20 to construct the frame for the piece. Billed as the “Industrial Erector Set” – the parts from this company really helped make this project achievable. Once the glass arrived, Chip realized that glass offsets that were commercially available would not do the trick. Since Chip also heads up DDI/ITS’ 3D printing project, he used that technology to create the offsets.

When it came time to mount the LED’s, Chip added a new feature of “self lighting”. A second set of LED’s were added to the original design which lit the glass edges to allow the neon Expo markers to illuminate. This second set was a warmer color temperature and was used to light the subject, eliminating the need for external lighting.  Dimmers were added to control both the edge light illumination and subject illumination.

The large version is still under construction. Challenges with the larger design and ordering parts will make this deliverable later this summer. Duke Media Services will take delivery of this and experiment ways in which they can provide this as a service to interested faculty and students. Once the project is completed, Chip will provide a complete set of parts and details on construction if other schools or departments want to create a light board on their own. 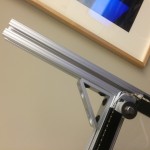 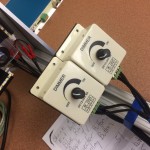 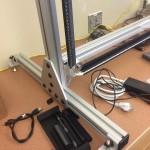 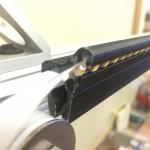 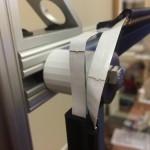