This conversation was led by Sid Thakur, Professor and Director of Global Health at the College of Veterinary Medicine at North Carolina State University. Antimicrobial resistance (AMR) to the critical class of antimicrobials has consistently gone up over the last decade and parallels antibiotic consumption in humans and animals. Many of the resistance mechanisms that were chromosomally associated (vertical transmission) are now plasmid-mediated, assisting in the rapid decimation of these AMR genes via horizontal transfer to susceptible bacterial populations. Despite recent policy changes and restricted antibiotic use in some countries, drug applications in human and animal populations, environmental contamination, and increased globalization continue to steer selection pressures and foster opportunities for horizontal gene transfer among AMR bacteria. We continue to see an increase in AMR, even in systems that are not exposed to antimicrobials. It is evident that the current model of tackling this global problem in separate silos of human medicine and animal industry has not worked, and we need a holistic approach like the One Health model to deal with it. As we constantly face new and emerging infections in a continually changing world, we need to embrace the principles of One Health to tackle the burgeoning challenge posed by AMR. 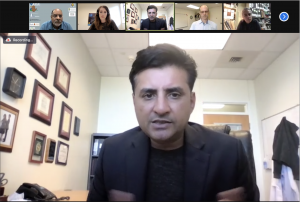