It’s not hard to see why people can be critical of fiction’s role in society. We spend a huge amount of time lost in stories, with the average American spending four hours per day watching television alone according to the A.C. Nielsen Co. Thus it is easy to see why critics argue fiction is mentally and ethically corrosive, creating a false reality. They believe fiction is dangerous because it has the power to modify the principles of individuals and whole societies. However, they seem to be overlooking fictions positive influence where stories cultivate our mental and moral development and that the negative impacts of fiction may not actually be a bad thing.

“The more deeply we are cast under a story’s spell, the more potent its influence. In fact, fiction seems to be more effective at changing beliefs than nonfiction, which is designed to persuade through argument and evidence. Studies show that when we read nonfiction, we read with our shields up. We are critical and skeptical. But when we are absorbed in a story, we drop our intellectual guard. We are moved emotionally.” – Jonathan Gottschall

Now let me tell you about a piece of fiction that positively shaped not only my homes’ narrative of the design of nature’s future, but is galvanizing a worldwide voyage of change. Moana.

Disregarding the issues of appropriation, misrepresentation, and cultural accuracy of the Disney film Moana in the South Pacific, the fictional movie has sparked movement. In the film, Moana’s overprotective father, the chief of a small island called Motunui,  says she can never sail beyond the reef. Which forms the official perimeter of her village’s outreach and imagination. In my mind, this represents the state of our current society, bounded by a perimeter, a set of boundaries or ideals that we are scared, informed, told, or molded not to venture from. However, unlike our reality, Moana succeeds him and sets sail to track down the shipwrecked demigod Maui. Moana must persuade Maui to return home with her, as the green island has succumbed to a dark plague that gradually turns it to black lava dust. Again thinking about the movie in context of our current society, the dark plague in the movie in a way could represent climate change, and Moana’s battle to persuade Maui can depict the challenge of changing our societies mindset to not only believe in climate change, but to go beyond our current boundary and create solutions for a better future. I know this may be a bit dramatic or a bit of a long shot, but it’s this type of thinking that fiction evokes.

Okay, tying this piece of fiction back to how it is shaping our future, is something people have begun to call the Moana-effect.

As the Hōkūleʻa (a voyaging canoe based out of Hawaiʻi) sailed home from her three year journey traveling over 60,000 nautical miles around the world, she was greeted with colorful welcome ceremonies and cultural exchanges. A few of those exchanges were inspired by Disney’s hit film Moana (the Moana effect). For example kids greeted her with songs from the movie such as “How Far I’ll Go.” Just as the Hōkūleʻas head navigator Nainoa Thompson did, lured by the call of the ocean, the character Moana, discovered her true passion for exploring, just like her ancestors. She eventually learns the lost art of wayfinding, which is sailing on the open ocean without the help of navigational tools, using nature’s indicators to find tiny islands in the vast ocean and she finds her true identity. In the end, Moana helps reconnect her people with their rich voyaging past. This is almost identical to Hōkūleʻas living legacy over the past 40 years. Her message is to Mālama Honua meaning to take care of our Island Earth.

Hōkūleʻa and Moana are taking traditional knowledge of wayfinding to find a new destination – a healthy ocean and island earth by inspiring kids to learn traditional wayfinding and to mālama honua. She leaves us with this message. “The planet that sustains us all is facing huge challenges, and every step in the right direction will make a positive difference. Everyone can be the navigator our earth needs. Every person on earth can help navigate us to a healthy future where our Island Earth is safe and thriving again. Stories of hope and local solutions that blend indigenous wisdom with other best practices can be found all over the world.  If we find and share those stories with each other, we can help chart a positive course for our planet.” – Polynesian Voyaging Society

I contend, fiction itself is a disruptive force, breaking up our own fictions about the world we live in and showing us new possibilities for the future. 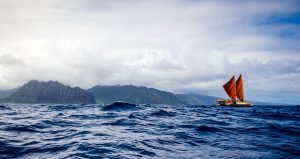 Photo Courtesy of The Office of Hawaiian Affairs 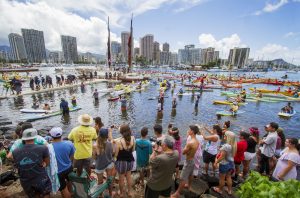