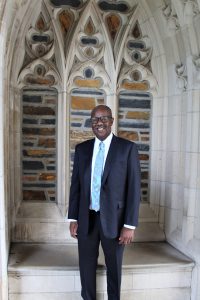 Kerry L. Haynie is Professor and Chair of Political Science, Professor of African and African American Studies, and a former Chair of Duke’s Academic Council (Faculty Senate), 2019-21. He earned B.A. and Ph.D. degrees from the University of North Carolina at Chapel Hill, and a Master’s degree from the Graduate School of Public and International Affairs at the University of Pittsburgh. Before coming to Duke in 2003, Haynie was a member of the faculty at Rutgers, The State University of New Jersey, and the University of Pennsylvania.

Haynie’s research examines how the underlying theory, structures, and practices of American political institutions affect African Americans’ and women’s efforts to organize and exert influence on the political system. In 2012, he and his co-author Beth Reingold were the co-winner of the American Political Science Association’s Women and Politics Research Section’s Best Paper Award. In addition to articles in various academic journals, his publications include, Race, Gender, and Legislative Representation: Toward a More Intersectional Approach (with Beth Reingold and Kirsten Widner, Oxford University Press) winner of the 2021 Richard F. Fenno, Jr. Prize from the American Political Science Association for the best book in legislative studies; New Race Politics in America: Understanding Minority and Immigrant Voting (co-edited with Jane Junn, Cambridge University Press); African American Legislators in the American States (Columbia University Press); The Encyclopedia of Minorities in American Politics, Volume I: African Americans and Asian Americans (Oryx Press); and The Encyclopedia of Minorities in American Politics, Volume II: Hispanic Americans and Native Americans (Oryx Press). He teaches undergraduate and graduate courses on African American politics, southern politics, urban politics, and comparative state politics and policy. Professor Haynie has traveled widely speaking on race and politics, including invited talks in France, Germany, and South Africa. He is a frequent contributor to various print and broadcast media outlets as a political analyst.

Professor Haynie has served as Associate Chair of the Department of Political Science (2006-09), and Director of Graduate Studies for Political Science (2004-06) and the Department of African and African American Studies (2017-18). He has been the faculty director of three undergraduate scholarship programs: the Mellon Mays Undergraduate Fellowship Program (2007-17), the Alumni Endowed Merit Scholarship (2015-present), and the Trinity Scholars Merit Scholarship (2015-present). He is the founder and director of the Summer Institute on Tenure and Professional Advancement, a junior faculty mentoring initiative that has received more than $1.3 million in support from the Andrew W. Mellon Foundation.

In 2015, Haynie was recognized for his work with graduate students when he received the Dean’s Award for Excellence in Mentoring from the Graduate School. He also has received Duke’s Equity, Diversity, and Inclusion Award (2012), Blue Ribbon Diversity Award (2012), and Samuel DuBois Cook Award (2014).
Haynie is Co-Principal Investigator of the Duke Collaboratory on the Transformed and Transforming American South. 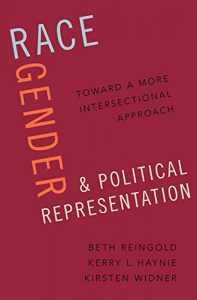 Race, Gender, and Political Representation: Toward a More Intersectional Approach