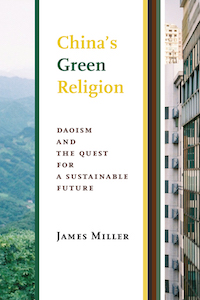 Available for pre-order on Amazon.com

As the world reaches a population of nearly 10 billion people in 2050, as climate change provokes unexpected transformations in weather patterns, as sea levels rise, and as water and food security become paramount concerns for nations, the question of how China manages these challenges are ones that have serious implications across the world. No one wants China’s vast economic, political and environmental experiment to fail. At the same time, it is evident that the way that contemporary Western and Chinese societies are structured together in a system of global finance, trade and economic exploitation is ultimately unsustainable and will lead to the drastic reordering of the fundamental relationships between the planetary biosphere and the species that inhabit it.

The source of this unsustainability is the inability of modern neoliberal ideology and its attendant cultural forms to conceptualize and operationalize a way of being in the world that inscribes human prosperity within the prosperity of planetary life. Rather we have come to conceptualize human prosperity in a way that is alienated from the ecological systems that make such prosperity possible. As a result, the modes by which we pursue human prosperity serve only to diminish its long term viability by destroying the ultimate foundations for prosperity, that of the capacity of the natural order to produce of its own accord the creative vitality that can support the flourishing and wellbeing of all species. Such a capacity I term the subjectivity of nature. By denying nature’s subjectivity and arrogating subjectivity and agency to itself alone, modern human culture has sowed the seeds of its own destruction.

China’s Green Religion develops a normative critique of this aspect of modernity from an ecocritical analysis of ideas and values found within Daoism, China’s indigenous religious tradition. It also aims to produce an alternative vision for a culture of sustainability that is of relevance to China and the world in the mid twenty-first century.

The book will be available from Columbia University Press in May 2017 and is available for pre-order now.

This entry was posted on Monday, October 17th, 2016 at 4:31 pm and is filed under Books, Publications. You can follow any responses to this entry through the RSS 2.0 feed. Responses are currently closed, but you can trackback from your own site.