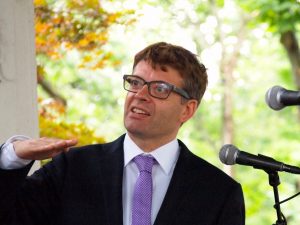 James Miller is the inaugural Professor of Humanities, Co-Director of the Humanities Research Center, and Chair of the Faculty Assembly at Duke Kunshan University. He is also Editor-in-chief of Worldviews: Global Religions, Cultures, and Ecology.

Professor Miller’s academic career began with the study of Chinese language and culture at Durham University in the UK. He has become a leading interpreter of Daoist religion, through his study of the medieval Chinese religious movement known as The Way of Highest Clarity. Over the past eighteen years, he has published six books on Chinese religions, including most recently China’s Green Religion (May 2017). Professor Miller’s has given lectures around the world in English, Chinese and Spanish, and his work has been translated into Italian, Chinese and Farsi.

Professor Miller is widely known as a key scholar of religion and ecology in China. China is now the world’s largest emitter of greenhouse gases and will eclipse the US as the world’s leading economy within a decade. China is experiencing massive economic change and unprecedent environmental devastation. Professor Miller’s research illuminates how China’s religious and cultural traditions, especially Daoism, continue to influence Chinese social imagination about nature and environment and can help develop a Chinese ethic of ecological sustainability.

In addition to scholarly publishing, Professor Miller regularly speaks at academic conferences, and gives public lectures and media interviews on a wide variety of topics related to religion and culture in China. Media outlets have included the Washington Post, CTV Newsworld, CTV Canada AM, and the Christian Science Monitor. He has given guest lectures all over the world, in multiple languages, from China’s Fudan University, to the Australian National University and even the United States Naval War College. He has also consulted on legal matters related to Chinese religions in North American society, including preparing expert witness testimony for civil court proceedings.

One thought on “Welcome”