“Why can’t people see the construct? What is seen, and what is not, in the final film?”

Prof. Kudva’s seminar focused on the links between production culture, media literacy, and documentary theory. How is it, they opened by asking, that a reality TV producing team who set out to ridicule fantasies of wealth ended up transforming Donald Trump into a serious national star? How can we explain the gap between what the editors thought they were building and what the audience perceived? More broadly, what would it take to foster critical media viewership, and what are the stakes of this effort, pedagogically, politically, and ethically?

Prof. Kudva described the permeable borders between the worlds of advertising, politics, and entertainment–to take one example, the same production company that designed advertising for a disastrous music festival, Fyre, later produced a Netflix documentary about that festival’s failures, and is now creating memes for the Michael Bloomberg presidential campaign. (More info here and here). This is not new: in the early 20th Century, a French fur company financed Robert Flaherty’s film, Nanook of the North, which soon took on canonical status as a pioneering documentary and ethnographic film. The films origins in advertising, however, and the ways in which this influenced its depictions of life in the Arctic, have received less attention.

“What is at stake in documentary today is not so much truth, as trust and betrayal.”

Prof. Kudva drew from a rich body of scholarship in documentary and film theory around questions of representation and artifice and the role of documentation in the development of state power. Some of the seminar’s most compelling insights, though, stemmed from Prof. Kudva’s own personal experience working in film and TV. Their emphasis on production cultures, or the kinds of relationships that develop behind the camera and in the editing room, grounded and complicated the theoretical conversations.

The seminar ended with a conversation about how to merge film/media and ethnography, and a reflection on the importance of teaching critical media literacy to students. While younger generations are often assumed to understand media, Prof. Kudva highlighted the crucial difference between knowing how to use something and understanding how it works. People of all ages need to be taught how to understand media–film, TV, memes, social media, advertising–as constructs, ones with messaging both overt and concealed. One of the ironies of much contemporary documentary/reality TV production is that the apparatus of filming is visible–mics are in the shot, the producers talk to subjects or directly to the camera–and yet showing this artifice helps to shore up viewers’ trust in the film. Viewers become more gullible, not less, the more they are reminded that they are watching a film. “What is at stake in documentary today is not so much truth, as trust and betrayal.”

UPDATE! Prof. Kudva adds that “certain mediums that purport to represent reality are more obvious in signaling creativity, expression, construct, purpose, and strategy. Peasantries consigned to the early state were highly aware of the meaning of cuneiform documents and burned down records offices to ‘blind’ the state. Comics signal creative representation because the process of drawing—the line, the mark of the author—is visible. The written word looks and feels nothing like reality—a clear technology in which connotation and interpretation weigh heavily. Audio is missing the visual. Both audio and the written word require participation from the reader/listener to imagine the ‘missing’ pieces of those realities. Conversely, video and film and photography seem like an indelible mark of something that was. There’s no denying what was captured (the word ‘captured’ itself takes on a fascinating meaning). Video as a mark of reality feels true and compelling and tends to obscure concepts of perspective and creative expression, even when those films/videos are cut up and rearranged and create another form entirely.”

Short Biography
Sowj Kudva has been working in video production for nearly two decades, and has recently branched out into writing for radio and comics. As a freelance filmmaker, they have produced videos for corporate clients, non­profits, and independent filmmakers. Their work has premiered at national festivals and conferences, and has been distributed on a number online media outlets. In addition to freelance filmmaking, they have held Senior Producer positions at both WIRED Magazine and ITVS. Sowj is passionate about bringing a social justice lens to production cultures, media literacy, and narrative theory. Sowj completed their MFA in Film and Media Arts at Temple University and will be an Assistant Professor of Cinema & Television Arts at Elon University beginning Fall 2020.  Check out their work at their website, sowjfilms.com! 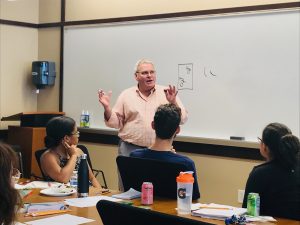 “This is not a workshop in how to draw,

this is a workshop in how to see.”

The Ethnography Workshop hosted anthropologist and artist Andrew Causey for a workshop in “Line Drawing as Research Method.” This workshop introduced participants to drawing as mode of learning, and not only documenting. To start the workshop, Andrew shared his own process of coming to this conceit and shared stories from his fieldwork in Sumatra (see Hard Bargaining in Sumatra (2003)). 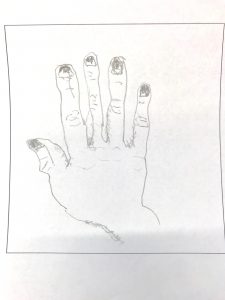 * Open yourself to fun

* Cultivating a new interest in perceiving the world around you

* Acknowledging that drawing can be useful as ethnographic method

Andrew Causey is Associate Professor of Cultural Anthropology in the Department of Humanities, History, and Social Sciences at Columbia College Chicago, where he teaching courses ranging from “Visual Anthropology” “Ethnographic Films” and “Writing Anthropology.” For more on drawing-as-method, check out his 2016 book “Drawn to See: Drawing as Ethnographic Method” (University of Toronto Press). 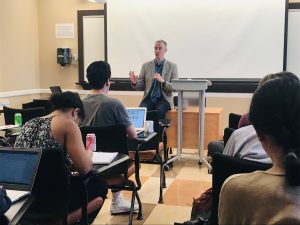 The Ethnography Workshop hosted Jeff Mantz, the NSF Cultural Anthropology Program Officer, for a grant-writing workshop with doctoral students from cultural anthropology on Thursday, Sept. 19, 2019.During the two-hour workshop, graduate students refined areas specific to their own research projects as well as learned general principles for communicating effectively in the grant genre. Here are a few takeaways: 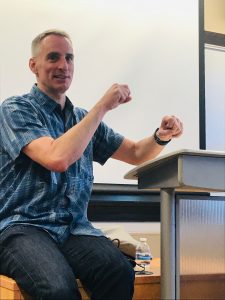