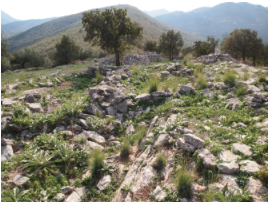 In collaboration with Donald Haggis and Michael Lindbloom, Uppsla University, Worsham will map and create a 3D model of the Malthi settlement. Malthi is a Middle to Late Bronze Age archaeological site that many scholars have largely ignored in recent years.

“The site was excavated in the 1920s and 30s, but has not been meaningfully examined since then, partially as a result of problems with the interpretation and dating of the site by the original excavator,” Worsham explains. “As a result, a large body of available archaeological data, including domestic, industrial, and administrative spaces, and representing one of the fullest settlements of the period, has been dismissed from the academic dialogue, while the site itself is being destroyed by erosion and exposure.”

Through her digital imaging of the site, Worsham will trace the organization and re-organization of Malthi, uncovering how the architecture and other socio-cultural elements influenced the settlement patterns of the area.

Read more about the project here and at the SPARC’s website.