Our research is interdisciplinary in nature, with broad concerns encompassing climate change, air quality, and the links between science and policy.

Expanding impact analyses for climate change and air quality: Prior studies by our research group have included impacts such as the effects of air pollution on premature deaths and the effects of both air pollution and climate change on crop yields. Current projects include expanding the impacts included in our analyses to encompass the effects of exposure to extreme heat on  premature deaths and on labor productivity, accounting for addition health impacts of exposure to air pollution including morbidity (e.g. lost works days, hospitalizations), and improved agricultural models.

Analysis of the Multiple Impact of Methane Emissions Mitigation: Methane is both a powerful greenhouse gas and an important precursor of ozone production in the lower atmosphere (the troposphere), where ozone is toxic to both people and plants. In cooperation with modeling institutes worldwide and with the support of UN Environment, we are leading an assessment of the worldwide impacts of methane emissions on climate and ozone, including the resulting effects on human and ecosystem health.

Co-benefits of climate or air quality policies: Most emission sources of the greenhouse gases that drive climate change also produce other pollutants that are harmful to humans and agriculture. Therefore, climate policy has the capability of simultaneously reducing deleterious air quality, and air quality policies will likewise affect climate. “Co-benefit” studies assess these complex relationships through modeling of the energy system, atmospheric chemistry, and subsequent climate changes and exposure to pollution. Ongoing work is probing the impacts of a transition to a 1.5C or 2C pathway consistent with the Paris Climate Agreement, and of decarbonization of the energy sector in the US, among other topics.

The two figures below show prior co-benefit results from Shindell lab members.

These “co-benefits” can be assessed in reverse, extending the Social Cost of Carbon (SCC) framework to include the air quality based externalities in total costs. A multi-impact economic valuation framework called the Social Cost of Atmospheric Release (SCAR) was developed that extended the SCC to a broader range of pollutants and impacts. Shown below is the levelized costs of various primary energy sources, after factoring in environmental damages (externalities) that are not typically considered in the market. 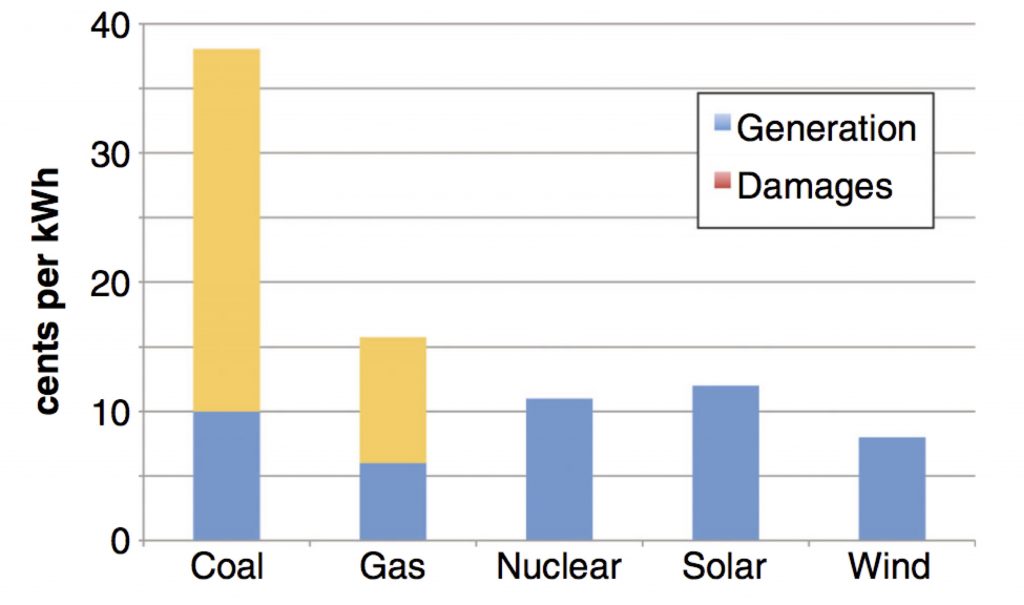 Accelerated reduction of fossil fuel use (rather than reliance on presumed future carbon dioxide removal): Scenarios that limit global warming to 2 degrees C often rely on heavy implementation of negative emission technologies, such as biofuel energy with carbon capture and sequestration (BECCS). These assumptions do not account for the added societal risks that accompany relatively high levels of near-term emissions, such as reduced air quality. If future negative emissions were instead replaced with near-term reductions, dramatic improvements in air quality would occur, reducing premature mortalities by millions. A Shindell lab project completed in 2018 concluded that  a ‘standard’ 2 °C scenario without negative emissions would lead to 153 ±  43 million fewer premature deaths worldwide, with ~40% occurring during the next 40 years, and minimal climate disbenefits. 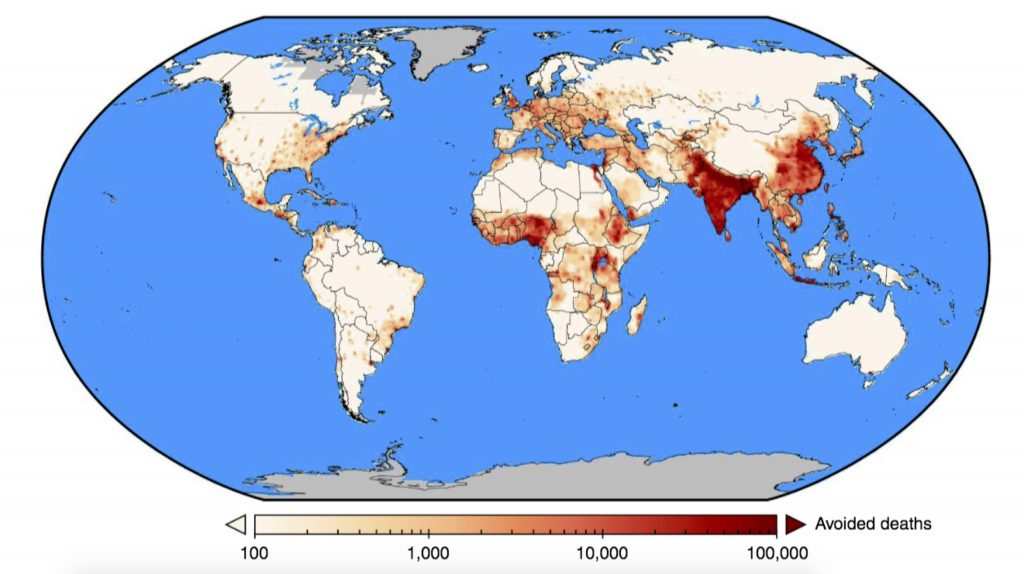 Modeling of human-health impact metrics: The quantification of impacts due to policy simulations utilize many tools. The Shindell lab is actively evaluating common models that simulate changes in air quality and how well they are able to reproduce various impact metrics. Not only do these results determine model performance, but drivers of bias can be elucidated. In addition, techniques to correct for bias and improve simulations are being utilized. In concert with these efforts, ground-based monitoring networks are being used to constrain estimates of air quality impacts.

Climate and Aerosols: Aerosols are important drivers of global and regional climate. Either through primary emission or secondary formation via chemical processes in the atmosphere, these microscopic particles may induce warming or cooling effects. Output from the Precipitation Driver and Response Model Inter-comparison Project (PDRMIP) is being used to study how perturbations of greenhouse gas, aerosols and solar insolation individually cause regional climate responses. This information can then be used to determine regional temperature and precipitation responses to these drivers.

Normalized change in precipitation due to incremental perturbations of CO2, BC, and SO4 forcing. From Tang et al., ACP, 2018.

The relationship between income and emissions has been extensively examined and debated by economists. Members of the 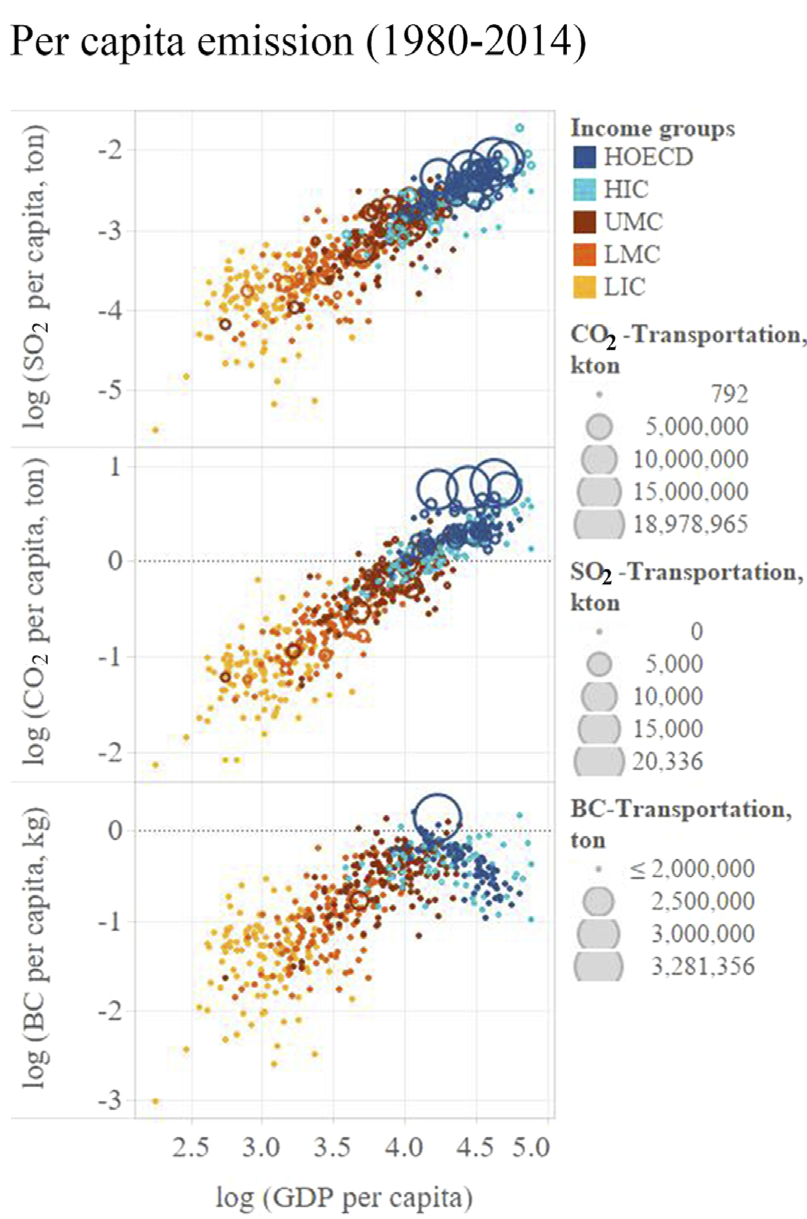 Shindell lab have characterized the relationship between per capita income and emissions of SO2, CO2, and black carbon (BC) from the power, industry, residential, and transportation sectors using a global country-level emission inventory to assess the existence of the Environmental Kuznets Curve (EKC) in the trajectories.

Impacts of Emissions on Agriculture via Climate and Air Pollution:

Field measurements and modeling have examined how temperature, precipitation, and exposure to carbon dioxide (CO2) and ozone affect major staple crops around the world.  We have examined how emissions of each individual pollutant driving changes in these four factors affect present‐day yields of wheat, maize (corn), and rice worldwide. Such information will be incorporated into decision-making support tools to enable better evaluation of the effects of policies related to energy and transportation on crop yields. 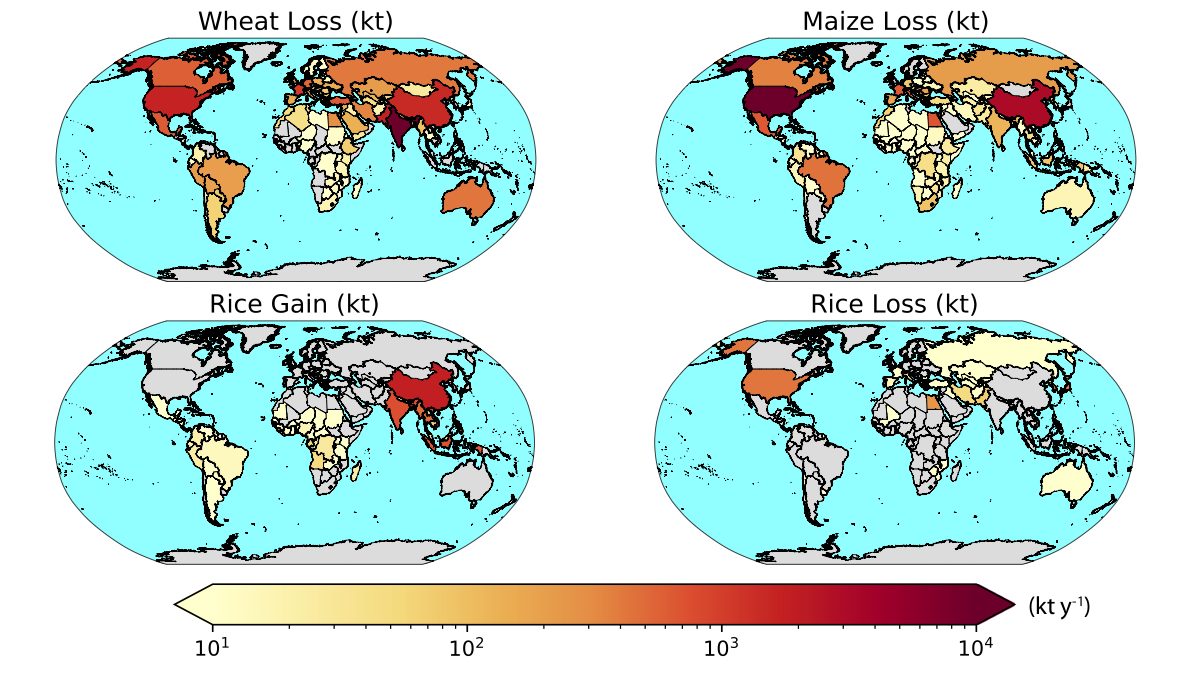 Annual production changes in 2010 due to historical emissions of all pollutants by country. From Shindell et al., Earth’s Future, 2019.