Q: Should permaculture be a part of designing nature’s future

A: I think it should be, but it will face an uphill battle to be a significant part of nature’s future.

People are comfortable with the familiar – change requires effort and investment in uncertainty.  Mainstream change only occurs if a critical mass of people (known as Early Adopters) take the risk of the change (see figure below). This is seen consistently with new technologies, a large investment is required to get people interested enough to inspire widespread behavioral change. Apple, for example, used to only target the early adopters in advertising, knowing that the subliminal advertising of the early adopters would bring in the early majority organically. However, often the critical mass of people is never reached (Segway, Apple Pay) and so either the technology is either abandoned or lives permanently in a niche. 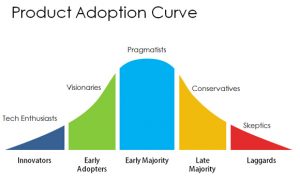 Permaculture is precisely what the term describes: Permanent Culture. Culture is the underlying fabric of how society is put together and given the many ideologies floating around competing for attention, it seems to be hard to reach the critical mass to inspire mainstream social change. As previously stated, change requires effort and risk – and earlier iterations of our relationship with nature offered a very tangible improvement to humanity. Agriculture was a substantial shift in human development – moving towards consolidating resources to allow for easier access to sustenance that previous methods (hunting and gathering). Gradually this became the status quo because it made lives more comfortable and more prosperous. The same is true of industrial agriculture – it allowed the expansion of populations and generally increased the way of life.

Although permaculture offers obvious benefits, they are not as tangible as agriculture or industrial agriculture. It is easy and cheap to buy food from a supermarket, stormwater is never at the forefront of the general population, and not many people frequent the roofs of buildings. It very quickly becomes a question of: why should I care enough to act? This is a commonly asked question within environmental issues – people acknowledge the damage of their actions, but the mental math of effort vs. tangible benefits often means no one acts.

To inspire the critical mass of early adopters it is important that films like Inhabit continue to be made, and the people like those in Inhabit continue grassroots outreach beyond their own demographics. Incentives should always be encouraged by incorporating permaculture ideas in city planning and in civic leadership. The change towards a mainstream permaculture will not happen overnight, and it may not happen ever unless a critical mass of early adopters is reached so that the organic growth (no pun intended) of permaculture can occur.