Bridging the gap with fiction

Often, people do not see the impact of their actions on the environment. There is no immediate visual indication of how their full gas tanks, ubiquitous air conditioning, or even long showers damage our ecosystem, and consequently, many of these people continue with their harmful quotidian routines, ignorant of their impact. Unbeknownst to them, more often than not, their lifestyles’ negative byproduct contributes to the pollution of environments hundreds of miles away from them. This geographical disconnect between these peoples’ actions and their actions’ effects may never be closed; therefore, it is imperative to educate people of their impact because quantifying the effect of their lifestyles will help them understand the reason they need to change.

In Oil on Water, the reader is introduced to a country plagued by oil. Foreign greed for oil had reduced the country’s land and people to just tools for harvesting more oil. By viewing these people as inanimate objects, the foreign oil tycoons never developed any empathy for these people’s hardships. They never knew the smell of oil on water. In order to have the reader develop empathy for the country’s suffering, Helon Habila fills his narrative with vivid descriptions of the country’s environment: everything from the sweet taste of corn porridge to the putrid smell of dead life in the oil-infested waters. By familiarizing the reader to the realities of the country’s environment, Habila attempts to bridge the geographic disconnect between the readers’ lifestyles and their foreign footprint on a land’s environment. 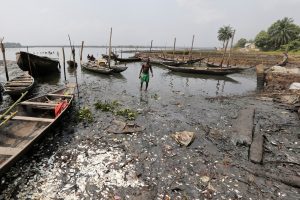 Although fiction may not be the most succinct way of communicating facts, it is indeed a valuable medium for immersing a reader in experiences starkly different from their own. Without personal experience, it’s sometimes difficult to understand the gravity of a problem; however, fiction attempts to fill that void by recounting the experience of someone else and ultimately making you feel as if it were your own.