1. Some climate scientists and journalists have complained that the public cannot “see” global warming. How would you solve this problem? Which medium do you think can most compellingly express the impacts of prolonged drought, rising sea levels, disease, and so forth?

By focusing our efforts on showing the effects of global warming NOW, I think the message will be much more effective, and by nature, it will allow the public to “see” global warming. Personally, I at one point, felt somewhat detached to the issue of global warming by this very precise reason. I knew of it because of books, and what I learned from my teachers – and I definitely believed it. But I always had the view that this was one of many problems humanity faced, and this particular issue can take a backseat to those problems because the timescale is larger than say, people’s health effects by drinking water from a polluted lake. My perceptions were immediately changed when my parents took me to Bangladesh, the country of my ancestry, in the summer of 2010. I had been to Bangladesh many times in the past, but it was always in the North, were my grandparents and relatives lives. This time, my father took me to the southern coastal region of Bangladesh so then I could see the different, much more difficult life those in that region were living. I was stunned to see that in many places, I was knee deep in water. I noticed the ruined remains of homes due to the high elevation of the water. My father told me that 30 years ago, this region was always dry – but steadily, as sea levels rose, the region progressively flooded more and more, to the present state of today.

When I got back home, my father showed me pictures of what the region looked like before, back when he was a kid. It struck me hard – global warming was real, AND it was happening NOW. People’s lives homes and belongings are being displaced, and their lives ruined.

So I feel the most ideal thing is to physically show people the places directly affected by global warming as I had seen – but clearly this isn’t feasible. The next best thing is to spread the pictures and videos of regions like southern Bangladesh via online video sites like YouTube, and television programming. This is the next best thing to do. Increasingly , the issue of low-lying lands being affected by rising sea levels is coming to the doorsteps of nations like America, which arguably have had the greatest impact on causing global warming to begin with. I believe that once this starts to happen on a larger scale, such media propagation via television and online websites will dramatically increase. 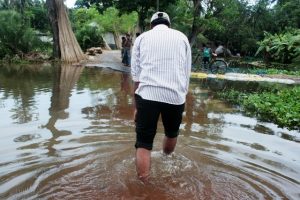 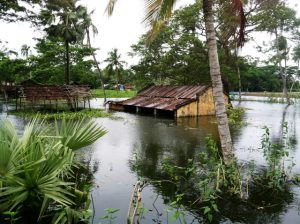