The Rise of Prisoners’ Unions in the 20th Century

By Chirag Bellani in Primary Source Analyses on August 6, 2020. 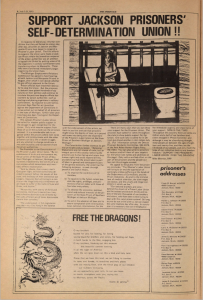 The 1970s was a period in which prisoners demanded better treatment and sought, through a series of strikes and movements across the country, access to their civil and judicial rights. As Dan Berger writes in his book Captive Nation: Black Prison Organizing in the Civil Rights “while prisoners were a central element of the civil rights and Black Power movements,” their movement and organization was not just to expand their rights, but also a “critique of rights-based frameworks.”[2] Such strikes and uprisings were the “product of larger circulations of radicalism” at a time when there was a “massive outpouring of books and articles from incarcerated people.”[3] This chosen primary source is an example of just one of these such articles.

This primary source, a newspaper article titled “Support Jackson Prisoners’ Self-Determination Union!!” written by Mike Minnich, a representative of the Rainbow People’s Party (RPP), was published in the July 7, 1972 – July 21, 1972 edition of the Ann Arbor Sun (The Sun).[4] The article is a call for public support for the formation and recognition of a prisoner’s union at the State Prison of Southern Michigan, which was located in Jackson, Michigan. It can be assumed that the prison was exclusively for males, as indicated by the male names listed under the information for “prisoner’s addresses” in the article.[5] Minnich, the author, served on The Sun’s editorial committee and therefore it can be assumed that he wrote frequently for the publication.[6] What is important to note and is crucial to understanding the nature of the publication is that The Sun was started by the Central Committee of the Rainbow People’s Party (RPP). Founded by John Sinclair in April 1967, The Sun was a biweekly underground, anti-establishment newspaper and was considered to be the mouthpiece of the White Panther Party in Michigan, a far-left anti-racist political collective founded by Pun Plamondon, Leni Sinclair, and John Sinclair.[7] The organization was founded in response to an interview where the co-founder of the Black Panther Party was asked what white people could do to support the Black Panthers. Later on, the White Panther Party was renamed to be the RPP. The organization claimed that they were dedicated to helping organize the Ann Arbor community as an infrastructure so that people could start to come together and combat imperialism, capitalism, racism, and sexism which make the social order unacceptable. Such an article is in line with the organization’s agenda to support the rights of prisoners and the establishment of a prisoner’s union. Minnich’s explicit call for action is typical of such an organization, specifically the suggestion to attend rallies or write letters of support to prisoners as detailed in the article.

It is clear that the intended audience of the article in question was first and foremost for followers of the RPP. As an underground publication, it did not necessarily gain major popularity during the years of its publication. In fact, the newspaper was for a succession of communities around John Sinclair.[8] However, it is worth mentioning that in 1972, when this article was published, the newspaper had become an independent publication spreading views on local issues, left-wing politics, music, and arts.[9] The FBI and the Nixon administration viewed the RPP and by association, The Sun, as a “band of subversives plotting the overthrow of the government.”[10] It had never been popular for convicts to be defended or held in high regard. Certainly, challenging prison labor systems and garnering support for a prisoner’s union was not something commonly done.

The purpose of the article was to call for “massive public support” that had been requested by the Jackson Prisoner’s Labor Union in their “struggle to gain recognition for the Union.”[11] There is a clear acknowledgment that at the time, organization and assembly were difficult in prisons and that support was needed for organized events to be held for the cause outside prison walls. The article voices the goal of the Union, which is to “present before the people of this state, and the body of men selected as our keepers,” a way to bring to an end the “illegal and unjust treatment” faced by prisoners.[12] During this period in the 1960s and 1970s, and according to Sarah M. Singleton of the Indiana University School of Law, there were “cries for sweeping reforms.”[13] It was clear that there was a need for rapid change in certain aspects of the penal system. She highlights that prison employment was one of the most critical problem areas that needed improvement. In the article, it is evident that the Prisoner’s Union argued the same. With regards to convict labor specifically, harms at the time included, but were not limited to, “enforced idleness, low wages, lack of normal employee benefits, little post-release marketability, and the imposition of meaningless tasks.”[14]

At the crux of the article is an outline of the Constitution of the Prisoner’s Labor Union. It is fitting that the publication appeals to its readers via general principals and purposes that they typically supported, such as the belief that “prisons are not the islands of exile, but an integral part of this society,” which sends a message that prisoners are people too and deserve to “retain their human rights and social responsibilities.”[15] Another clear argument of the prisoners is that prison labor is part of the general economy and that they ought to be given the same tasks and rights that were afforded to ordinary state-employed citizens.

Courts no longer saw prisoners as a “slave of the state.”[16] In fact, the judicial standard was that a prisoner has the right to organize if ordinary citizens have such a right and if the right has not expressly been taken away by the state.[17] As of 1973, organizing was occurring in at least six states. In California for example, over 3000 members joined the United Prisoners Union, and in New York over half of the inmates at Greenhaven Correctional Institute became members of the Prisoners’ Labor Union.[18]

Heather Ann Thomspon, a Pulitzer Prize and Bancroft Prize-winning author of Blood in the Water: The Attica Prison Uprising of 1971 and Its Legacy said in an interview that prisoners have been treated inhumanely throughout American history and that in every region of the country they have always resisted.[19] As a result of World War II, there was increased determination among prisoners and along with the Black freedom struggle nationwide. In the 1960s and 1970s, prisoners became particularly active in terms of this resistance.[20]

Prisoners’ demands were two-pronged. At one prong, the prisoners echoed the sentiment of activists – they voiced their opposition of racism, against violence directed at them by the state, for better living and working conditions, for better access to education, and for proper medical care. These are the same goals as listed under the Constitution of the Jackson Prisoner’s Labor Union. However oftentimes, the demands were centered more on fundamental human rights. To put it simply, prisoners demanded over and over again to be treated like people.

The significance of the rise of prisoners’ unions can be established by the sheer number of labor strikes and uprisings that took place in the 1960s to 1970s time period. They achieved a lot in terms of focusing attention on the abusive and inhumane conditions of prisons. However, these movements were only possible with the support of steady organizing initiatives, just like this one supported by the Rainbow People’s Party. It is also prudent to consider the “crowded field of political activity at the time.”[21] Various parties, including prisoners, prison guard, and police unions, prosecutors, and politicians were all leading competing approaches to criminal justice issues.

← Capitalism through Incarceration, Racialization, and Assimilation Analyzing the “Australian Mission” →