By Amani Ahmed in Interview, Weekly Reflection on June 2, 2016.

Today, I had the opportunity to speak with a man called Ismail about citizenship. Ismail is a young Moroccan math teacher and is from the city of Fez. I interviewed him about his perspective and thoughts on active citizenship in Morocco through an informal conversation. For Ismail, being a Moroccan citizen most involves being connected to the culture and the faith that informs the country’s principles and values, Islam. He spoke about how Islam positively influences Moroccans and shapes the country’s narrative. When I asked more about other cultural aspects that are important, he explained how food is so central to the essence of being Moroccan. In his opinion and his experiences, people in many other countries do not eat as well as Moroccans do, and the practice of sharing traditional meals enriches the Moroccan culture. When people take the time to share a wonderful meal and tea, they are uniting friends and family, stepping away from busy schedules to enjoy the day.

Next, I asked Ismail about what a “good” or “bad” citizen would look like. He explained that he feels it is most important for a good Moroccan citizen to read. He feels that in the United States, people study for the sake of learning, because they have genuine curiosity and are passionate about their fields of interest. He explained how he has had access to American textbooks and they are more cohesive and conducive to understanding the subject matter. He feels that people in Morocco study to earn a degree and mostly memorize information instead of internalizing and genuinely understanding it, as he feels Americans do. In Morocco, he feels that many people, especially young people, do not have a desire to read books and develop their intellectual interests. He quoted a study he read once that claimed that in the United States, the average person reads 35 books a year. In the Arab world, one book is read for every forty people. This illiteracy is tragic and shameful for the Arab world, in his opinion. Ismail articulated how Arabs are often portrayed as oppressive, as terrorists, etc. in media throughout the world (particularly in Western nations), and he feels like the Arab world’s illiteracy contributes to an inability to properly defend and represent the true Arab world. When I asked him how illiteracy should be conquered, he explained that it is everyone’s responsibility, and programs should be created by good citizens and the government. 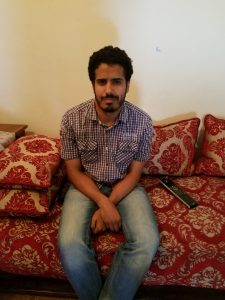 Regarding the government, Ismail is not so concerned with the responsibilities of the government or the relationship between the people and their political representatives. He said it is most important for each individual to be good. “Good” means knowledgeable, curious, empathetic, active, in Ismail’s opinion. People need to be good at their very core, in their hearts and in their minds. He continued to say that if people were all good, the government would be good by default. I was really struck when he said that the government is only as good as its people – its representatives and leaders are not the worst in Morocco, but they are certainly not the best. They are average, and they serve a community which they reflect. Individuals need to focus on themselves, and their own purification in order to create a society which deserves and requires certain privileges. For Ismail, Moroccans need to find goodness in their souls, always seeking knowledge and wisdom, especially in a way which may allow people to learn and contribute back to their communities