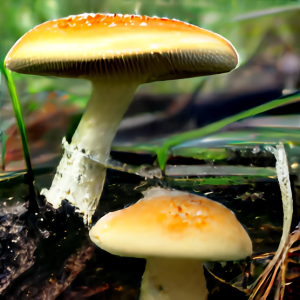 A charming image of plants and fungi from craiyon.com (it’s entirely theoretical, naturally)

I’m a theoretical ecologist: I use models to address research questions about populations and communities.  I like thinking about lots of things, but there are a few themes running through some of my favorite questions:

Interactions  Between species, there’s mutualism, competition, and consumption.  These aren’t at all independent, and who’s on the other side of which interaction, and how, and when, can really matter.  Individuals can also interact positively or negatively.  Humans in preindustrial agricultural societies, for instance, might grow food collectively and share it (or… not so much) in various ways.

Population structure, or Demography  Individuals are different, depending on attributes such as how old they are or how big they are.  Or, sometimes, on things such as which species of ant is currently around.

Spatial processes Everything’s patchy.  Sometimes it doesn’t matter much, but other times it really does.