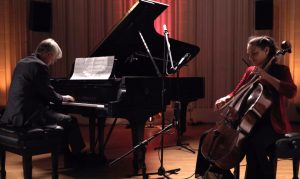 This Friday’s “Best of Biddle” video premiere features Professor R. Larry Todd’s recording of Beethoven’s Cello Sonata Op. 5, No. 2. The video is divided between Professor Todd’s introduction, which places the work in its historical and musical context, and his recording of the sonata with cellist Nancy Green.

Hailed by Fanfare Magazine as “one of the great cellists of our time” and “in the elite of today’s concert cellists,” Nancy Green is an internationally recognized recording artist, known for her highly acclaimed CDs of previously unrecorded works as well as staples of the cello repertoire. She has appeared as soloist in venues such as Boston’s Symphony Hall, New York’s Alice Tully Hall, the Kennedy Center in Washington, DC, Windsor Castle, and London’s Wigmore Hall as well as major concert halls in Shanghai, Taipei and Seoul.

This entry was posted on Tuesday, February 23rd, 2021 at 3:29 pm and is filed under Faculty Performances. You can follow any responses to this entry through the RSS 2.0 feed. You can leave a response, or trackback from your own site.