Earlier this month, Vaddio (now a division of Milestone AV Technologies as of April 2016) visited the TEC to provide an in-depth technical overview of their new RoboTRAK camera tracking system. The system, used in combination with many existing Vaddio cameras, functions by tracking a lanyard worn by the subject. When worn, the camera pans and tilts to follow the subject based on a wide range of technician configurable variables. Setup seemed straightforward, and the Vaddio team was able to have a functioning demo unit configured in under thirty minutes. The base tracking configuration seemed smooth and consistent. Beyond the standard system the RoboTRAK also allows classroom AV integration to further expand the in-room user-serviceable configuration. For example, with a bit of code added to your classroom AV system, the tracking could easily be disabled by default, requiring the guest to turn the tracking on for their sessions. Also, the technician could add “scenes” to the AV system to provide unique tracking capabilities, or to interface directly with the room. Needless to say, it’s very configurable. Vaddio also showcased their ConferenceSHOT AV, a comprehensive camera, speaker, and microphone huddle-room AV package. The system has the ability to add two mic inputs, good video quality and a surprisingly high quality speaker that could be used in combination with a monitor or TV. Finally, Vaddio provided a deep dive on the streaming capabilities of many of these devices and how they can be configured to meet a wide range of needs.

Oh Kickstarter… how you love to torment us. Most AV technicians know that the world of software based video conferencing is rapidly expanding. Every tech company seems to have some form of home-grown video conferencing. Google has Hangouts and Duo, Microsoft (now) has Skype and Lync… I mean Skype for Business, Facebook has Messenger with video calling, Adobe has Connect, Cisco has WebEx, Apple has Facetime, and that’s the short list of conferencing connections we are asked to support.

What caught my attention is that Solaborate plans to add Skype, Messenger, Hangouts, and WebEx support if they reach their $300,000 stretch goal. Considering they currently have $225,905 pledged on their original goal of $30,000, with 16 days to go, they may just make it. It’s important to note that this is a Kickstarter project… so take some or most of this with a grain of salt. But, if Hello lives up to the hype, it could be a very interesting device for small meeting spaces.

Often in our course production, instructors wish to include video interviews with guests as part of their materials. While doing this in the studio is straightforward, often these guests are not able to join us on campus. In these cases, we rely on tools like Google Hangouts or Skype to facilitate the conversation, which while convenient, adds some complexity to making a great video. For those with access to DukeWiki, we’ve documented some of that process here.

For a recent interview, I wanted to push our usual process further. If you’re familiar with Errol Morris documentaries, his interview subjects talk straight into the camera. Instead of the interviewer sitting off-camera, he uses a teleprompter-like device that displays the live video feed of the interviewer in front of the camera, which gives a deeper level of intimacy to the interview. With the tools we had, I wanted to see if we could do something similar. Here’s the set-up I ended up with. We have our usual 4K camera/iPad teleprompter set-up, only I’ve swapped the iPad out with one of our LED monitors to display the video feed coming from a Google Hangout hosted on my Macbook Pro. An iPad would’ve been ideal, but there’s no way to use an external webcam (here mounted right on top of the teleprompter glass), and the built-in cameras simply wouldn’t face the right way for our interviewee to see us on his side of the Hangout. We filmed the interviewees in our studio, and they looked straight ahead at the camera the whole time as intended. This got me half-way to my goal.

The other piece was capturing the video of our interview subject. This is always tricky since we can’t easily control the set-up on the other end of the call and there’s not always time to fully test things out before the call. The ideal scenario is the interviewee can capture themselves locally with Camtasia, Quicktime, or similar software, at the same time as they are in Google Hangout. A lot can go wrong there, so I wanted to make sure we captured the video feed on our end as well. Between the Macbook Pro and the video monitor, we ran the Macbook Pro’s output through a Ninja capture device, which had a speaker hooked up to it so our interviewee’s could hear our subject. While the video quality would be reduced due to streaming compression, at least we had it if something went wrong with plan A.

With this much technology working in tandem, there’s bound to be hiccups. In this case, the issue that got me was a bit of audio feedback. In future set-ups, I would want to swap the speaker with a speakerphone that would eliminate this. There were some instances where I re-recorded elements in the studio after the call ended so that I could have a cleaner take of the interviewers giving a question. I’d additionally encourage the interview subject to use a similar device or use iPhone-like headphones to get around the same issue on the other end of the call.

Altogether, it came out pretty well:

In January 2016 I spent two weeks at Duke Kunshan University for the commissioning of the various AV installations throughout campus.  The AV design for this project started 6 years ago and is finally close to being completed.  IVCI began the AV design work in 2010 and then Verrex was brought on a few years later to handle the AV integration in China.  Throughout the past 6 years, folks from various schools/groups, including Duke’s Office of Information Technology, Trinity Technology Services, Fuqua, and the Nicholas School, have helped with the design and installation of the AV integration at Duke Kunshan University.

If you are interested in learning more about the various AV spaces at Duke Kunshan University and the technologies used in them, please contact me directly. Next Friday we are having a three part DDMC meeting, which will be co-hosted by OIT and Trinity Technology Services.  We will be meeting on Friday, October 30th at 2pm in the Sociology-Psychology building room 130. Please check below for the meeting agenda.  We look forward to seeing everyone there.

The Panasonic Fall Tech Tour is underway and will be in Raleigh next Tuesday 10/27 and Atlanta on Wednesday 11/4.  This will be a great opportunity to see some of our newest technology – including laser projectors, video walls, interactive displays and large screen 4K displays.  Please be sure to register by clicking on the link below.  Also – please invite others who you think would like to attend.  The event will run from 9 AM – 3 PM – breakfast and lunch will be provided.  For locations and more details, please click on the Register Now button below.  Hope to see you there!

Dr. Stephen Craig, Chair of Duke’s Chemistry department wanted to use live green screen for a presentation to some undergraduates at Florida Gulf Coast University. We had used Wirecast to try this in the past in the MPS Video Recording Room but it had never worked that well. We suspected it was due to the camera and lighting in that room not being optimized for green screen. We tried it again with our improved lighting in the MPS Studio and it worked well enough, but we were streaming Wirecast to YouTube.

Wirecast is generally used to stream content to YouTube or our own DukeStream Wowza server or many other web broadcasting services. If you are not familiar with it, it is like a software video switcher that allows you to build shots using green screen, picture in picture, put in graphics such as lower thirds and do wipes and dissolves between real cameras or even IP cameras.

Our original test was streaming to YouTube and then speaking to the class via Skype. This did not work well because of the 20-30 second delay for YouTube streaming. After a ton of googling and working with Jack D’Ardenne, we realized that Wirecast has a virtual camera output. Sure enough, if you start the virtual camera output, then applications such as Skype, Google Hangouts and even WebEx recognize the output of Wirecast (composited or whatever) as a camera. This is huge! We’ve used programs such as Camtwist in the past to do this (free but yucky) so having a professional app like Wirecast support this opens a lot of possibilities for distance learning.

Wirecast will also record and stream simultaneously but it’s not a great tool for recording both sides of a Skype interview (although you can bring Skype into Wirecast as well).

Please feel free to contact oit-mt-info@duke.edu if you’d like more information or to try this out at our new studio “StudioONE” located in the Telcom Building. 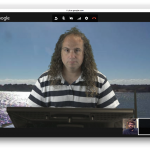 Thrilled that it works in Google Hangouts 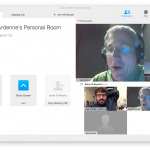 Here it is in WebEx 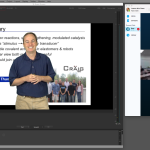 The Harvard Business School recently launched the HBX virtual classroom.  “HBX Live is a studio based classroom located at WGBH Boston (public TV station) that enables 60 individuals from different locations around the world to join in a real-time discussion with Harvard Business School faculty.  The HBX Live platform combines a physical studio with unified communication, broadcast IT, and cutting edge audio and video technologies.”

A huge undertaking that is definitely worth checking out.

They are “coming together to optimize Cisco networks for iOS devices and apps, integrating iPhones with Cisco environments and providing unique collaboration capabilities on iPhones and iPads.”

Initial focus will be:

For those that couldn’t make it, we had a great demo at Cisco’s briefing center. We got to see a few of Cisco’s latest MX, SX, and DX video conferencing systems. We also got to see a few new web collaboration technologies Cisco has recently released, some of which will be available at Duke later this year. We plan to have a Duke community meeting in August so Duke OIT’s Networking team can give an update on which of the following Cisco technologies will be made available.

Below are links to the various technologies we saw and discussed.