Membership rosters will let future generations know who participated in your organization. This roster lists members of Duke’s Young Republicans Club during the 1969-1970 academic year. Member #79 is Bob Steel, who served as chair of Duke’s Board of Trustees from 2005-2009 (and was also vice chair of Goldman Sachs, CEO of Wachovia, and Deputy Mayor for Economic Development for New York City Mayor Michael Bloomberg.) 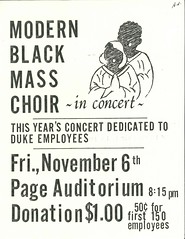