Rational drug use, overuse and resistance

Unnecessary overuse of antimalarials has serious consequences for both current and future patients. For today’s patient, treating non-malaria fevers with malaria drugs leaves the true cause of illness untreated and increases morbidity and mortality. Inappropriate use puts future patients at risk by accelerating the spread of drug resistance and shortening the useful therapeutic life of the current first-line drugs. Emerging resistance has already been documented in Southeast Asia and widespread resistance to artemisinin could create a public health crisis.

Up to 90% of fevers in sub-Saharan Africa are treated presumptively as malaria in the formal health sector and it is estimated that only 20% people buying first-line antimalarials in the retail sector actually have malaria. There is a significant discrepancy between those who need antimalarials and those who take antimalarials.

Performance based incentives in the formal sector

One of the most important safeguards against the spread of antimalarial resistance is the use of diagnostic testing to confirm malaria infection before treatment. My research team works on testing innovative and sustainable ways to expand coverage of diagnostic testing for malaria before treatment in two very different contexts – government-owned primary health care facilities (formal health sector) and medicine retail outlets (informal health sector). 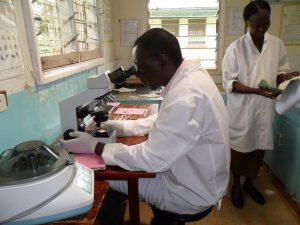 In the formal health sector in Kenya, only 25% of reported malaria cases are laboratory-confirmed. Twice as many people receive artemisinin combination therapy (ACT) from government facilities as there are reported malaria cases; for example, in 2009, nine million cases of malaria were reported but 20 million doses of ACT were dispensed. In public health facilities, 40-80% of fevers are treated with antimalarials regardless of the results of diagnostic testing. Correcting this problem of inappropriate or presumptive treatment for febrile illness could reduce overall childhood mortality by an estimated 12-14%. Kenya has made testing before treatment with antimalarials official government policy since 2010, but changing prescriber habits has proved difficult, in large part due to poor institutional incentives. To reverse this trend, we tested the effect of performance-based incentives for malaria case management. This NIH-funded study in rural government health facilities is one of the very few examples of experimental evidence of the effect of performance-based financing in developing countries. 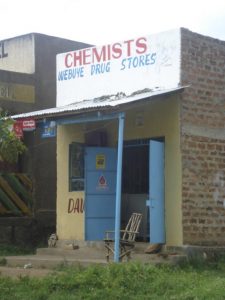 The problem of over-treatment of fevers with antimalarials cannot be corrected by focusing solely on the formal health sector. More than half of families buy medicine over-the-counter in the retail sector as their first action for fever. In order to improve affordability of effective antimalarials, many countries are providing highly subsidized, WHO-approved artemisinin combination therapies (ACTs) to the retail sector. During a pilot program, such subsidies dramatically improved availability and affordability of ACTs in pilot countries including Kenya, but also raised concerns about the overuse of antimalarials. Of the 14.4 million treatment courses of subsidized ACT sold in retail shops in Kenya in 2011, virtually none were dispensed to clients with a parasitological confirmation of malaria. Our work showed that the antimalarial subsidy program quickly led to improved availability of ACTs in the retail sector in a rural district in Kenya, but adherence to the target price was rare. On average, subsidized ACTs cost three times more than the intended retail price and were more commonly found in larger shops with higher sales volume. Despite availability of ACTs and familiarity with the government policy for treating malaria with ACTs, less than half of retail outlet personnel would recommend ACTs to a patient with suspected malaria. These studies led us to develop interventional approaches to improving use of malaria diagnostic tests before over-the-counter treatment.

We are conducted a community- based cluster-randomized controlled study to test a strategy that allows us to target the antimalarial subsidy to patients with parasitologically-confirmed malaria. Our strategy provides malaria testing using rapid diagnostic tests (RDTs) free of charge to community members through Community Health Workers. Patients with a positive test receive a voucher that can be redeemed at a local medicine retailer to receive a discount on a quality-assured, WHO-approved ACT. The voucher allowed the ACT subsidy to be targeted only to patients with a confirmed malaria infection and created an incentive for patients to be tested by a CHW before buying a drug. Individuals with a negative test or without a test had to pay a higher price for retail ACTs.  We found that after 18 months, the intervention improved the proportion of fevers tested before treatment by 25% and improved the proportion of ACT dispensed to true malaria cases by 40% compared to the control arm.

Following on the success of this project, we are working with Clinton Health Access Initiative to scale up a trial of targeted subsidies in the retail sector. This new NIH-funded study will explore the effectiveness of RDT subsidies coupled with targeted ACT subsidies on treatment decisions among people who seek care in retail outlets. We are designing a new mobile app that will allow us to interact with outlets and provide subsidy payments through mobile banking. This app will enhance the scalability of the program. We will work with retail medicine outlets in both Kenya and Nigeria.