Go back to Women’s Professional Leagues in Notable Countries 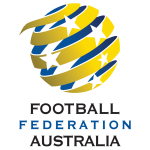 HISTORY OF THE LEAGUE

Westfiel W-League is the top flight division in Australian women’s soccer. This league was established in 2008 and boasts eight clubs as its members.  These include; Adelaide United, Brisbane Roar, Canberra United, Melbourne Victory, Newcastle Jets, Perth Glory, Sydney FC and Western Sydney Wanderers[4]. Apart from Canberra United, the rest of the teams are affiliated to the mens’ soccer league, the Hyundai A-league. Each of these teams has its ‘brother-team’ playing in the mens’ league sharing colors and names. The W-League was a result of the good showing by the women national soccer team in the 2007 FiFA Women’s World Cup in China[5] where the team qualified for the quarterfinals for the first time. Following the successful outing, the then national team coach Tom Sermanni, who would later coach US women’s soccer national team[6] recommended that a professional women’s league be established to ensure continued development of players. The first game of the inaugural season of the W- league was played on 25th October 2008 between Perth Glory and Sydney FC[7] at Members Equity Stadium. Queensland roar won the W-league grand final in 2009 after beating Canberra United 2-0 in the final match. The Central Coast Mariners withdrew from the league in the 2010-2011 season due to lack of funding. However, after joining the men’s A-league in 2012-2013 season, the Western Sydney Wanderers entered a team in the W-League to bring the number back to eight[8].

Westfiel W- League season goes through 12 rounds running from  November to February. At the end of the season, the top four teams in the ‘ladder‘ advance to a semi-final after which they move to a Grand final. In the just concluded season, Canberra United won against Perth Glory in the grand final despite Perth Glory having finished at the top of the table of the regular season by 30 points, 10 points more than Canberra managed to gather[9].

Based in Sydney, New South Wales, Australia, Sydney FC has a direct affiliation with the men’s Sydney FC who play in the A-League. Sydney FC was established in 2008 and plays in sky blue, the state color of New South Wales. The team plays home games at WIN stadium, Jubilee Oval and Allianz Stadium. The club has had a relatively successful stint at the top flight division never finishing below the 4th place and winning the regular season twice in 2009 and 2010 while winning the playoffs in 2009 and finishing runners-up in 2010[10].

The only team in the W-League not affiliated with any team in the men’s A-League, it is a semi-professional women’s soccer club based in Canberra, Australia. The club color is green the same color worn by the National Rugby League Club Canberra Raiders from the same city. Its badge depicts the flagpole of parliament house, a symbol of Canberra. Canberra play their home games at McKeller Park in north Canberra. The club has been very successful especially in the W-League managing runners up in the inaugural season and winning both the regular season and the playoffs in 2010-2011 season. Canberra United dispatched Perth Glory 3-1 in 2014 to win the Grand final[11].

Affiliated with Melbourne Victory FC of the A-League and the Football Federation Victoria, this club represents Melbourne in the women’s league. The club has experienced relative success in the W-league winning the regular season championship in 2013-2014 and finishing runners-up in 2012-2013[13].

This club represents Perth Glory FC in the W-League and had a great season in 2013-2014 setting record for the most goals scored by a single player as well as most points by a club in the W-league, 30. The regular season champions lost 3-1 to Canberra in the Grand final of the plays offs[14].

The Newcastle Jets Women have not been lucky to win any championship in the W-league so far. With a win percentage of around 30%[15], the team has often found itself at the bottom of the ladder most of the time. The club is still trying to find its footing in the W-league and to catch up with the rest of the top teams in the league.

Founded in 2012, the Western Sydney based club is the newest of the W-league members. Success has so far eluded the newest member of the W-league only managing to finish between the 6 and 8th positions of the regular season and not qualifying for the playoffs a single-time in its four years at the top flight women’s soccer league[16].

The women’s and men’s soccer leagues in Australia are closely related in a number of ways but also different in numerous other ways. With the exception of Canberra United, the rest of the teams in the women’s W-league are paired with a men’s soccer team in the A-league. The pairing of men’s and women’s league teams is based on state federations. Both leagues are under the Football Federation Australia. The A-League was established in 2004 as a successor of the former National Soccer League while the W-League was born in 2008 as the first ever Australian Women’s soccer league. The men’s league is currently competed by 10 teams, 9 from Australia and one from New Zealand. While the W-League’s season runs from November to February and Consists of 12 rounds, the A-League runs from October to May and consists of 27 rounds for the regular season and just like the W-league has a playoff culminating in a grand-final. The winner of the A-League qualifies for continental competition, the Asian Football Confederation Champions League (ACL). The winner of the W-League does not qualify for any other competition.

A bigger difference is visible in the capacities of the stadiums in which the teams play, an indication of the crowd size attracted by the teams. The men’s league teams attract bigger crowds when compared to the women’s clubs. The table below shows the capacity of the men’s stadiums. 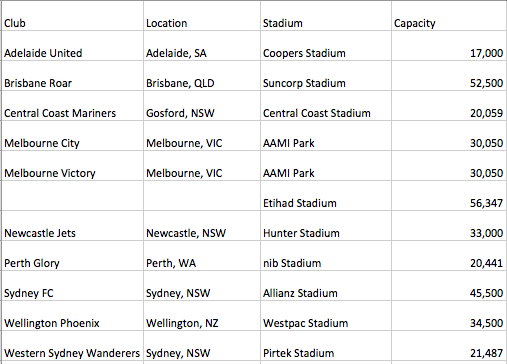 Compared to the men’s stadiums, the capacities for the women’s stadiums are much lower meaning even if more fans wished to attend the women’s soccer games they would be denied entry. An extreme example is in the Burton Park and The Shores, both stadiums for Adelaide United with a capacity of 1,200 and 1,000 respectively.In the men’s soccer stadiums, only Coopers Stadium for Adelaide has a capacity below 20,ooo standing at 17,000. 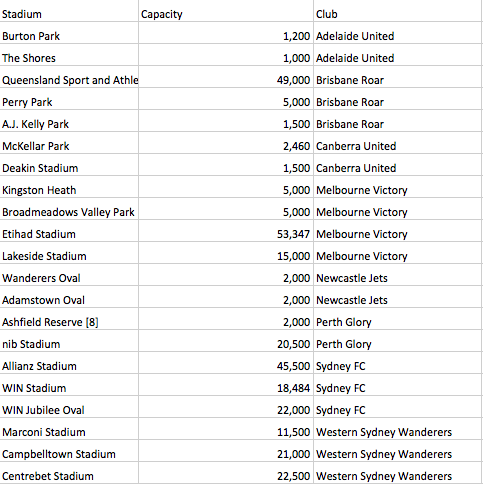 The women’s W-League has salary cap of A$150,000 for the entire team. In comparison, the men’s A-League has salary cap of A$2.35 million. In addition to the already existing big difference in salaries available between the women’s and men’s clubs, the A-league clubs are allowed to sign three “marquee” players whose salaries are exempted from the salary cap. This includes two foreign players and one domestic “marquee” player.The A-League salary cap has also been on a consistent rise since its establishment in 2008. 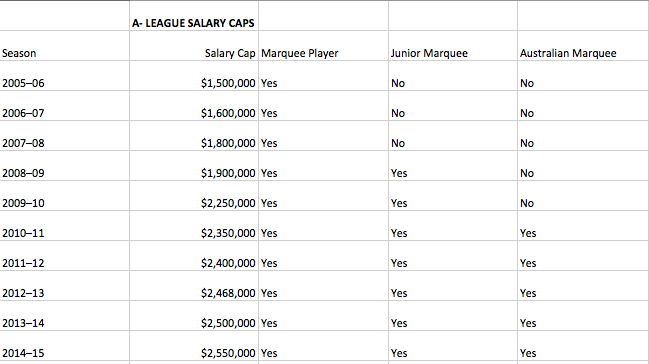 W-LEAGUE RELATIONSHIP TO THE NATIONAL TEAM 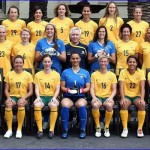 The W-League was a product of the national team activities. When the Australia women’s national team qualified for the FIFA world cup for the first time in 2007 in China, the team excelled up to the quarter finals. Following the successful outing, the team’s head coach recommended that a women’s league be established to sustain the success.  The Football Federation Australia(FFA) heeded the call and established the W-League the following year[22]. 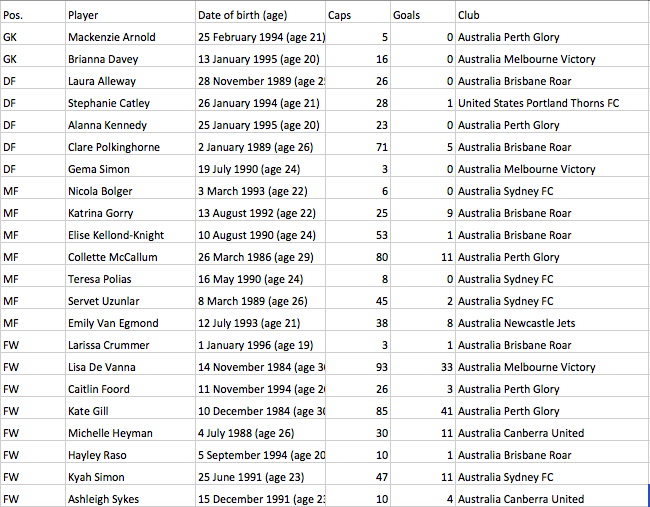 The W-League has contributed immensely to the improvement of the performance of the national team since its establishment in 2008. Since 2008, the team has qualified to almost every major women’s soccer event and performed well. In 2010, the Australia women’s soccer won the AFC Asia Cup taking home its first major trophy in international competitions after beating North Korea 5-4 in penalty shootout after a 1-1  draw at the end of extra time. The team also made it to the 2011 FIFA World Cup quarterfinals and the 2014 AFC Asian Cup finals where they lost by 1 goal to Japan. This kind of success at the international level was not there before the W-League was established. The fact that the national team is made up entirely of players from the W-League is another testament as to how big a role the league is playing in player development and ensuring success for the national women’s soccer team.

One of the benefits of the national team having all of its players coming from the W-League, is that years of playing with each other or against each other is an opportunity to learn each others style of play. After learning each others game either as an opponent or a teammate, it becomes easy to form a team and have ‘good chemistry’ immediately which leads to good results in the competitions. Having all players from the domestic league is also a sign of patriotism and pride in the domestic league. It helps inspire the players to want to fight more for their country as they all share love for the country.

It is the offseason and a big number of W-League players will be competing at the 2015 Women’s FIFA World Cup in Canada. Meanwhile, six coaches have been selected for a mentorship program[24] by the Football Federation Australia. This program, made possible by the FIFA Goal Project funding and the Australian Sports Commission’s Women Leaders in Sport, aims to increase the number of advanced accredited female coaches who possess the necessary knowledge and experience to coach at the highest level.

Soccer fans were treated to a rare but wonderful experience earlier this year when they got a visit from the FIFA Women’s World Cup Trophy[25] just before their team travelled for the 2015 FIFA women’s World Cup in Canada. This has been seen as a FIFA’s way of showing how far women’s soccer in Australia has come and the progress it continues to make.“Girls used to get access to the field once or twice a week and it wasn’t really taken seriously by too many clubs or associations at that level,” Westfield Matildas Head Coach Alen Stajcic . The FFA Head of Community and Women’s Football, Emma Highwood added her voice saying, “We’ve certainly put a lot of effort into women’s football but I think now we reached the tipping point where it’s getting credibility and resourcing from state federations, national federations and clubs so once we go down that track ultimately within time if you put the effort in you’ll get the results.” It is true indeed that the Australian women’s soccer is well on its way to greatness as evidenced by the progress it has made in the last few years especially after the establishment of W-League in 2008. In A Beautiful Game, Jean Williams remarks that, “In spite of the political controversies that have occurred within and around the rules and regulation of national and international associations, there is plenty of recent success in Australian women’s soccer at various levels.”[26]