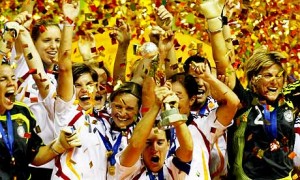 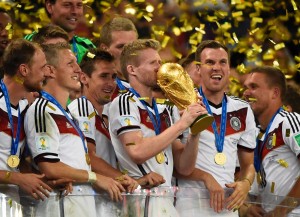 Differences between the German Men’s and Women’s soccer teams

In my analysis of the differences of playstyles within women’s and men’s soccer teams, I will be focusing on the German team. First of all, Germany is currently ranked as the number one women’s soccer team in the FIFA rankings with the most points. Within the few matches I have watched, a bunch of things stuck out and I will go over these. The first thing that I saw was that was that there was much more free area for players to move within the goal area and the red zones than men’s matches, creating more opportunities for the attackers then in men’s games. I have watched a couple matches from different periods of times, and I can easily say that the German teams passing accuracy, ball control and understanding of the game has evolved immensely over time. Another thing I realized is that there are more goals in matches then I’m used to, and the games seem to be much smoother in a sense of playstyle. From what I’ve seen, there were only several shoulder to shoulder harsh game play. Speed was a point that I realized that was different, the games were certainly slower, but with that being said, the accelerations for the most part were the same to what I’m used to. The games tend to be stopped less, as it seems that the women’s soccer is not that much into “faking injury” and stalling games as much as I’m used to. I was certainly able to analyze certain strategies the teams used within the match in an easier manner due to the fact that there were less tackles, set pieces for example seemed to be very clearly From a tactical stand point, Germany tends to play a very pass oriented game combined with outstanding tactics for any standards. The defense seems solid from what I’ve seen and they use the flanks to counter more than the other teams they faced do. They used and relied much more on teamwork compared to the other teams they have played for the most part. In one of the matches they played versus UK, while taking less shots than them, the German team used the flanks much better and got 2 side to center header goals, resulting in a 3-0 victory.

The first huge difference that can be very clearly seen is the marking zone difference between the teams. Even though both of the teams have a lot of marking and professional defensive tactics, the shoulder to shoulder style of the men’s team is much more evident and causes much less opportunities to attack. The foul numbers are directly relevant to how harsh of a soccer the teams are playing and how strong they are marking. The German men’s team is arguably plays the world’s best defensive midfield and backfield game. The Mertesacker-Khedira-Sweinsteiger-Howedes back line is impenetrable for many of the other teams. For the women’s team, the Germans actually tend to play with a very similar mentality during their games, and even they have losses, they are very low scoring games unlike other games that are played in the women’s soccer world cup. Marozsan and Laudehr have created a very defensive mid field in every game I analyzed. As a direct cause for this, the German team has had incredible games such as their 9-0 win against Russia and 13-0 win against Slovakia, without accepting any goals and scoring incredible numbers. I thought about analyzing the Russian-German game however this was too much of a land-slide victory with Russia having only 3 attempts and one on target while Germany had 31 attempts on the goal, 16 of them on target and more than half of those as goals. 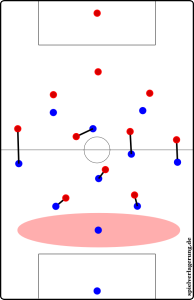 With the help of some great resources from FIFA and my own analysis, I have come up with some numbers to compare the women’s and men’s soccer. The first statistic to be covered is the speed of the games. Within the games I analyzed, the women’s soccer team has done 55 sprints greater than 25 km/h while the men’s team has done that 220 times. There were 400 women’s 18-20 km/h runs and 550 men’s runs. The only category that the women’s had more runs compared to men’s were the low speed run’s ( <12 km/h) which was 200 less than the 7200 women’s runs. Does this mean that the women’s game is more boring to watch? Absolutely not, it just means that the games are slower paced, making the strategies and tactics easier to analyze, creating a better spectacle in that sense. Another quick note to add is that Germany, while being the best women’s soccer team, is not the fastest.( 12th on the speed rankings ) And comparing them to the German men’s team who has some of the fastest players such as Lahm, Ozil, Kroos was one of the reasons why the numbers came out like this. The Canadian team for example had 130 high speed sprint runs which is a much closer number than the German teams.

The second big thing to analyze is the shots per game within the matches, and this is where the stats get interesting. The German men’s soccer team has averaged a 14.8 shots to the goal within the last world cup with a great 63 percent accuracy rate. The women’s team however have averaged more than 20 shots per game (the numbers fluctuate between the games a lot since the amount of good defending teams aren’t as much for ex. Russia-Germany and Germany-USA are two very different matches and the fluctuation between good and bad teams are more severe than the Men’s soccer teams) with an average of 3.8 goals per game, which is almost impossible for the men’s game. This aspect of the women’s soccer game creates a more fluid game, filled with a lot of attempts at the goal, with a pretty good accuracy. The German men’s team had around 2 goals per average in the last tournament they were in.

One more thing to analyze is the number of tackles within the games. Even without official numbers, the men’s matches are much more brutal when it comes to tackling. Even though it is true that the men’s soccer tends to fake injuries a lot, it is also very accurate that there are very brutal situations. There are around 20-25 tackles (hard tackles) averaged per game with around 15 of them actually being turned into fouls in the men’s game. This number is way lower for the women’s game, which creates a freer environment for the attackers to use their skills and intellect better. This is probably the biggest reason behind the number of high scores and attempts on goal.

Last thing to analyze is the passes attempted and completed within the matches. German men’s team is the best national soccer team when it comes to the passing game. They have averaged a 674 passes attempted per game with more than 90 percent accuracy in those. This creates an incredibly enjoyable game to watch while they use this to overcome their opponents. The pass average for women is around 500, however it sits at a much lower accuracy of around 70 percent completion. Again for this part, the German men’s soccer team is probably the best passing national team.

Even this is a link from Bayern, the play styles of Bayern and the German national team is very similar.

A very clear example to this is from the Germany-Brazil game in 2015. The position and the tactic that Germany imposes can be analyzed in such clarity that isn’t available in many of the men’s games. In this position, in a regular men’s soccer match, the speed and brutality of the entire position would have been much more. Due to the unique nature of women’s soccer, I could analyze a bunch of different aspects. For example, the Brazilian team, mid-position tries to pull an offside trap, however is not successful due to one player. The lack of tackle from the Brazilian mid-field creates the position in the first place.

To sum up, the German team plays a very tactical fluid game combined with passing and great defense, relying on taking the ball to the sides and using their header superiority. It was overall fun to watch their games. It was a great opportunity for me to see the differences between the men’s and women’s soccer teams. The German mentality of organized, fast paced, accuracy football can be seen in both the men’s and the women’s teams. As time goes on, I believe that the women’s soccer will evolve into a much better game, while to my perspective, always staying different than the men’s game.

One thought on “Germany: Women vs Men”